Leon is a 5 star character with pretty good stats and plays the Physical Damage role. Leon is a pretty versatile character and has a plethora of good skills that fit his play style.

He lacks any magic making him slightly less useful as some other Physical Damage characters who can manage both ends. But even with out it he plays the role well all the same.

He has the basic buffs that most physicals do. You got his STR and DEF boosts, you got attack boosts that make his basic attack stronger, then you have his actual active damage dealing attacks.

Two of these attacks are built to do Dark Physical Damage which can be helpful just to add the element effect on there. Another Load and Blackout are great Dark Physical moves that deal decent damage and have the added element.

Aside from his added Dark effect he has some nice damaging basic physical attacks as well. Barrage and Maverick are two of these attacks and will probably become one of his staple attacks when he’s in the higher levels.

His final skill is Phantom and it’s a pretty good one. It deals two physical damage to all enemies on the field basically being a super powered double attack.

Away from his skills we also have Leon’s limit burst, Dark Ambition. This LB is good for him cause of the dark physical damage it does but it also has a chance to confuse enemies as well just adding the extra effect.

His equipment is pretty decent too giving him a wide variety of ways to use him and that’s always a plus. Honestly for down sides all I can think is that he has no magic and his SPR could be a little better.

Verdict: A very good character if you’re looking for a physical attacker

Leon is neutral to all elements and status ailments.

Leon can equip 5 weapons and 7 armors

A young man who appears in tales from a distant world, where he features in a story of an empire and the rebellion against it. After the Palamecian Empire gains control of Fynn, Leon leaves the empire’s forces to become the Dark Knight.

He is then tasked with the building of the Dreadnought and serves as the right-hand man of the Emperor, doing his bidding throughout the land. Leon encounters Firion and the others under the guise of the Dark Knight numerous times, but it was not until they heard him speak that his sister Maria recognized his true identity. 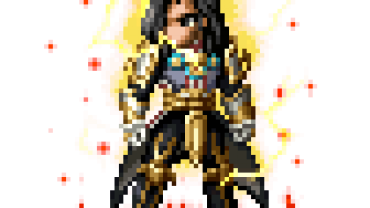