Welcome friends to the Pokémon Duel Tips and Tricks Guide. This guide is designed to go over the basics and mechanics of the game to give you a better idea of how to play. And provide a few helpful tips to make the game easier for you. 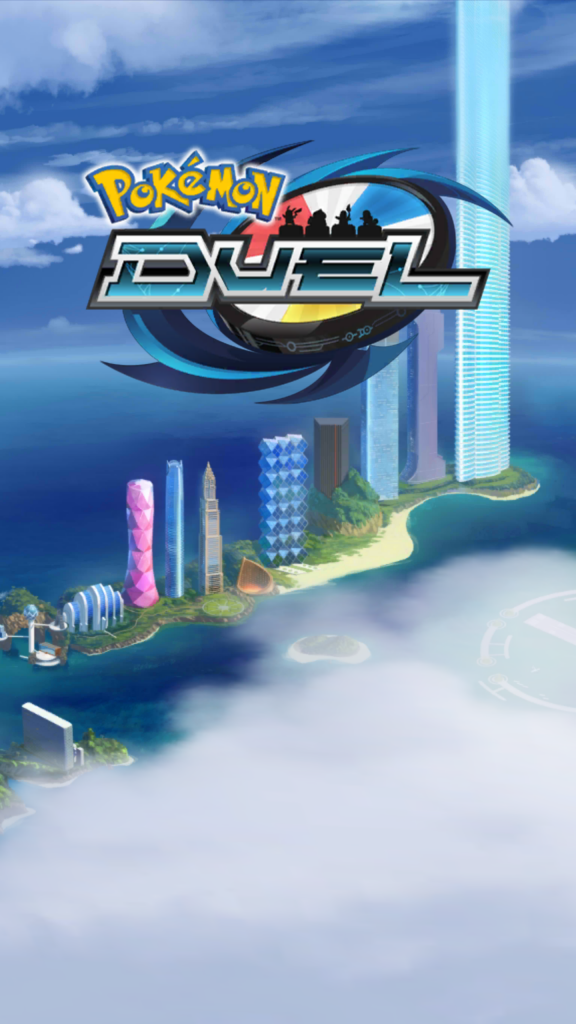 Pokemon Duel is an interesting little game that stands out from all other Pokemon games to date. It’s a strategy game that revolves around battles with figurines.

It’s very reminiscent of old school board games and follows similar formula’s. You’re given a deck of 6 figures to use in a game which any Pokemon fan will understand. 6 is the limit no matter what. 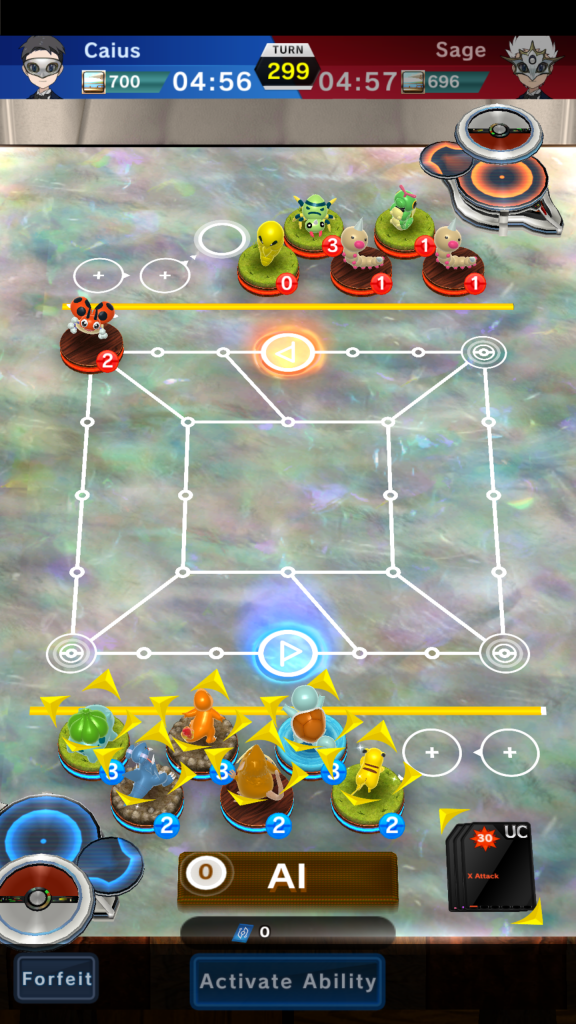 With your 6 Pokemon you move them across the playing board which is a grid of white lines and dots. Your goal is to get your Pokemon onto your opponents colored spot before they reach yours.

Get to the spot and you win, simple as that. But along the way you have to get around your opponents Pokemon figures and if you run into one a battle begins.

Battles are super simple and probably the reason this would make an amazing board game. Each figure has their own set of attacks and when in a battle they are chosen via spinning wheel.

Both figures spin their wheels and whatever they land on is the attack they use. There are three different spaces on the wheel in most common cases.

Attacks, which are numbered damage. Special attacks, which can be things like Smokescreen or Light Screen. And Miss, which flat out means you miss your attack.

So the game itself is pretty simple and the tutorial does a fairly good job at explaining everything. But aside from the basics of the game there are a few other sections that can give off some good information. 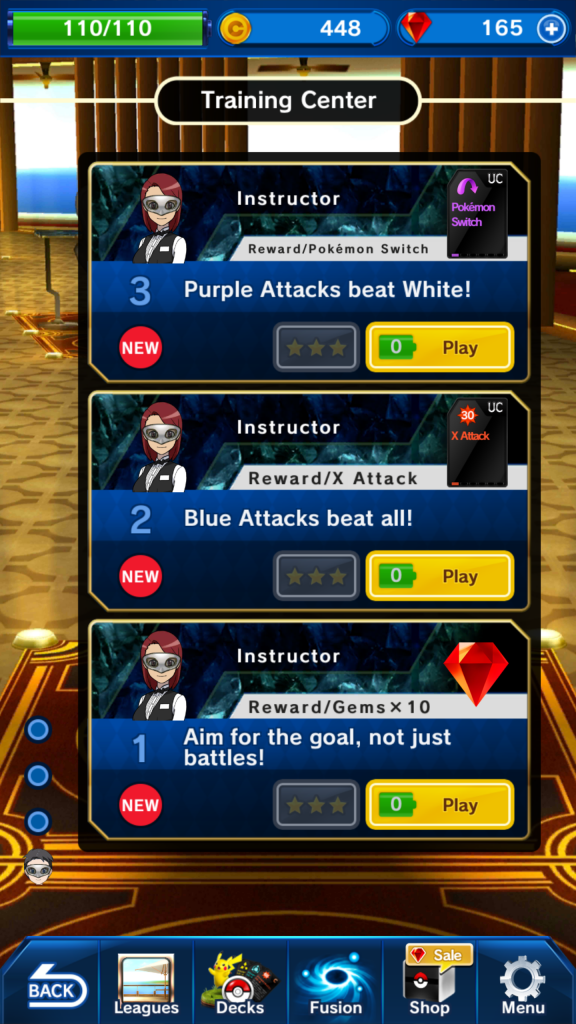 In each one you play the same game but a few things may be more focused on than just winning in general. And each time you succeed in one you get a prize.

Sometimes it’s gems or it can be an attack card or even a Pokemon figure. Doing the Training Center missions are extremely helpful and worth the time. 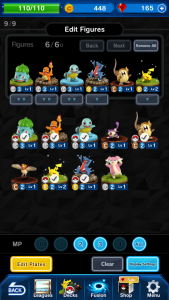 The main part of this game is obviously the Pokemon! You wanna have as many as you can get, catch ’em all and all that fun stuff.

There are a lot of different ways to get Pokemon Figures in the game. You can buy them with Gems like most games that involve different character pulls.

You can get them from Booster Packs which are some times given out after fights. But you can also buy them with Materials.

Material’s is another form of currency in this game where you can go into the shop and browse available Pokemon Figures. Each figure is priced differently some are low around 250 while others can be upwards of 4000.

This is the best way to get Figures by just saving up your materials until you have enough for the one you want. It’s better then trying to random it and just hoping you get something new or something you like. 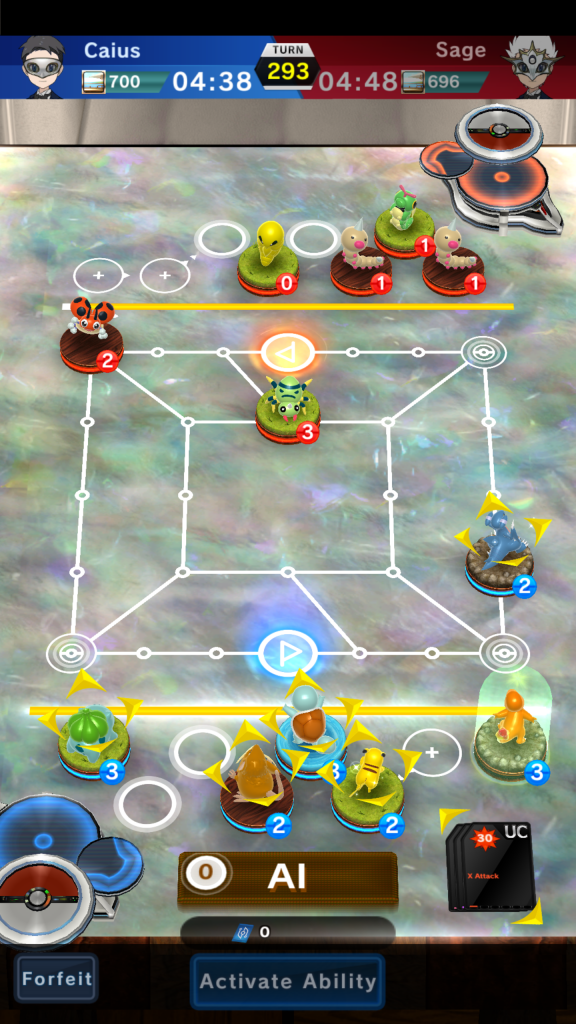 So the point of Pokemon Duel being a strategy game is 100% true. Yes its very easy to just play your figures and work your way across the board but as it gets more difficult you’ll have to really think out your moves.

You can only move 1 Pokemon Figure per turn so you first off need to decide which 6 to have on your team. Don’t just fill up on 6 Pikachus or something, be strategic about it.

Go all different types you can never go wrong with a Grass, Water, and Fire. Fill out the other 3 with any of the types you have available to you.

Or if you know certain team setups it can be a good thing to stock up on all the same type. There is a build where Manaphy deals more damage when on a team with all Water types so it’s okay to watch for things like that.

Once your team is set the first things you wanna do is get 2 Pokemon Figures out on your side. Take two turns to play two, it’s always best to have at least two out that way you can have a Pokemon protecting both sides of your field.

Playing the game safe is not a bad thing either, making smart moves over rushing to the end is always the better strategy. Just work your way around and to the goal while taking out Pokemon and try to get at least 3 out per match.

After a while the game will come natural to you and you’ll be all set with tons of Figures and a team you’re in love with. So just keep playing and it’ll all come together on its own.