Batter up! Hit the home run with this Tap Sports Baseball 2016 Tips and Tricks Guide. Here to help you step up to the plate and avoid striking out in the big game.

The events section is a great way to farm money from just playing a match, and money, gold and players through league / leader board standing. For example with the weekend competition, the Daily and Weekly boards share stats, so as long as you maintain a high position on the leader board in either event you will walk away with gold or cash. 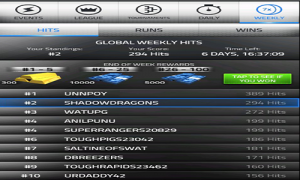 Tournaments require an entry fee to play and they match you off vs the computer for the chance to win a player. I didn’t find this to be worth the time investment as the games were single elimination. Which means they aren’t worth the time unless you have a really strong team.

League’s allow you to set up a group match with other players, it’s a nice way to grab a bit of cash and compete for a larger reward. You can play all of the matches in a row and then check on the league when the timer finishes.

For the most part, you can auto play almost every match in the game, except for games against other players. In these games you will have to do every batting round. But against the AI you can choose to either auto play or bat yourself.

If your team is equal or better than the team you’re going against you will usually win every game with auto play unless one of your players is tired. Around the 7th inning is when you want to watch for dramatic shifts in the score to see if you have to manually bat to win a game.

Ball or Strike out

You may notice when you go up to bat that the other team’s pitcher is throwing wildly. The ball going wide to the outside or almost hitting your player. This could be because they have bad arm and control stats, leading to horrible pitching accuracy or the player is extremely tired. In situations like this, just wait and let the AI walk your batter. Swing only if the ball looks like its going to hit the strike zone and you’ve got 2 strikes and can’t risk waiting. 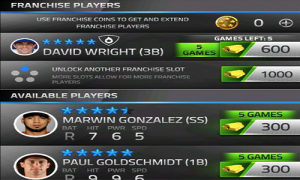 While you’re up to bat you will occasionally get situational prompts to either bunt or steal a base depending on the situation. Bunting is something you can typically get away with if your runners on the bases have a high speed stat and the batter has a high Bunt stat. But be mindful that a bunted ball could roll directly to the pitcher resulting in an out. 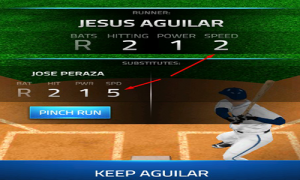 This also goes for stealing a base using bunts and pinch runners. The higher your players speed, usually around 7+, the greater the chance of success. Call in a pinch runner if your current player has a low speed stat. If you feel your runner is fast enough, sometimes its better to take the strike and not hit the ball if your current batter has weak hitting and power stats.

An important part of Tap Sports Baseball 2016 is the upgrades you can apply to your team.  Go to the Team menu, then upgrades to find a list of bonuses you can add to your players. Starting out you may want Hitting Coach and Trainer to have an easier time scoring.

Gameplan is used by the AI for both your defensive management and for when you use auto play. You can set this to your liking but i’ll include my current set up below. 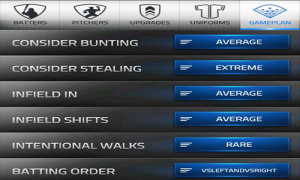 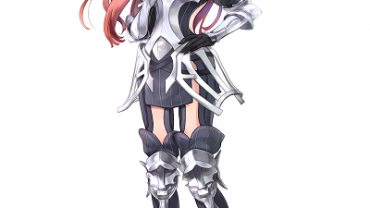