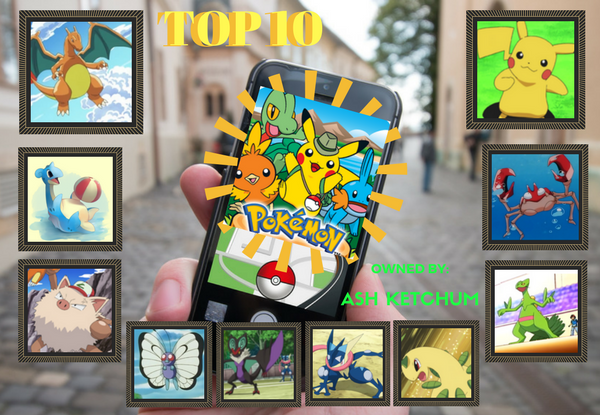 Hello friends and welcome to another Top 10 Pokemon. This one is about the top 10 Pokemon that Ash Ketchum has captured through out the run of the anime series. We can all agree that Ash isn’t the best trainer out there but some of the Pokemon he catches are pretty cool in their own right. 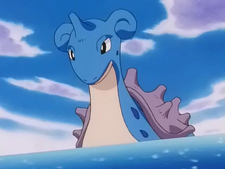 The first entry on this list is gonna be the first Pokemon Ash caught in the Orange Islands. Lapras is a Water/Ice type and one of the best Pokemon defensively.

Ash finds this Lapras washed up on a beach in bad condition and through the course of the episode ends up dealing with Team Rocket and befriending the Lapras.

Out of all his Pokemon through out the series Lapras didn’t play the biggest part in the main story, simply because the Orange Islands was purely a filler section. But that doesn’t discount Lapras as one of his better Pokemon by any means. 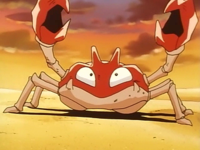 Next up is the Water type Krabby and a memorable Pokemon to anyone who watched the series. Krabby was Ash’s first exposure to the 6 Pokemon per team rule.

When he catches the little guy the Pokeball vanishes and is taken to Professor Oak. We later learn find out that the Krabby Ash caught was small in comparison to some others, Like Gary’s Krabby which was pretty massive.

Krabby doesn’t play much of a role in the beginning but towards the Indigo League he gets a huge moment to shine when he evolves into Kingler. And as Kingler he really earns his place as a part of the Ash Ketchum team legacy.

Number 8 is Noivern, the 5th Pokemon Ash obtained in the Kalos region. Noivern is one of the only Pokemon Ash gets as an egg and raises all the way up to its final evolution.

Noivern himself is a great Pokemon just by his type and use in battle alone. But what he brings to Ashs’s team and the rest of the shows dynamic is great.

The connection he has to Ash’s Hawlucha is a major part of Noivern being on this list. Many of Ash’s Pokemon have personal connections to each other but there is a real brotherhood between Noivern and Hawlucha.

Noivern is used in the Kalos league in a fight against a Weavile which he ultimately ended up losing. But even so he stood up well against it despite the massive type disadvantage.

Noivern now sits at Professor Oak’s lab with a slew of Ash’s Pokemon while he is off in Alola. 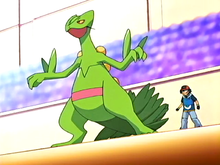 Sceptile is one of the Hoenn starters and like usual Ash ends up with either one or all three of them. In this case he caught Treecko which had quite a character arc through out the series.

After being caught by Ash, Treecko had a bit of an attitude. Always wanting to be strong and this causing him to butt heads with some of the other Pokemon like Corpish.

Treecko fought in several of the Hoenn gyms and in most cases he lost. But in some he’d fight a second time and be the reason Ash obtained that gyms badge.

As the series went on Treecko eventually evolved to Grovyle in a fight against a Loudred and eventually evolves into Sceptile being used in many of the end season league matches. Sceptile was probably the most important Pokemon on Ash’s team while he was in Hoenn and like most others ended up back at Professor Oak’s lab.

Ash’s Bayleef was one of the better Pokemon he caught in the Johto region and i’m judging better based off it’s character. Bayleef started as a Chikorita who had an attitude similar to Treecko and didn’t back down from anything.

In it’s first battle it went up against Charizard despite the massive difference in power. After being injured, captured by Team Rocket, and then saved it decided to join Ash’s team.

Through out the series Chikorita’s personality was the one that stood out the most among the other pokemon on his team. And when it evolved into Bayleef it staid almost the exact same way.

Not realizing it had even evolved and still thinking it was small enough to jump into Ash’s arms and basically still acting like a Chikorita. Bayleef took place in some of the league matches most notably against a Houndoom and Blaziken.

Ash’s Greninja is probably one of the most interesting Pokemon in the entire series. Much like Treecko and Chikorita, Geninja started off as a Froakie with an attitude problem.

Thinking it was to good to ever have a trainer and never letting anyone catch it. Until Ash comes a long and for some reason it feels that he is good enough to use him.

Froakie’s whole arc in the show is that he is special in some way and is going to bring forth saving the entire Kalos region. This gets pushed further when he eventually evolves into Greninja.

Greninja is the only Pokemon ever to change it’s appearance based on it’s trainer. Because of it’s powerful bond to Ash it actually takes on certain aspects of his appearance onto his own.

Greninja is by far Ashs’ most interesting pokemon in the Kalos region not only because of it’s character but the Pokemon is actually given a written destiny. Ash only leaves him behind so he can stay and protect Kalos like he was meant to.

Now Primeape can be seen as an interesting choice for this list because of how little it’s ever shown. Primeape is only in a handful of episodes in the series but the ones he has are some of the most memorable.

As a Mankey, it comes across Ash and friends whose looking to start catching more Pokemon after hearing Gary already caught 30. Ash tries to capture Mankey only to end up in a chase of hi jinks and other issues.

Through the episode Mankey evolves out of anger into Primeape and goes on a rampage. Ash tries to use Charmander to beat it only to lose rather quickly.

Primeape then brings down Team Rocket and is eventually caught by Ash. He never really loses his anger and crazy personality which is why Ash rarely uses him.

He does however get his moment to shine during the P1 Grand Prix tournament. He has a bonding moment with Ash finally bringing them closer and goes onto win the tournament in the end.

Afterwards Ash leaves his Primeape under the care of Anthony who was also in the tournament. Primeape may not have been the most used or popular Pokemon in the series but the small part he played left a very big impact. 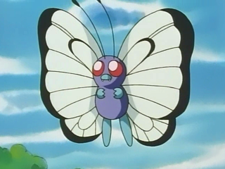 Now we’re at the top 3 and kicking that off is the very first Pokemon Ash ever caught and the one that probably destroyed most our childhood emotions. Butterfree is number 3 and highly deserving of it.

Ash first found Butterfree as a Caterpie in Viridian Forest and catches him out right by throwing a single Pokeball. Afterwards Caterpie sticks to Ash as a loyal friend and partner.

During a fight with Team Rocket Caterpie evolves into Metapod. And upon the Beedrill attack evolves into Butterfree.

Finding a mating ground of Butterfree’s, Ash’s tries to find his mate only to be turned down. After saving the entire horde from Team Rocket his pink Butterfree accepts his courtship dance and they pair off together.

Because of this, Ash has to release Butterfree in order for him to live freely and happily with his mate. The moment is sad and heartbreaking but the memory of Butterfree sticks with any of us who watched as a kid.

Now some of you maybe surprised by this choice making Ash’s main Pokemon number 2. By this point if you’ve ever watched the show you probably already know who number 1 is gonna be.

Pikachu is the most recognizable Pokemon in the series and is the very first one Ash ever gets in the show. Starting off as an ungrateful little mouse with anger issues, Ash does everything he can to get Pikachu to work with him.

Only when they are attacked by a horde of angry Spearow and Ash risks everything to keep Pikachu safe does he finally show respect. After that, everything else is history.

Pikachu has been in every single season of Pokemon and goes to every Region with Ash. He’s also one of the most interesting Pokemon because of how inconsistent he can be.

In terms of battle, Pikachu has probably beaten every type of Pokemon including those he shouldn’t be able too. Yet he can still lose to ones he should have no problem with.

In his first match with Brock, Pikachu has no effect on his Geodude or Onyx due to them being Rock and Ground types. But he can take out Rhydon who is the exact same type.

Pikachu is hilarious in his inconsistencies, personality, and all around charm he brings to the show. But there is one other who just bumps him out of the number 1 spot.

Number 1 is the king of Pokemon attitude and probably expected by many of you who’ve watched the show before. Charizard is the meanest and most disrespectful Pokemon Ash has ever had but he is also one of the coolest and strongest.

Starting off as a Charmander who was abandoned by his trainer and left to die, Ash comes across him and saves him. With no real issue in becoming friends Charmander willingly joins Ash’s team.

After dealing with a horde of rampaging Exeggutor, Charmander evolves into Charmelon and we are introduced to the animes first instance of “Not enough trainer badges”. Charmelon becomes disobedient to Ash because his skill level out matches his trainer.

In the games you had to have a certain amount of badges to make higher level Pokemon obey you with no issue. Charmelon was the conduit to bringing in this concept from the game into the show and it was done wonderfully.

Even more so after he evolves into Charizard keeping his bad attitude and disobedience but still being strong enough to win most of his fights with out even listening to Ash. One of his most memorable probably his fight against Blaine’s Magmar.

Eventually after several seasons and regions Charizard grows to respect Ash and they become much closer. After being left at the Charicific Valley to train it reappears several times through out the series.

Even showing up in the third Pokemon movie within the shows canon to save Ash and Pikachu then return to the valley afterwards. Charizard has never staid away long and even in recent seasons has shown up once or twice.

He is one of Ash’s best Pokemon, as memorable as Pikachu, and one of the most interesting in the entire show. And that’s why he deserves the number 1 spot. 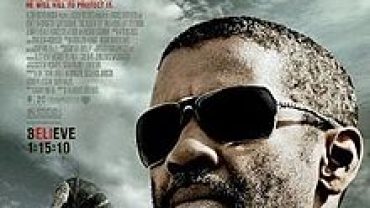