Guy is a 5 star character with pretty good stats and plays the Tank, Support role. Guy is actually a very good tank and will be able to hold up against even some of the stronger enemies.

Now his skills are set up like any basic tank giving him the ability of taking hits and being able to last. Draw Attack immediately raising his chances to be targeted by enemies.

He has the basic health boosts you’d expect on a tank to push his HP over the edge to make him more beefy. But he’s also got Nature’s Protection which cures Poison, Blind, and Silence and that’s real helpful.

HP stroll is a good ability healing 5 HP every 3 steps. His attacks however only come in three physical varieties one of which is his final ability.

So both of those moves are good heavy hitters for a tank. But his final ability is a really good one for him to have.

Full Break deals heavy physical damage but also lowers the targets ATK/DEF/MAG/SPR all at once by 30% for 3 turns. So dealing damage and lowering those is exceptionally good.

His Limit Burst, Gaia’s Howl, is pretty good as well, nothing to special just a good heavy hitting earth move. Always nice to have some kind of elemental coverage on a character.

I’d have to say as far as down sides go, Guy’s is probably in his stats. Yes they are good for the role he plays and the rank he is but it wouldn’t hurt if he had a little higher of defense. Other than that he’s actually well rounded and has very little downsides.

Verdict: There are better tanks in the game but he is not a bad one to use if you’re looking

Guy is neutral to all elements and status

Guy can equip 6 weapons and 6 armors

A young man who appears in tales from a distant world, where he features in a story of an empire and the rebellion against it. Guy is a gentle-hearted lad of great prowess and stature who decided to join the rebel army alongside Firion and Maria after his homeland of Fynn met its destruction at the hands of the Emperor.

He uses both his strength and his unique ability to communicate with animals in order to protect his friends throughout their journey. Vowing to fight until peace returns to their world, Guy continues supporting Firion every step of the way. 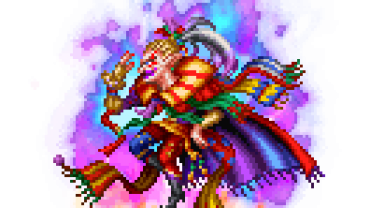