Hello friends and welcome to the Bleach Brave Souls Review for Katen Kyokotsu. In this review i’m going to go over this character’s stats, attacks, good team placement, and general usability in battle. 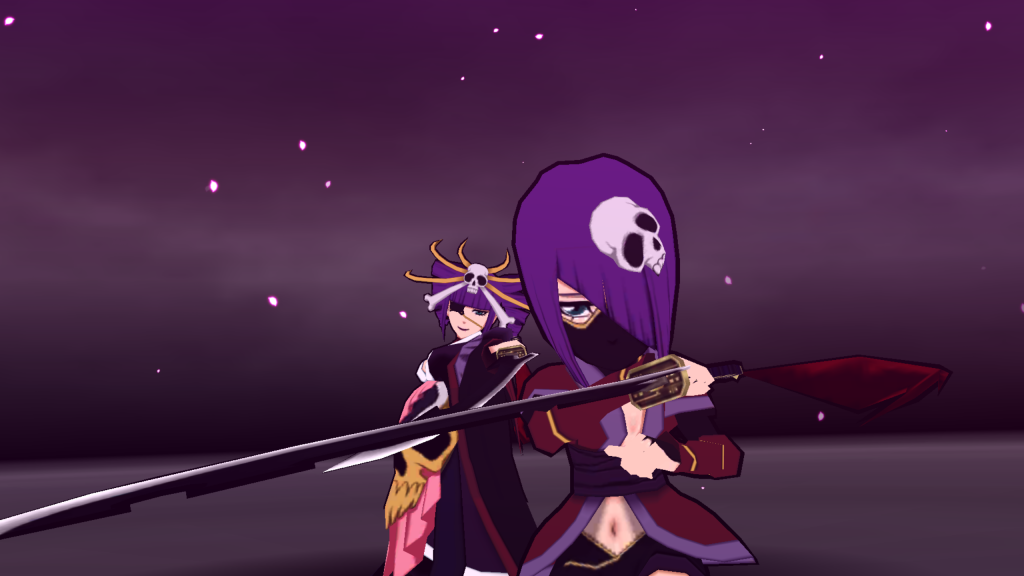 Katen Kyokotsu is a character released in the Struggle Zanpakuto: The Alternate Tale gatcha. She is the Zanpakuto spirit of Shunsui and a Focus(Orange) character. 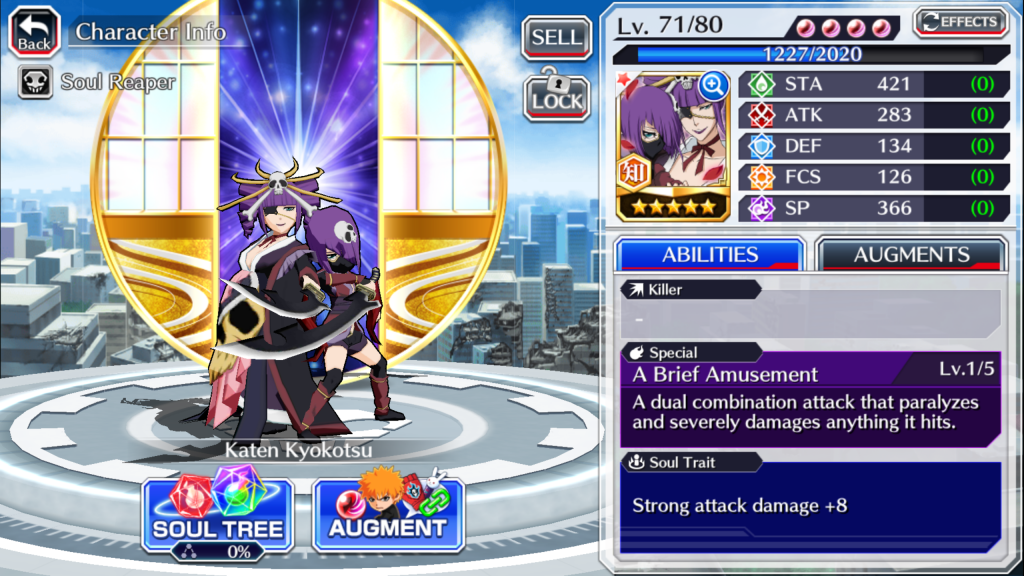 Katen Kyokotsu is an all around average character when it comes to base stats. At max level 5 star her stats are just above the average 5 Star.

Where at 6 Star max her stats don’t change to terribly much aside from her attack. Katen Kyokotsu is a close quarters fighting character so her attack is very important.

Her Spiritual Pressure is another stat that increases more than the others. She is very heavily dependent on her normal and strong attacks being viable which can make her either very easy to use or some what difficult.

When equipping accessories and character links to Katen Kyokotsu you want to give her things that are going to make her pros further out weigh her cons. Her Focus and Defense are so so, getting much better as a 6 star.

Katen Kyokotsu can also be used as a Chappy character with how good her basic attack is. So equipping her with an orange Chappy could be very beneficial if you learn how to use her.

As a 6 star, Katen Kyokotsu gets skills in her soul tree much like every other character in the game. Her skills all focus her into becoming stronger with he basic and strong attacks.

So all around Katen Kyokotsu is a great attacker but we already knew that. What we’re looking into now is exactly how good her strong attacks are.

All of her strong attacks are very similar to the Heart(Purple) Shunsui and have similar effects. The main difference is her special attack that has a pretty helpful side effect to it. 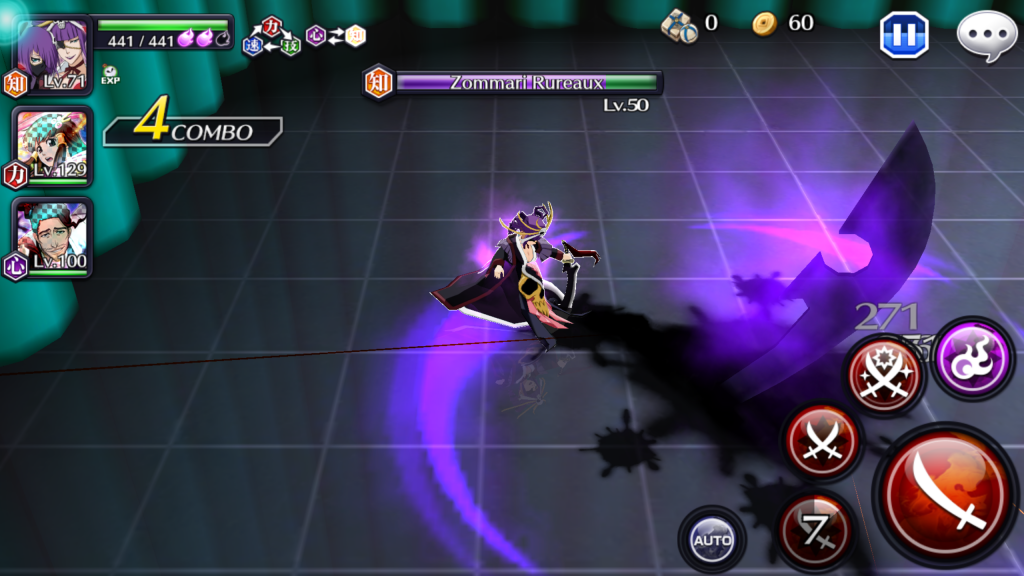 Katen Kyokotsu’s first strong attack is the exact same as Heart Sunshui’s. She stabs her sword into the ground causing a shadow version of it to strike from below her enemies.

It has a decent range to it and can hit multiple enemies at a time. It’s a good move to use at the start of an attack combo or at the very end. 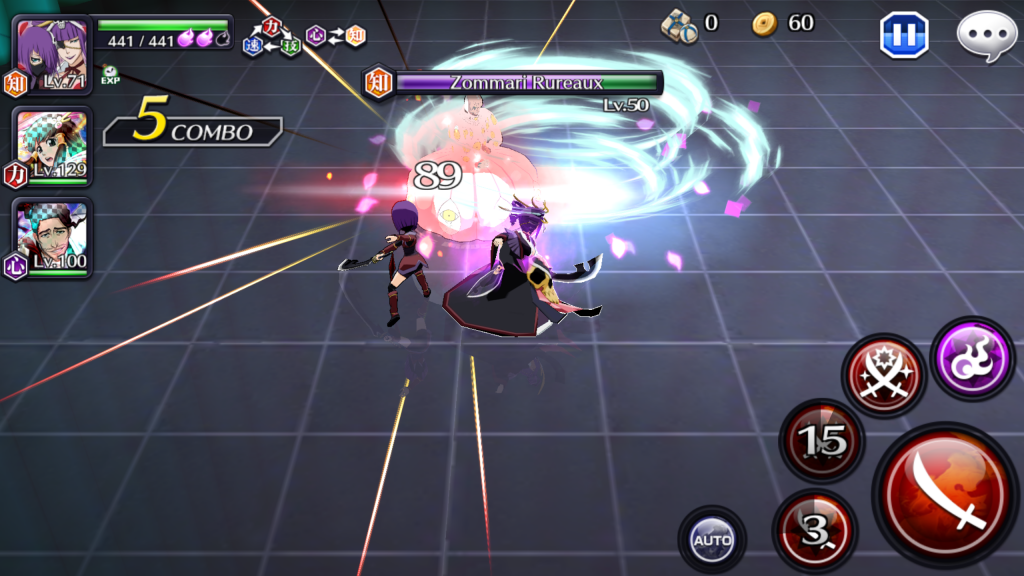 Katen Kyokotsu’s second move is once again like Heart Shunsui. Both spirits each take a sword and swing together creating a vortex of wind in front of them.

The vortex catches enemies in it damaging them and keeping them from moving for a short time. So while they’re stuck you can throw attacks on top of the damage being down by the vortex making it great move to use on groups. 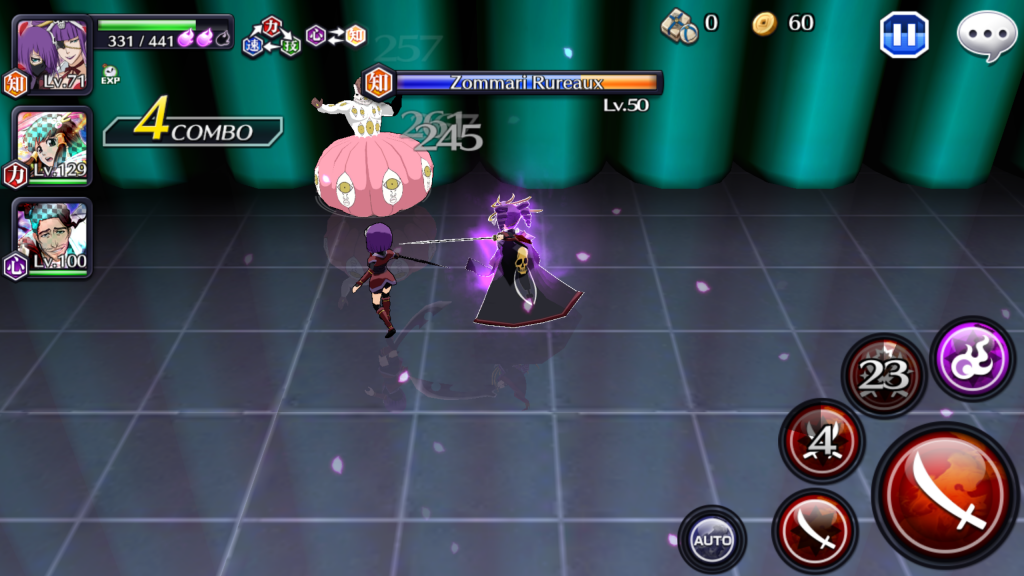 Katen Kyokotsu’s third move is different from Heart Sunshui. Both spirits take a sword and each slash together in an X formation creating a bright pink energy effect.

The attack hits hard and has range similar to her first attack. It also has a knock back effect so anything it hits will be knocked back and most likely guard broken if it has that. 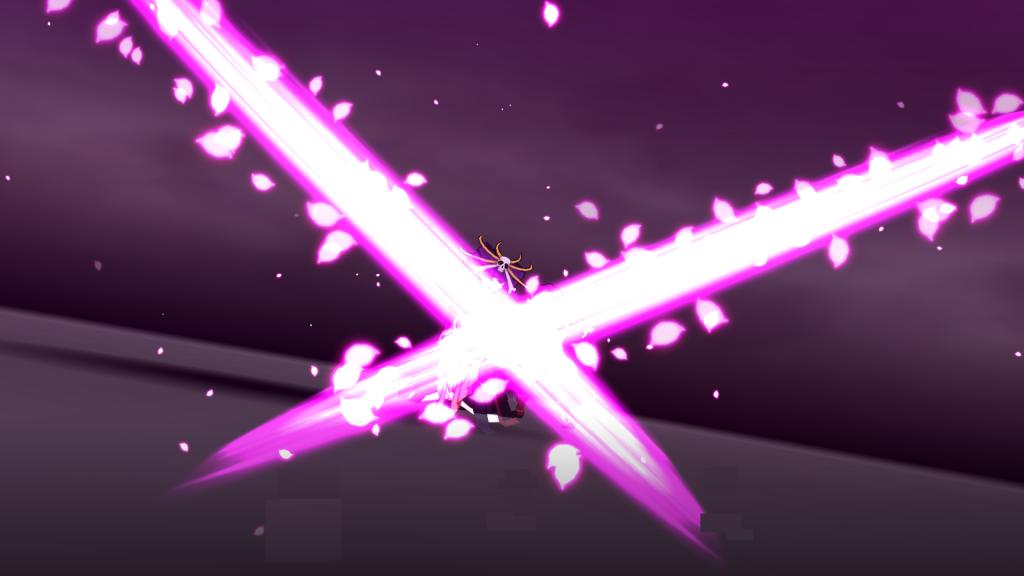 Katen Kyokotu’s special attack is very helpful due to its damage and status affliction. Both spirits attack the enemy dealing heavy damage and also leaving them stunned.

Katen Kyokotsu is great to use against bosses with this special because of her stun effect. So dropping her out first, using her special, then switching out to someone with an even heavier strong attack rate or a better special could easily wipe out a boss. 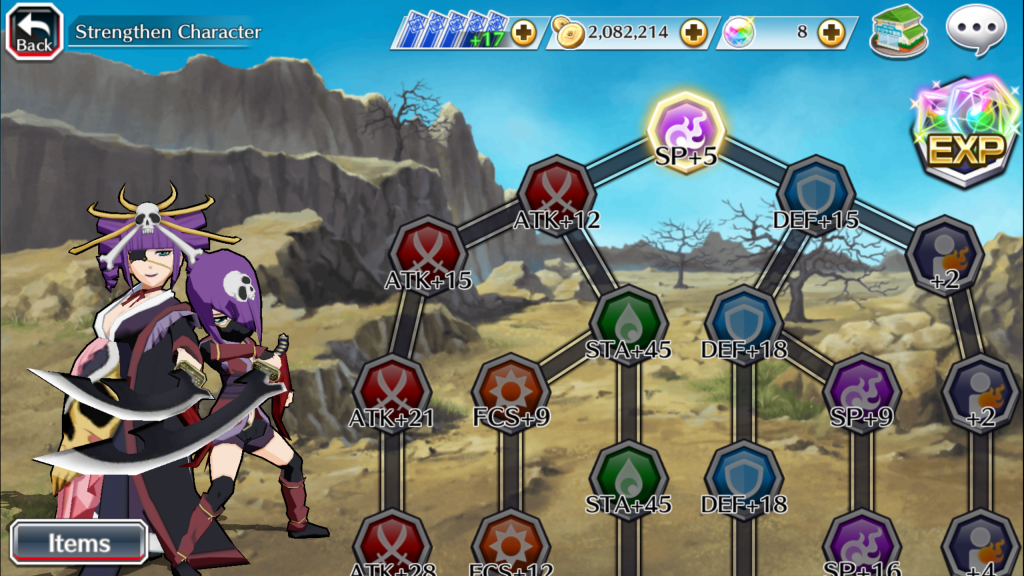 With Katen Kyokotsu being a Focus character with a strong emphasis on attack her best use is going to be on a team that makes her stand out. Placing her with a Kenpachi or Dangai Ichigo isn’t going to be doing her any favors.

If you’re going to use Katen Kyokotsu has your main attacker you want to have your other two characters be ones that can support or tag in with her. Choosing characters with powerful special attacks is a great idea due to Katen Kyokotsu’s stun effect.

A good character to have with Katen Kyokotsu is the Frenzy Power(Red) Orihime. She’s a healer character which will compliment Katen Kyokotsu’s stamina and defense making her harder to bring down.

For a third character I highly suggest one of the Mayuri’s. The Speed(Blue) Tag-Team Zanpakuto Mayuri, or the Mind(Green) Mayuri.

Both have special attacks that deal damage and end up poisoning any enemy hit by it. So mixing Mayuris special to poison and Katen Kyokotsu’s special to stun is a good use of the characters.

So while their poisoned and stunned you can make Katen Kyokotsu’s attack shine by wailing on the boss while it stays there taking constant poison damage on top of attack damage.

Katen Kyokotsu is a very good character all around. She can be used on any team whether she’s the main attacker, back up attacker, or just put in for her special to stun while a stronger attacker is used. 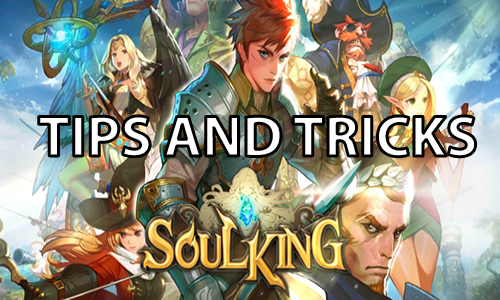