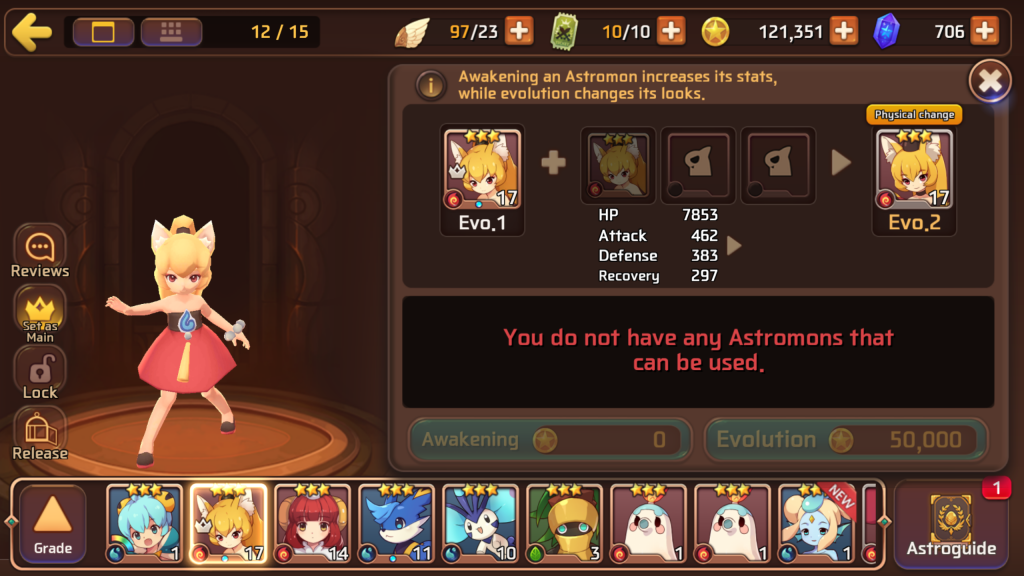 Evolution is a major part of Monster Super League and a very important system to get familiar with. Evolving your Astromons will make them stronger and take the next form they have.

The appeal of evolving your Astromon either comes down to statistics or cosmetics. So whether you want a bunch of strong Astromon or a bunch of cool looking ones, evolution is the key to getting them.

Statistic wise evolving your Astromon is how you make them grow in power. Once an Astromon evolves all of its stats increase.

Evolve it to the third stage and they increase again turning your fully evolved Astromon into a powerful creature. Once they’re fully evolved it’s all up to outfitting them with the right gems to max out their stats.

As for the cosmetic function of evolution it’s rather simple. Monster Super League is full of awesome Astromon. Some are cute, some are cool, and some are just plain weird.

When you evolve an Astromon their appearances will change whether it be very slight or drastically. So if you’re the kind of player who wants a team of awesome looking monsters, evolution is where you want to spend your time.

The next thing you need to know about the Evolution function is the required asset you need to even use it. 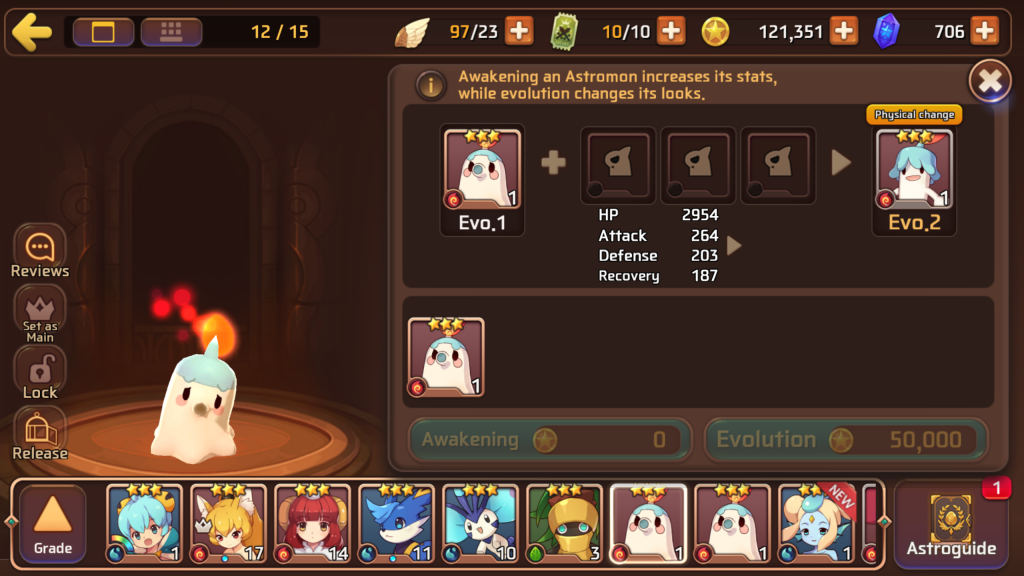 All you need are copies of Astromon you already have. It can be the exact same Astromon you have in your list or one of a different type

On the Evolution screen you’re met with three empty slots. You want to fill those slots with three of the same Astromon in order to reach its next evolution.

This is called Awakening. Each time you awaken your Astromon it gets a little stronger until it fully evolves.

Each awakening is going to cost gold and the prices varies on the level of the Astromon. For some it may only be 10,000 gold to Awaken and 30,000 to Evolve.

For others it maybe 20,000 to Awaken and 50,000 to evolve. So while you’re trying to evolve your Astromon you want to make sure to keep an eye on your gold income. It’s important.

Now the big question here is how to get Astromon. A simple way would just be to buy a multi summon for six hundred Astrogems because it’s ten in a pack and you get a Variant.

But by no means is that the best way of farming them. The best way would be to play story mode and catch several types of the same Astromon. 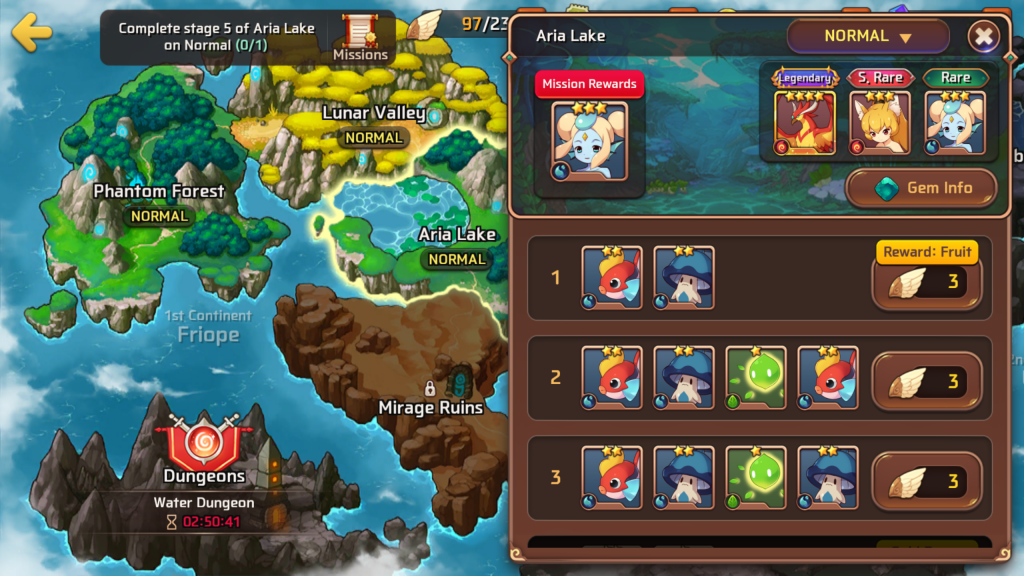 Now this can be extremely easy or extreme difficult depending on what Astromon you’re working with. Let’s use the fire Astromon Miho and the water Astromon Mushi as an example.

Mushi is a rather common Astromon and can be found in most of the levels during the third story area, Aria Lake. All you have to do is catch him like you would any other Astromon.

Once you’ve caught one you want to get three more in order to awaken him fully and then evolve. Once you’ve done that it begins to get a little more difficult. 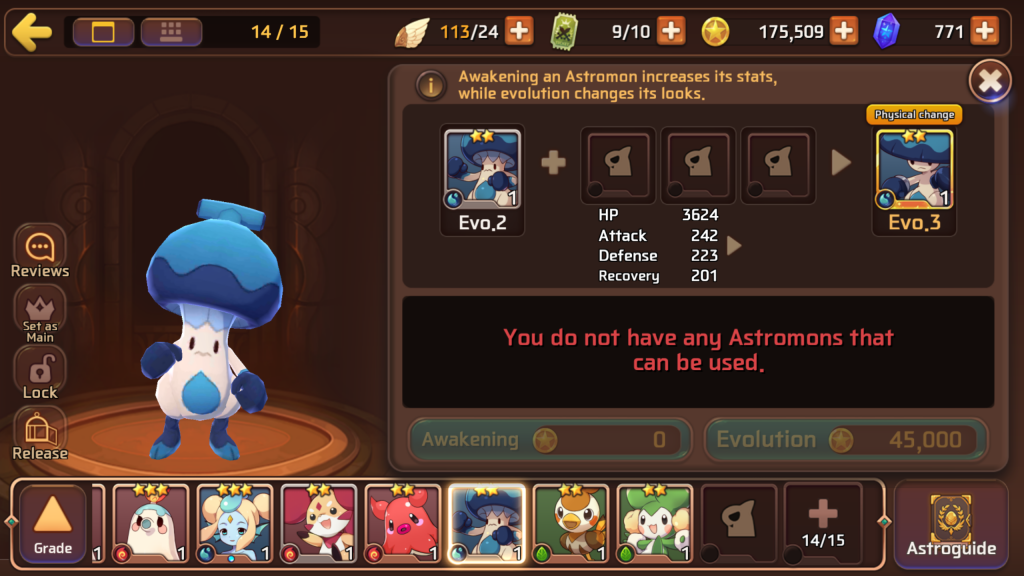 Once you’ve evolved Mushi to the second form you’re obviously going to want to shoot for that third form. But to do that you’ll need three second evolutions to get that third one.

So that means going back and catching more Mushi’s and evolving them again until you have 3 second evolutions. So it can become a little tedious.

But let’s move to Miho now, an S.Rare Astromon. Miho has chances to show up in the first few story areas as a random encounter among other Astromon. 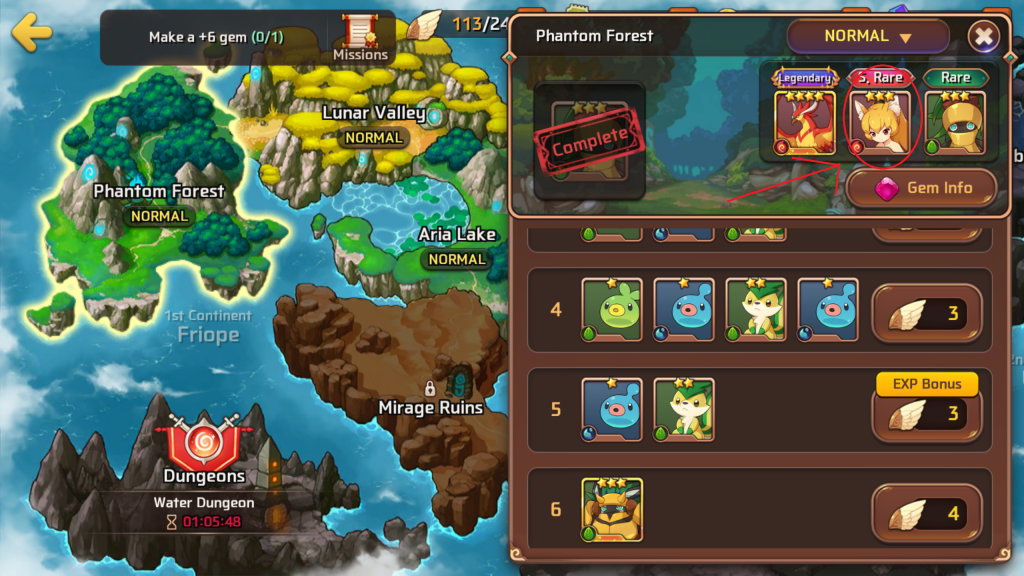 So depending on what Astromon you’re wanting to focus on really depends on which way you think is best for spending your time. Gathering gems to buy multi summons and getting a Variant each time, or farming in story mode to get Variants for your Astromon.

As for details on Variants they are slightly different from normal Astromons. They’re main function is having the Leader Skill ability.

Leader skill basically means having a Variant as the leader of your team gives an extra bonus depending on the skill the Variant has. You can get Variants easily through gem summons and sometimes by evolving your Astromon. 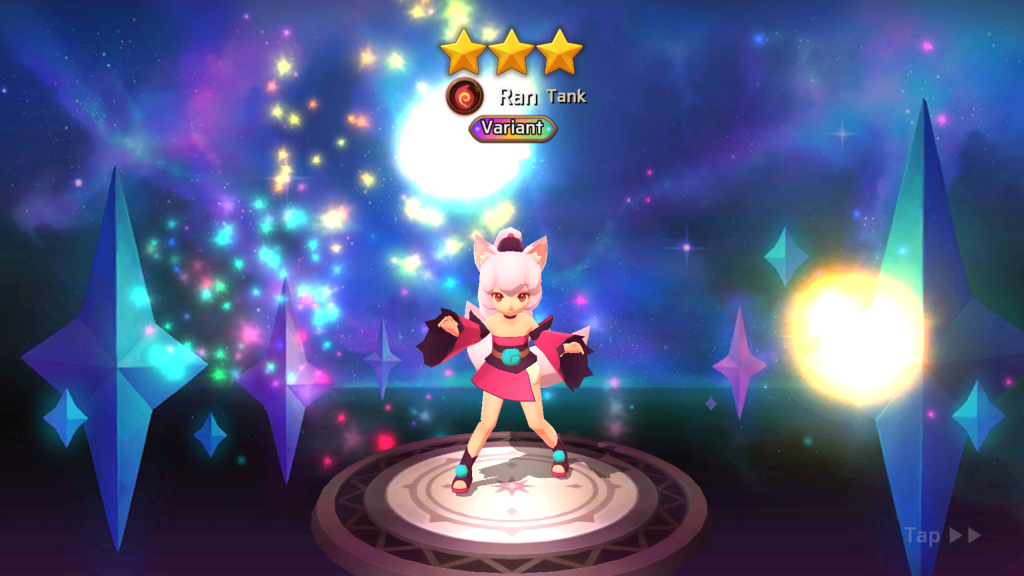 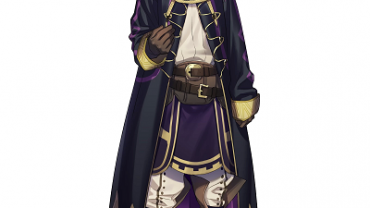