Home
Anime
Top 10 Most Powerful Gundam Mobile Suits of All Time
Hello there, Gundam fan. I have compiled a list of my favorite Gundams here. These are, in my opinon, the most powerful mobile suits I have seen in the Gundam universe. Feel free to add yours in the comment section. Also check out ProfessorOtaku’s Top 10 version if you are curious. 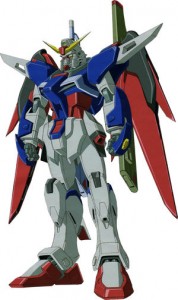 The Destiny Gundam is the main suit of Gundam Seed Destiny and Shin Asuka is its main pilot. It has been designed as a high-performance general purpose mobile suit that is capable of handling various combat situations without needing to exchange equipment during a fight. For fights in close proximity, the suit has been equipped with two beam boomerangs which double up as beam sabers, a large beam sword of which the pilot, Shinn Asuka prefers as his weapon of choice, and a pair of beam cannons.

For long range combat, the suit comes with a beam rifle that is hand-held and long-range beam cannons. For defense, the suit utilizes a small physical shield as well as two beam shield generators. Finally, the suit has been equipped with a standard set of CIWS mounted on its head. 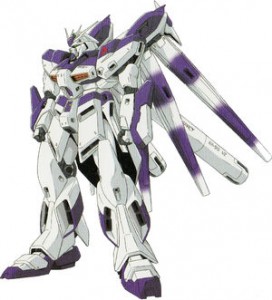 The RX-93-v2 Hi-v Gundam is another interpretation of the RX-93 V Gundam which is seen in Gundam Mobile Suit Beltorchika’s children Amuro Ray is its pilot. It has distinct back boosters and a revised fun funnel system. Its arms include the addition of a powerful machine gun on its right forearm with the inclusion of an extra beam saber making the number of beam sabers up to three.

The suit is also capable of using a hyper mega bazooka launcher when a more heavy firepower is needed. Amuro Ray was able to control the suit more easily thanks to the Psycoframe System, which is a great improvement over the Psycommu system and is prevalent among mobile suits that have been designed to be operated by Newtype pilots. 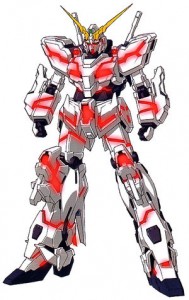 The RX-0 Unicorn Gundam is the main suit of the Gundam unicorn mobile Suit that is piloted by Banagher links. The suit was made as a final part of the E.F.S.F.’s re-organization plan. Its main goal during its development was to destroy any traces of Zeonism in the Earth Sphere and thus, it also incorporates an anti-new type system with its Gundam design.

When the NT-D system is activated the suit goes into destroy mode. To mark this transformation, the suit’s frame expands and the armor seams separate and lock down into several hard points while the newly exposed psycho-frame emits a pinkish glow. 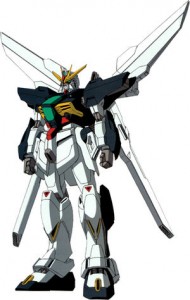 The Double X Gundam is a suit that was created by the newly formed New United Nations Earth and Garrod Ran pilots it. This new Gundam contains the brainwave patterns of Jamil Neate during the 7th space war making it able to utilize satellite canons without a Newtype as its pilot. It has been equipped with two satellite cannons as part of its frame making it able to unleash a very powerful destructive force.

The power of the two satellite cannons was revealed when Garrod Ran used them to destroy the island of Zonder Epta with one shot from the cannons. Its destructive power was also shown again when it was used to destroy the colony laser that was developed by the Space Revolutionary Army. 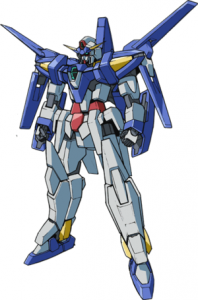 The Age-3 Gundam is among the four Titular mobile suits and the successor to the Gundam Age-2 normal. Kio Asuno pilots this suit. The suit was developed secretly by Flit who used the Age device left by Asemu before he went missing 13 years ago, in preparation for the last battle against the Vagan. The Age-3 Consists of two main components:

The G-Cepter which is a separate unit that is transformable and serves as the arms, legs, body, and armaments of the Age-3 normal making it capable of autonomous flight, and the Core Fighter which serves as the boosters, cockpit, and head. The Age-3 also has newer weapons installed in it. These weapons include; Beam sabers in the mobile suit which were made to be wielded rather than held by hand or deployed directly from the shields of the forearm.

It has also been equipped with a newer weapon referred to as the SigMaxiss Rifle, which is a large hand-held beam cannon that was developed from the Diva-Class Photon Blaster cannon. It has the capabilities to destroy Vagan suits with one shot even those that have electromagnetic armor installed as well as counter beam cannon shots that come from a Vagan MS.