Prepare to travel to a galaxy far far away in LEGO® Star Wars™: The Force Awakens mobile with these tips and tricks that will help you become a Lego master in no time.


Lego games are well known for hiding secret areas, items, mini kits or stud collections throughout the stages either directly in plain site or in tricky puzzle sections that will involve a bit of work.  In some cases they require a specific character even if you do find them. So you need to keep your eyes open ans pay close attention to the background scenery. 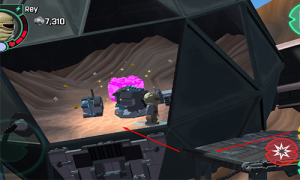 Try getting into any area you can find, sometimes you will get a targeting prompt or visual aid that will tell you something is there but more often than not you will only find something by destroying a structure or building something and making an access path. Other times you just have to go into the area and move behind an object. You can often find a lot of blue studs (worth quite a few points) hidden behind background scenery with this method alone.

Maybe you missed these sweet moves that your Lego Star Wars characters can use. For an example You can tap and hold down the melee button while playing as BB-8 to turn into a spinning ball, that allows you to knock over enemies and eventually kill them or allow Rey to throw her staff like a boomerang at enemies. 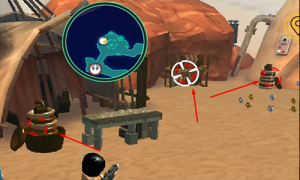 Holding the Wrench or attack icon will bring up a targeting reticle, you can drag this across multiple objects or enemies and have your hero character attack all of them in a queue, which can come in handy with ranged heroes. Double Tapping the up arrows will cause you to do a diving roll or double jump. You will have to try this out on each of the character to find out what their special ability is as they are all quite useful in their own way.

Destroy everything in sight to collect silver, gold and blue lego studs, if you’re trying to get a high score while running through the stages. Most destructible objects are easy to see, but it helps to try and destroy anything you can find on the map.

If you’re near a destructible object it will occasionally get auto targeted by the attack button, or you can try targeting objects to get the reticle on it to see if it can be destroyed. Keep in mind these are on a time limit on the studs made from destroyed items and they can disappear after awhile.

Going to the store menu, then to the Red Brick button, you will find a list of various upgrades. In this section you will find unlockables that you can buy with your studs, that will either do something like regenerate your health over time, change a weapon modifier, give you a lego stud modifier or allow you to use Dark Side powers on a Light side Jedi Lego character. 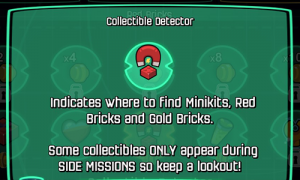 Some of the Obvious ones you will want to go for are Lego stud multiplier, health regeneration, Collectible Detector. Those are my personal favorites along with deflect blaster shots. You’ll have to spend quite a bit of Studs and unlock stuff to get them but it’s worth it.  This is mostly up to player preference and how you want to spend your studs however. 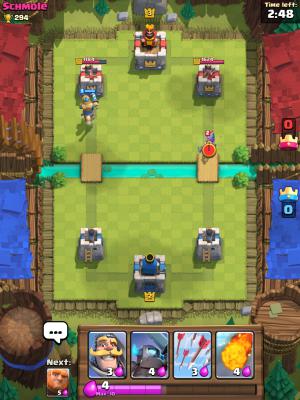