Prishe is a 6-star unit that plays the physical damage and healing role. She is set up well for these two rolls and her skills are rounded just where they need to be.

The first thing to note about Prishe is most of her attacking skills are mostly conditional. If used in specific orders each attack can have a secondary effect on it.

So it’s really important to understand each effect and condition for her attacks so you can utilize her to the fullest. Especially her actual conditional trait Prishe Special.

In her Traits, she has a few boosts that go into the stats she needs and Auto-refresh. She also has a skill for negating damage and 100% resistance to 2 status ailments.

Prishe really is set up nicely in her skills giving her a lot of variety in her attacks but also giving her things like Chakra and Swelling Vitality. Both being recovery skills for HP and or MP.

Her equipment is pretty well too giving her a nice selection of weapons and armor. Her trust master also gives a nice boost to attack, HP and MP.

Verdict: A great physical attacker especially with all the extra conditional effects on her skills.

Prishe is neutral to all elements and status ailments.

Prishe can equip 5 weapons and 6 armor.

A young Elvaan girl from the distant world of Vana’diel. Contrary to her cute looks, she has a hearty personality, and is a proficient martial artist. A free-spirited girl who once led the Tavnazian Safehold’s patrol and would even enter into dungeons alone, for some reason she came to be known as an “abominable child,” and was confined long ago to a cathedral. 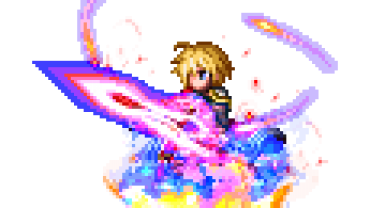