Hello friends! Welcome to my Marvel’s Future Fight character review. Today we’re going to be reviewing one of the newer characters added to the game, Hellstorm. Hellstorm is one of many heroes that were added with the newest Dr.Strange update. So if you don’t have him yet maybe this will give you a reason to work for him. 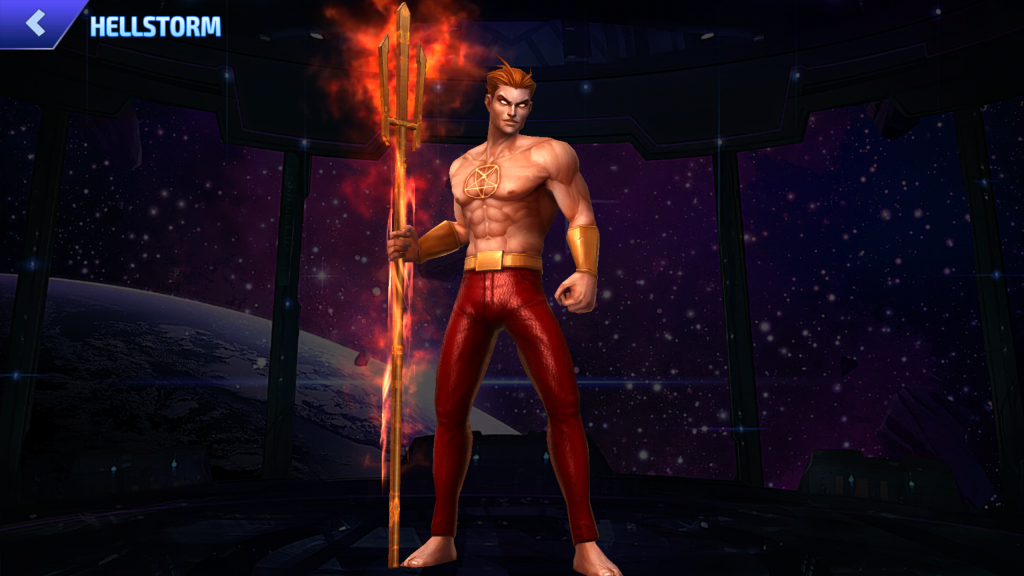 Hellstorm or Daimon Hellstrom, is a marvel character who first appeared in the Ghost Rider comics. Since then he’s appeared along side Dr.Strange and even some of the lesser Avengers during his run.

Hellstorm is a demon and sibling to Satana. Both of which are in the game and gain a team bonus when used together. And both are Universal heroes which offer another bonus for the two. 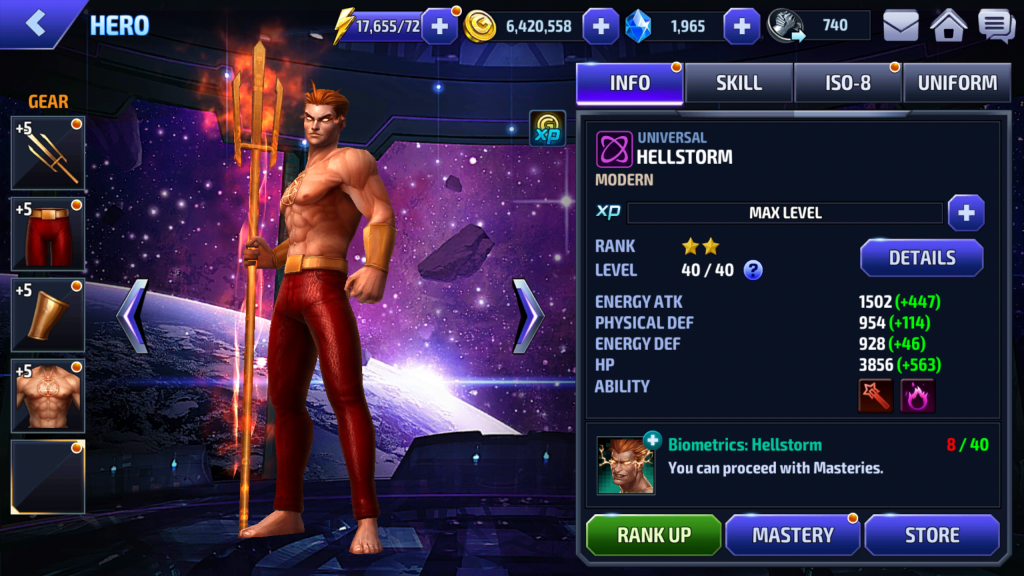 Hellstorm starts off as a well rounded Universal hero. His early game stats are typically what you’d find attached to a Universal but as he grows in level they start to shift a little.

His HP and Energy Attack are where Hellstorms stats shine putting most of the focus into those two traits. Making him a good character to use as a team Leader.

Though having high energy attack Hellstorm is a close range character making him an easy target in groups. So having his high health makes up for the agro he’s going to pull. 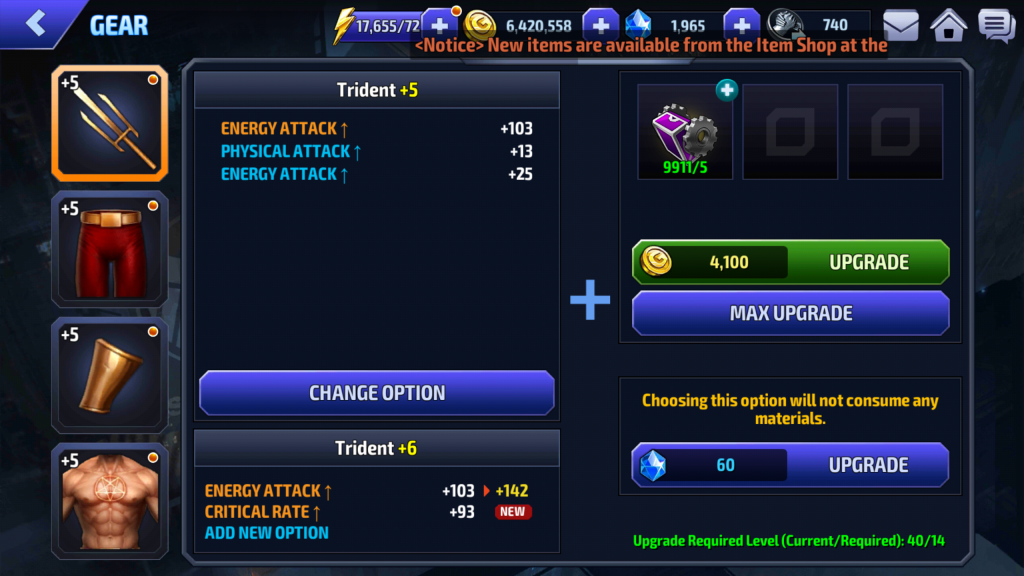 Hellstorm has four different pieces of gear that offer him different stat boosts and bonuses.

The more you level up his gear the higher those bonuses will increase and further boost your stats. Same with increasing his rank and mastery. 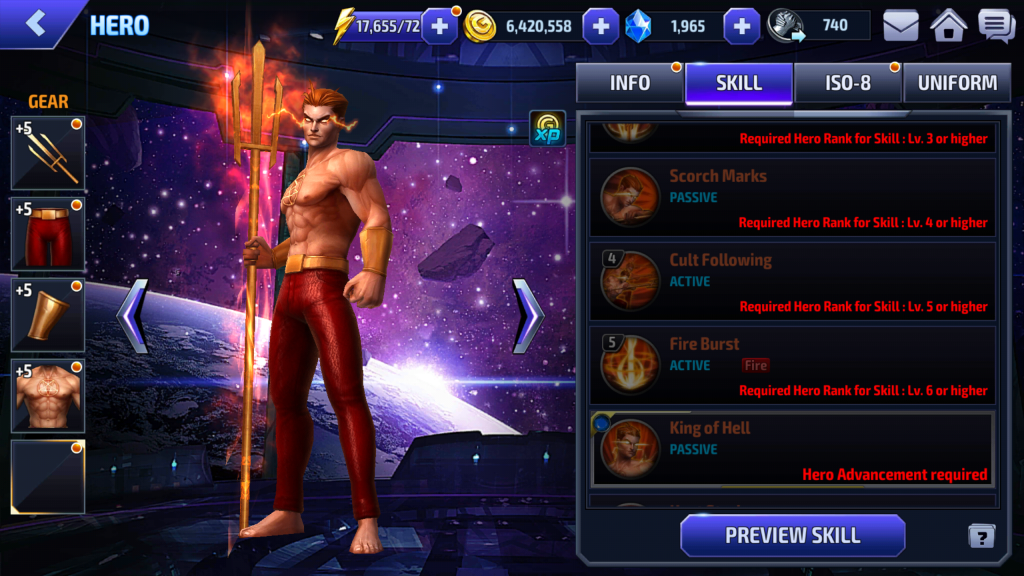 Hellstorm has access to several different attacks and passive skills. These skills unlock the higher rank Hellstorm is brought to.

He has five active skills that can be used in battle, two passives, and one Leadership skill. Each skill can be leveled up by spending gold increasing their effects and attack damage.

Each of these attacks are explained at their base level 1 effects and will increase the higher in level they grow. 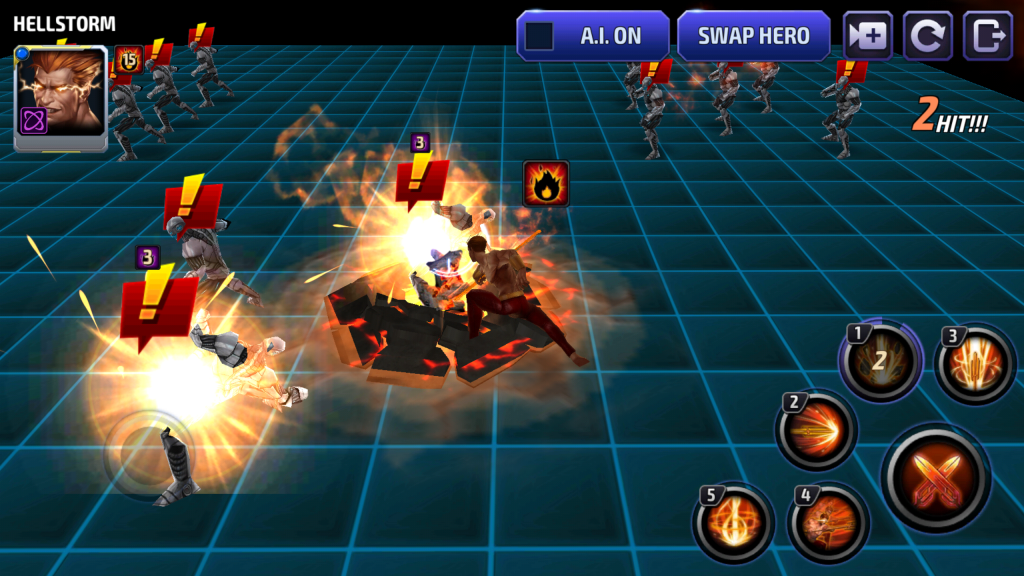 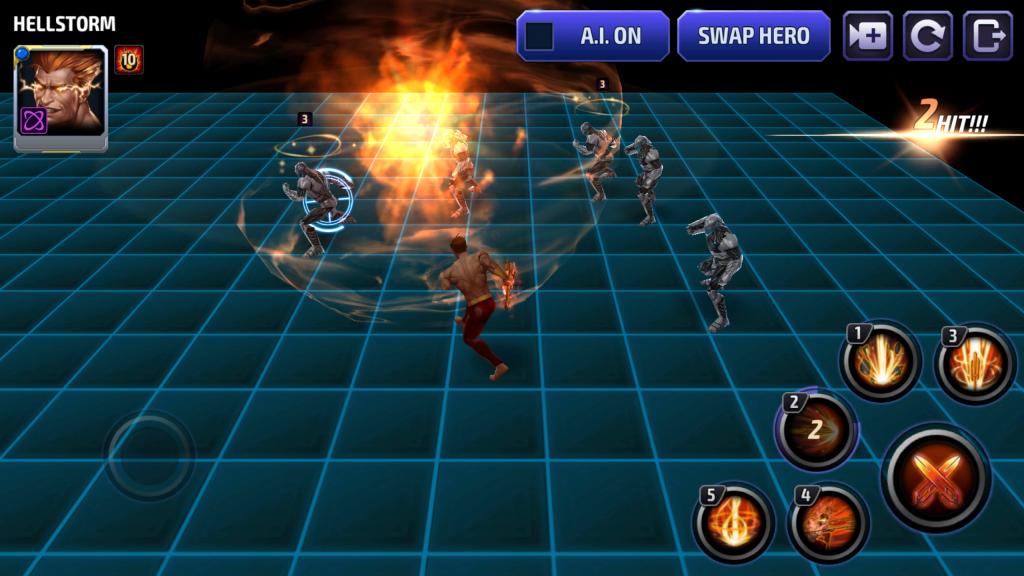 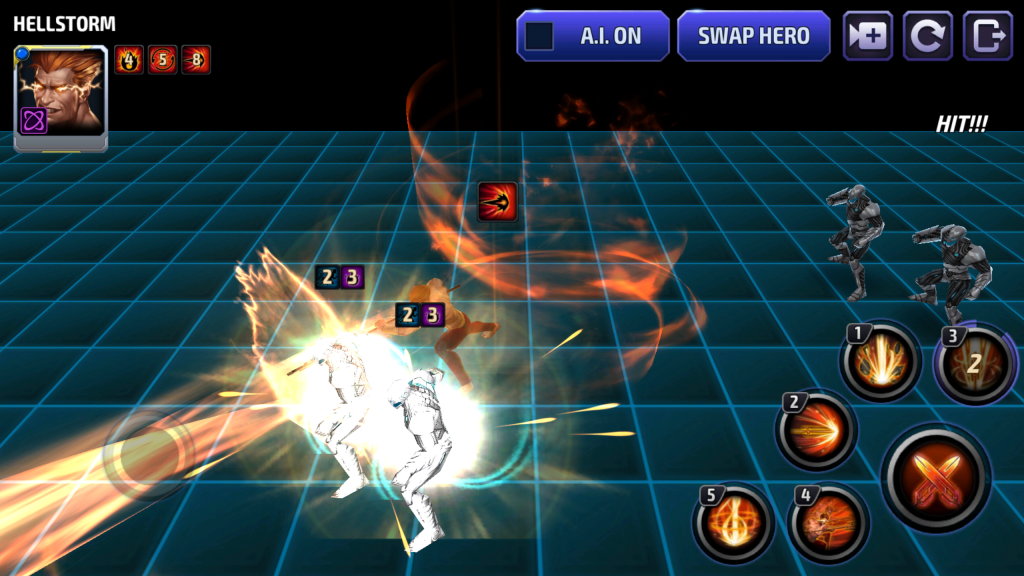 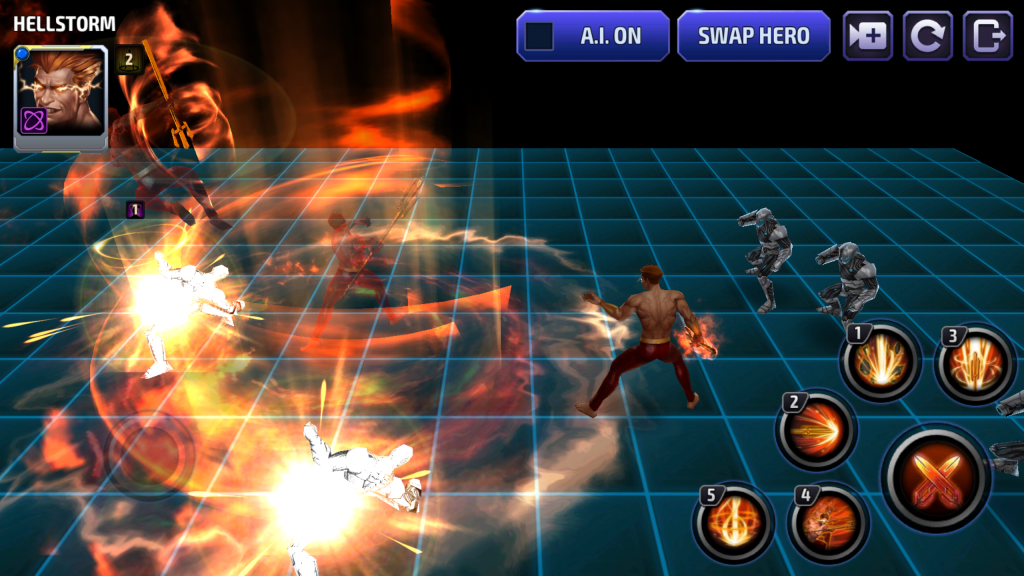 Cult Following – Summon and illusion that has 40% of Hellstorms stats. 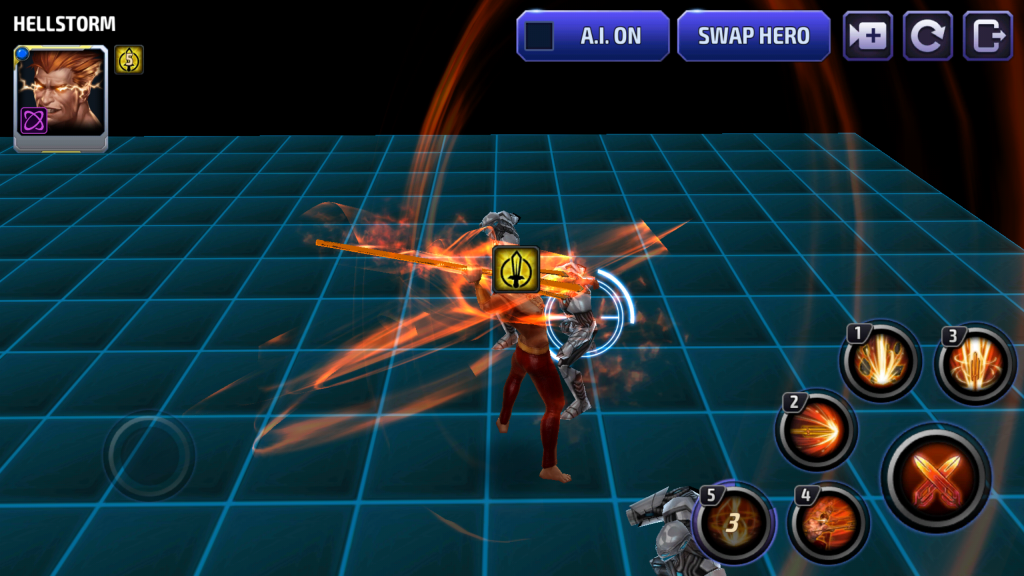 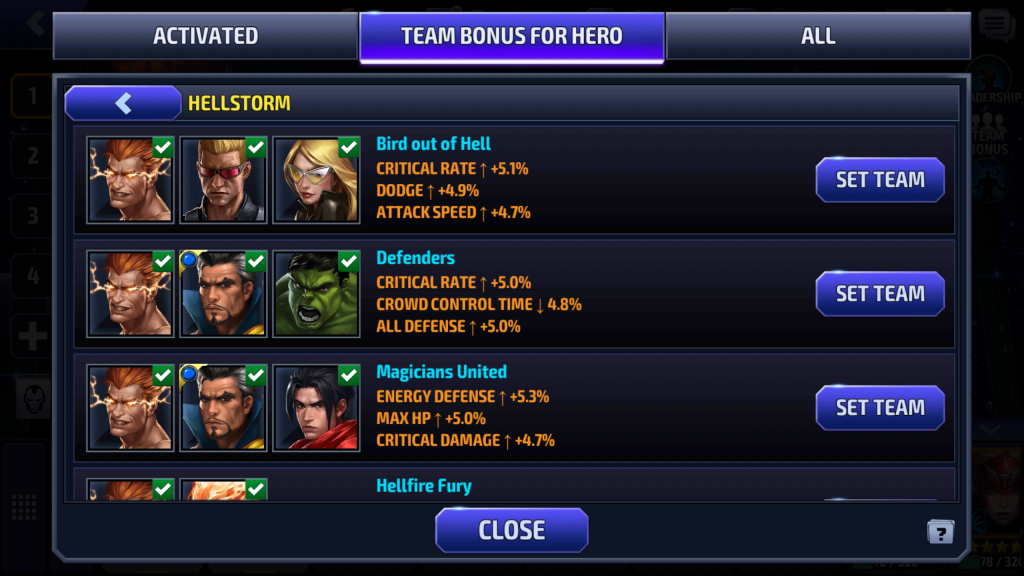 With Hellstorm being a Universal hero it gives him a lot of freedom when it comes to what characters to team him up with. Universal heroes are not strong or weak to any other type so they can be used strategically.

Being an energy based character with close range attacks a good suggestion would be to team him up with any kind of long range character. Whether it be blast character like Songbird or Iron man. Maybe even a combat character like the Punisher.

Balancing your range with your close quarters comes in handy during most situations. But when building a team you also want to focus on the characters bonuses they get when working together.

Hellstorm is part of a few team match ups that give bonuses and all the team setups work perfectly fine.

Placing Hellstorm within any of these team match ups will give a great use of the bonuses and an all around balanced coverage across the board. For the duo team ups my advice is to find a character that balances out the other two of the duo well.

Giving an example with Demonic Siblings. Both Hellstorm and Satana are universal energy heroes so adding Captain Marvel(Ms.Marvel) to the team hurts nothing and adds more power to the fray.

Hellstorm is a good yet somewhat basic character in most respects. His stats are that of an average Universal though his HP makes him great for being energy based in close range.

His skills are what make the most of this character especially with Cult Following. Having his illusion clones to take the heat and crowd control increases his usability by quite a large margin.

Overall I would say Hellstorm is a great addition to any team but is best played as a team member and not leader due to his Leadership skill lacking in quality.

I’d easily give Hellstorm a 7 out of 10 and the score is well deserving. 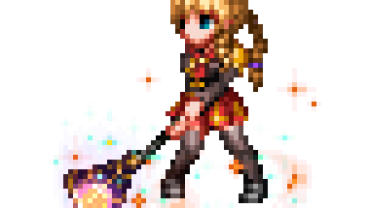