Welcome to the FFRK guide for beginners! I will be sharing with you tips and tricks to help you progress further into the game. 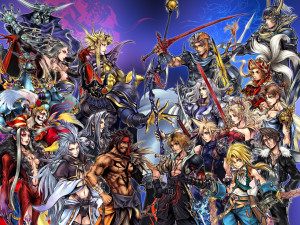 Final Fantasy Record Keeper is a turn-based combat game that features all FF characters. You collect FF characters from various realms and use them in a team to fight the classic enemies you face in each region or realm.

You start off with Tyro and you will acquire new characters quickly. Cloud is a staple member in your party initially until you get your hands on your favorite FF characters in special events. You will notice 5 shards on the top of right of your game. Once you fill out those 5 shards, you will level up. Shards can be gotten from completing Classic and Elite dungeons from any realm.

Do not confuse that with character levels. Each character can go up to level 65 now. Characters also have special abilities called record materia, which gives the character bonus abilities.

Tyro is very versatile and can fit any role from fighter, white/black mage, ranged attacker and more. The downside is that he has poor stats for any given role, which I think is a good trade off. Cloud, Wakka, Josef, Kain and Rydia will be available as you play through the campaign. Rydia will function well as your healer/summoner/black mage until you can find niche roles.  Wakka is a decent support and will be replaced if you can get Tidus.

I personally think Kain is pretty weak and should be replaced by better fighters once you get any from special events.

Do not worry too much about abilities and which ones to hone. I can tell you that the basic ones are:

These will help you for most boss fights and as you progress later on, you will know what else to hone since you need those abilities to master a specific dungeon. 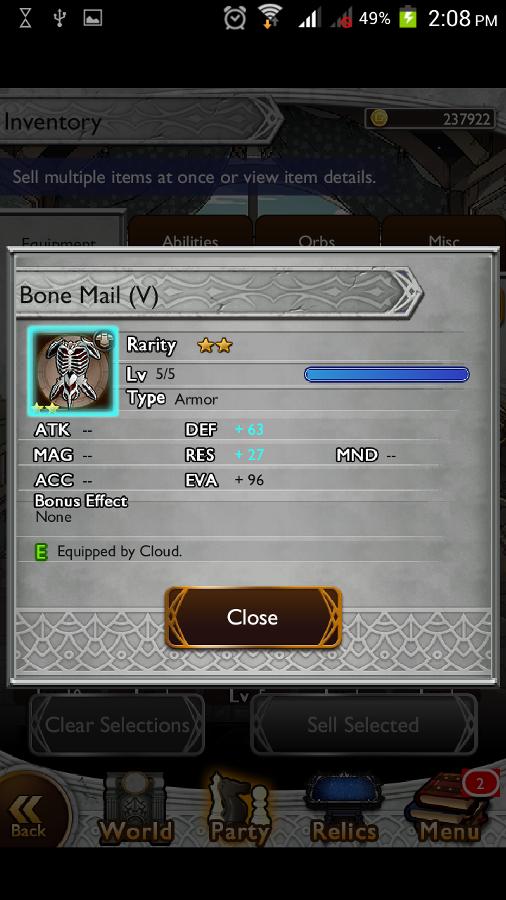 Any character that comes from the same realm as the dungeon will receive a +10 level advantage and 50% bonus experience. So if you take Cloud to an FF7 realm, he will receive those bonuses.

As for item synergy, you will get bonus stats on the item if they are the same realm as the dungeon. If you equip a Balamb Uniform(FF8) item on a character and fight in an FF8 dungeon, your item will get bonus defense stats on it. So, a 2 star weapon or armor can effectively become a 4 star item due to bonus stats. Use this to your advantage. You will want to have armor and weapon for each realm ideally.

Always use your energy till its enough for the next story dungeon to level up since you will gain shards. When you level up, your stamina gets maxed out again. This will prevent you from “wasting” energy.  If you are on 4 shards and 50 stamina, it is not suggested for you to do that 37 stamina dungeon immediately.

Other useful Tips by pintbox:

As you level higher and progress through the game, you will need to do daily dungeons to acquire certain orbs to craft your abilities. While you can get them from story mode, it is a lot easier to stock pile a bunch of orbs of your choice during daily dungeons. Here is the schedule for daily dungeons:

Each daily dungeon has 4 difficulties ranging from easy, normal, hard and elite. The harder dungeons will drop the higher grade items/materials.

A big part of them game will require to farm orbs to craft the strongest abilities in the game. You can check out the orb location drops here on wikia.

For strategy and tips on various bosses and maps, be sure to check out this in depth guide by pintboss. Happy fighting guys and gals!