When you start off Nonstop Knight you have very few basic active skills such as Whirl and Leap but later you will gain things such as Slash, Clone and Void and variations for each of the skills through Runestones. You gain skills as your character levels up but you will only ever have 3 active skills to worry about using. 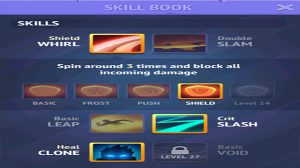 Whirl is a fast animation, making it great for grinding. Leap is good for bosses but Leap with Gold is something you will want to use to farm money when you’re actively playing the game. You will mostly want to use Whirl:frost and Leap:Gold until later levels. Later on you will get Clone, Double Clone and Clone heal. Double clean is great for clearing mobs but Double Heal is the best ability for boss fights.
My recommended skill path once you’ve hit level 17 is Whirl:Shield, Slash: Crit, Clone: heal this setup will easily allow you to fight bosses that are even considered “very hard”. Start with your clone just before you reach the boss, then use crit slash and then Whirl shield. For more difficult fights use whirl whenever its up to mitigate damage. Use crit slash to reposition yourself if there is a fight with ADDs. Always start the fight with clone heal so you can use the cool down in the middle of a boss fight.

2. Which Nonstop Items to keep and which to level first.

While playing Nonstop Knight you will come across various items that include flat attributes such as Damage, Speed, armor, crit chance but there are also items that have On hit or after kill attributes.
For weapons you will likely want to use anything with a high % attack speed and any additional attributes, ideally on hit attributes for a secondary stat or crit chance.

For armor hold onto the items that have +% armor and +% armor with low HP as these items are very handy for hard boss fights. But you also want to keep a 2nd set of armor that has attack speed modifiers for when you go offline.

For your cloak item again, you want to look for the attack speed modifier or armor modifier, these are the most important ones unless you can find something over 20% crit chance rating. 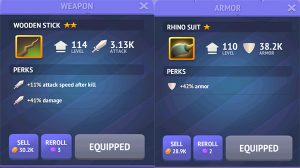 Weapons are your main source of damage in the early stages of the game you can get away with just leveling your weapon stat to clear the stages. So focus on that until the bosses become “Hard” once you reach this point start dumping your money into armor upgrades. Armor is the primary stat required to clear bosses. It doesn’t matter too much for stages but when it comes to surviving a boss fight it is very important. Your cloak amplifies your abilities, its not very important so only spend money on it when you can. 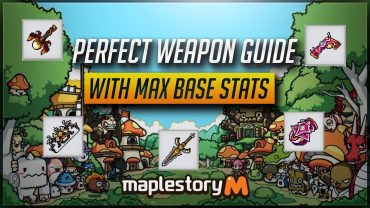