Hello everyone! And welcome to the Plants Vs. Zombies Tips and Tricks Guide. This is a guide designed to help some of you with a few little pointers to the game. Throwing out some basic knowledge and giving a few little tricks that’ll make the game a little easier for you. So whether your a plant or a zombie hopefully something in this guide will be for you. 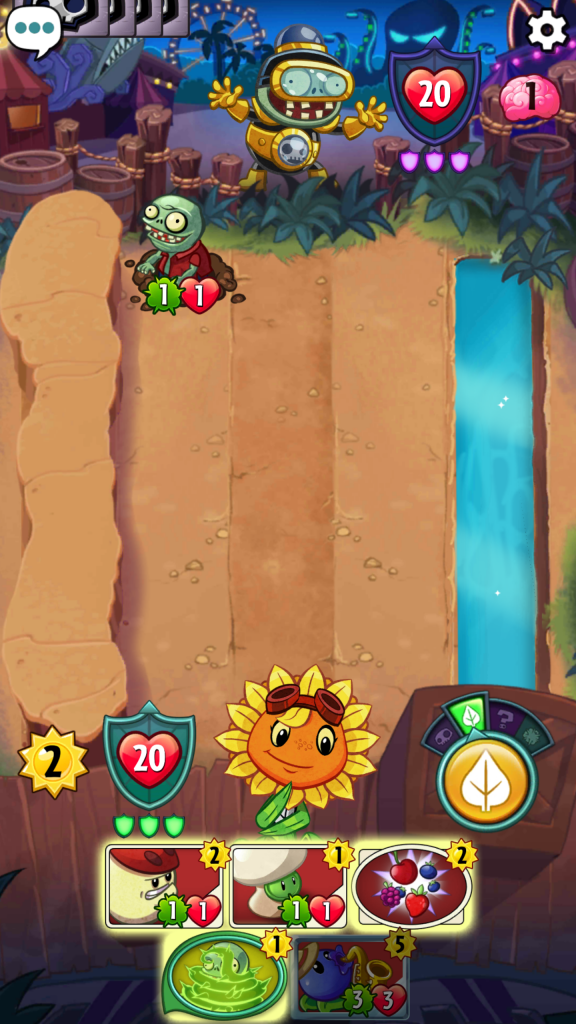 Plant’s Vs Zombies Heroes is a card based strategy game that has some tower defense mechanics. You and your opponent have a hero that acts as your main character.

The point of the game is to deplete the hit points of your opponents hero before he does it to yours. To do so you both play a wide selection of cards to attack the other.

Plants Vs Zombies – Playing the Lanes 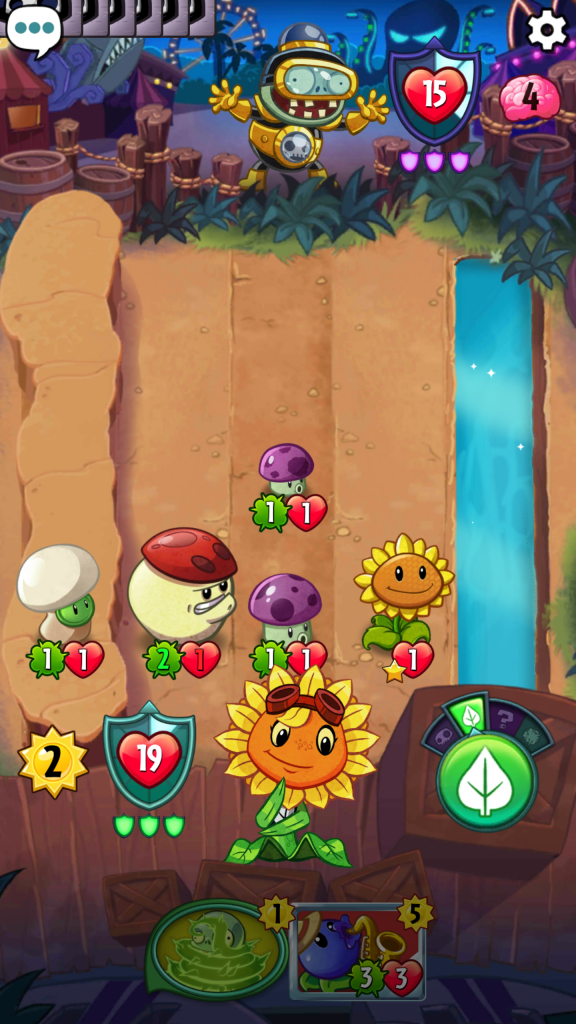 When playing Plants Vs Zombies most of the time you’re going to be playing a trade off with your opponent. He plays something, then you do, they attack and take each other out. Then you rinse and repeat the process.

You always want to keep your hero protected so you’re going to lay down a card in the same lane he did. But its not always the only move you can make.

When your opponent plays down a card check what its life and attack is first. If its anything above 3 on either one, play something down in the same lane to counter.

But if it’s a 1 or 2 on life or attack I suggest a different tactic. If they play a lower attack or life rank and you have something higher play that but in an open lane.

During the attack phase you’re both going to take damage but your opponent will take more than you do.  But say you don’t have any high attack cards only low ones. It works the same way to.

The goal is to lower the other heroes hit points that doesn’t mean you have to keep all of yours so taking some hits isn’t gonna be to bad as long as you pay attention.

So lets talk about when you’re out numbered. Your opponent has three lanes full and you’ve only got weaker cards that’ll his will plow through.

So what do you do to keep from throwing away your cards?  Pile up the lanes before you get out numbered.

Aside from playing in open lanes another good play on defense and offense is to stack in the same lane. So right from the start pick a lane and start piling cards onto it.

Once you have two in one lane pick a second lane and and keep adding to those two through out the match. Your opponent is going to place his cards in open lanes to get free hits but he’s also going to try and block the stacked lanes.

And when he does it becomes easy for you. His one card won’t be able to stand up to your two or three stacked. So he attacks one and takes it out.

The one he destroys is gonna damage him, then the one behind that one will take the next attack onto the minion or your opponents hero. So the term a good offense is the best defense does apply when playing Plants Vs Zombies.

But there’s also something else that can make your deck a real power house and completely destroy your opponent. 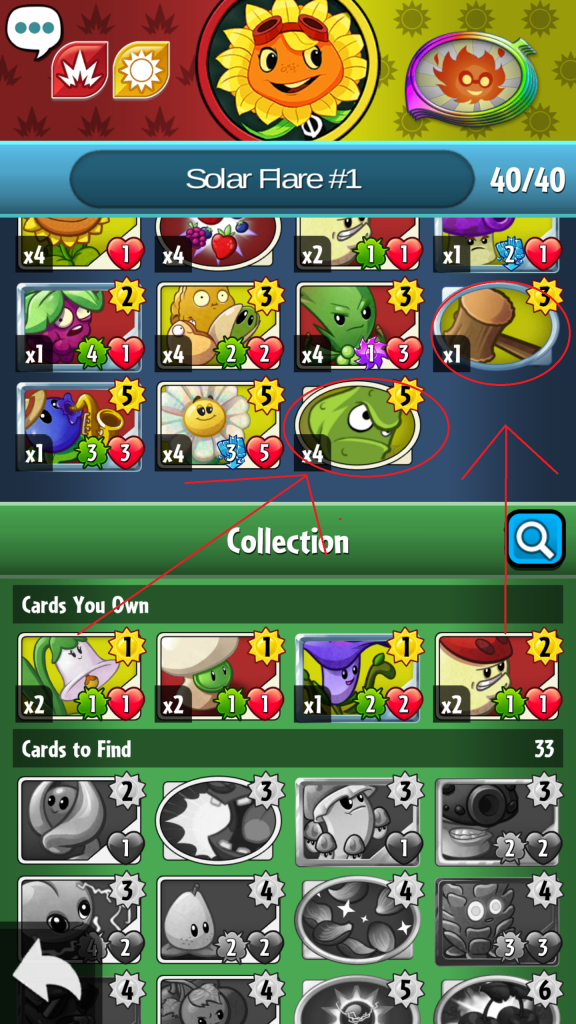 Now there is one kind of support card that is amazing to have in any deck you make and can completely change the tide in a match.

These are destroy cards. Things like Squash or Whack-A-Zombie are great cards to have in your deck and give you big openings on your opponent.

So when you’re out numbered and have open lanes. Stack your deck with a good number of support cards that destroy out right.

You’ll clear the lanes and give yourself new openings and chances to attack the other hero. But you have to plan your deck out carefully.

Support cards usually take a lot of points to use in a match. Most ranging from 3 to 5 points so you wont be able to play them one after another.

So build your deck to where your able to fill up your lanes with a good defense, then play the destroy cards to keep the lanes open.

Plants Vs. Zombies – Getting cards 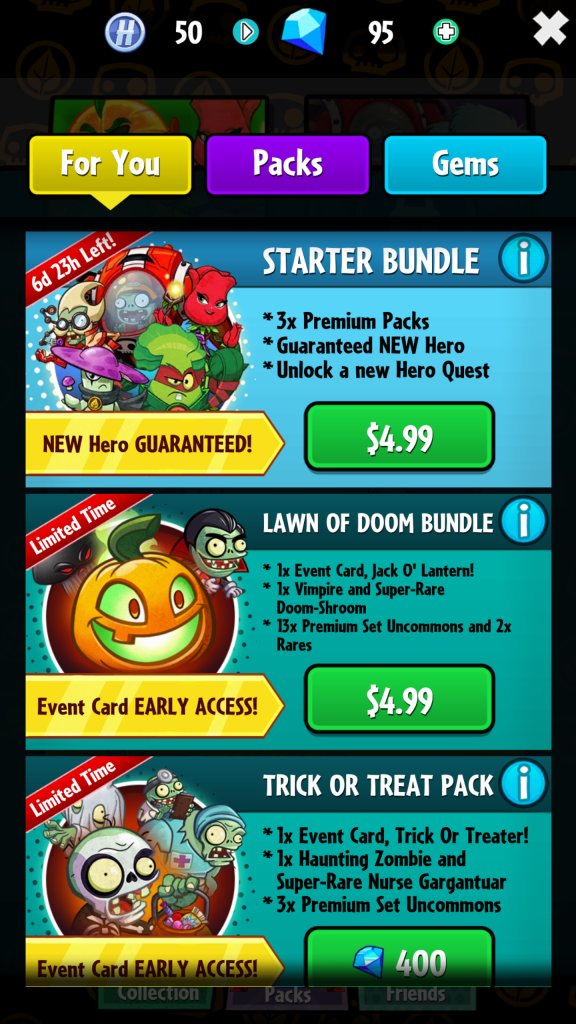 Something very small but very helpful you want to do is get as many cards as you can. The more you get the more ways you’ll have to build your deck how you want and play better during a match.

When you start you’re given a set amount of cards at default but you get more through out the game. But the best thing to utilize is your packs.

First pack you get is given through tutorial once you’ve played the first few Plant mission. You get 100 gems then use them on a pack with predetermined cards. Aside from that there are free packs you can utilize.

Every player gets two free packs that cost zero gems. And in each pack is a nice number of cards that give you a good fill in your collection.

Each pack gives you uncommon, Rares, and Super Rares. What you get is completely random but it’ll be better than just having all the default cards you start with.

Plants Vs. Zombies Heroes is a game mostly based around strategy. To win you have to think about your move and out play your opponent before he out plays you.

So the best tip you’re gonna get is use your head and pay close attention. I hope this guide was helpful to some of you.

Remember keep your defenses up and your lanes open. 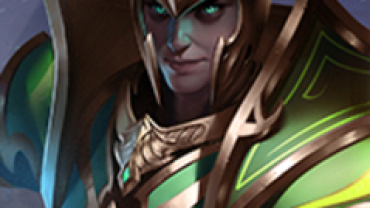