Hello everyone and welcome to the Star Wars Force Arena guide. This guide is designed to help understand the mechanics of the game and give some tips on strategy for playing. 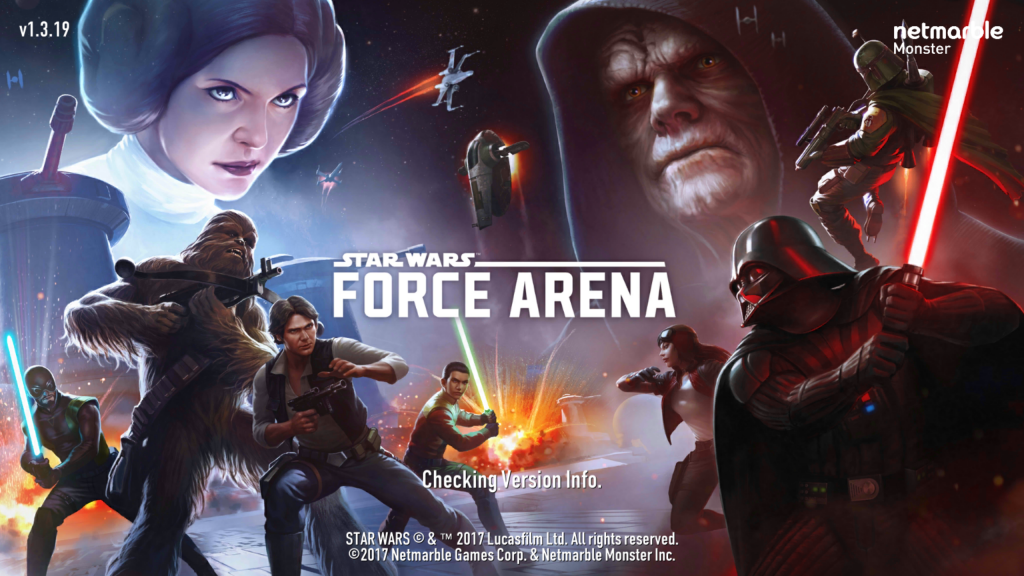 Star Wars Force Arena is a top down strategy game based in the Star Wars universe. In the game you take control of either the Rebels or the Empire and you wage all out war against the other side.

You’re given a leader who is typically a well known name from the franchise. Anywhere from Luke Skywalker and Princess Leia to Darth Vader and the Grand Inquisitor.

With your leader you are given a deck of cards that you use to send out troops onto the field. And with your troops you fight across the field to destroy the other players turrets and shield generator.

The game itself is simple and can be easily picked up and played by anyone. But there are definite counts of strategy to be applied to the game to make it more complex.

Troops and the Battlefield 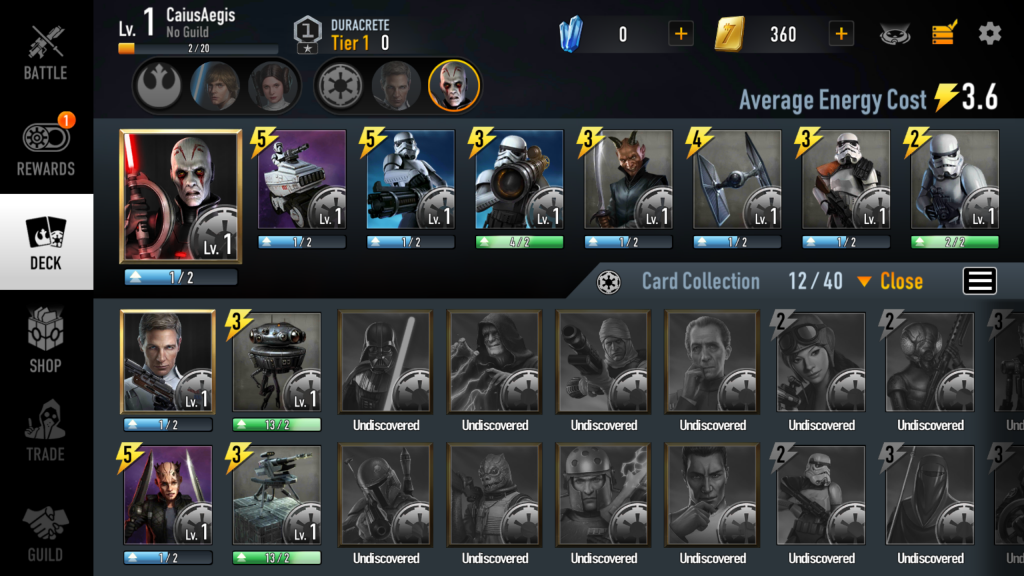 At the start of the game you’re introduced with a tutorial that explains the main basics of the game. Once the tutorial is finished you’re able to move freely through out the game.

The first thing you want to do is collect all the free packs your given then check your decks. Pick the cards you feel fit your play style but don’t overload your deck with expensive ones.

To play cards it costs energy and energy reloads over time during a match. So having a bunch of high level cards is going to make it hard to get your forces out.

The best course of action is to pick a few well versed high energy cards maybe one or two then fill the rest of your deck with unit cards. Ranged are good but go down easier while melee units are more durable but do less damage. 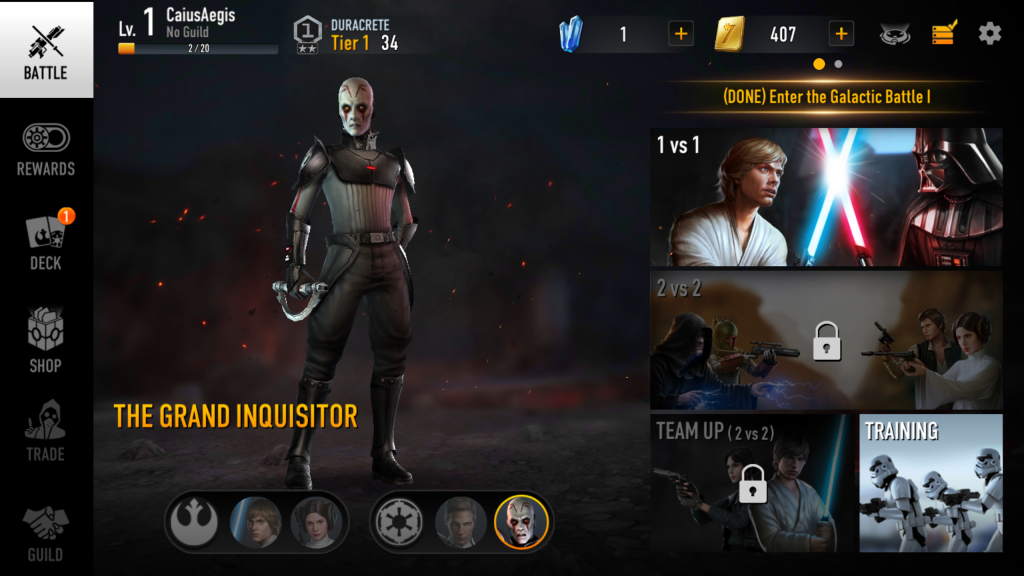 Once you have your deck built you’re ready to head out to the battlefield. Pick your side and prepare for battle.

There are a few different game modes in the game you can play as. There are the 1 vs 1 mode, 2 vs 2, and team up mode.

The mode you’ll spend most time in is the 1 vs 1 mode so we’re going to focus on that for now. At the start of the battle you have nothing but your leader on the field 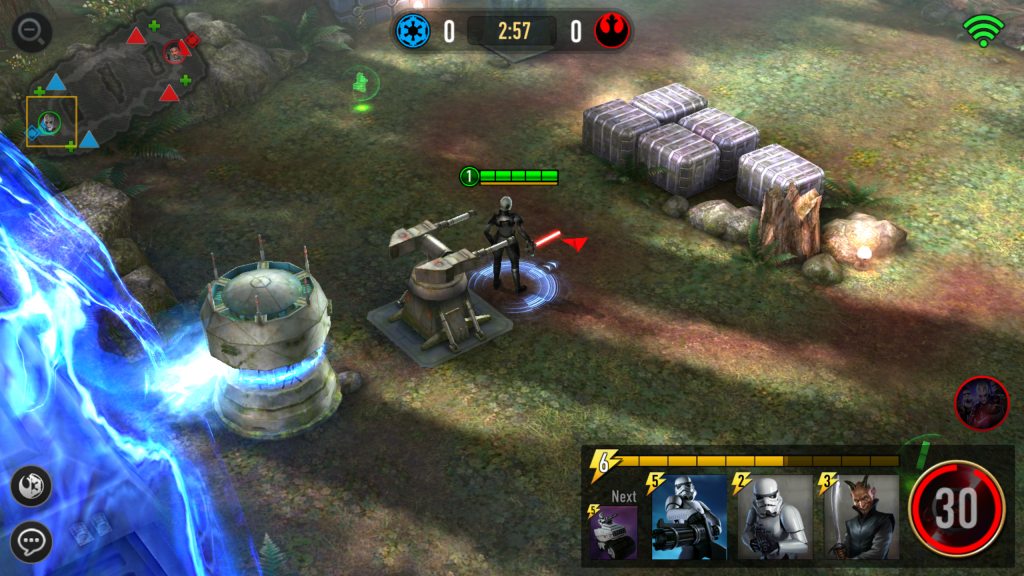 You want to start moving towards the enemy turret and laying down troops as you do. You can only bring in troops outside of a turret area so you want to have some at your back before you’re up close to it.

Once you’re at the turret chances are your opponent’s leader will already be there to meet you. You want to focus your attack on their leader until they go down.

If you have enough troops at your back then taking down the other leader should be no problem. But once they go down it can immediately get dangerous. If you take out the leader and you’re good on health and troops then its a good idea to take out the first turret. If your enemies leader took out most of your immediate troops and left you hurting you may want to fall back until your energy recharges just to be safe.

A good idea is to utilize ship cards you have as best you can. Calling down a TIE Fighter or an X-Wing does some decent damage to whatever is in their path.

Once you’ve taken out the first turret things get a little more tense heading for the second. Your enemies leader and troops are going to respawn much closer and more frequent so you’ll have to pick you openings carefully. Yes you will be attacked by the turret itself while taking enemy aggro but you also have a great chance for distraction. Bringing in as many troops as you can keeps your enemy swamped and lets you go up to take out the turret yourself while they’re dealing with your troops. Once the second turret is destroyed the match is pretty much one. All you need to do is charge everything you have at the shield generator and you should be able to take it out no problem.

A big factor in Star Wars Force Arena is knowing what cards work best together and knowing exactly how to use them in the field. Building up your troop and managing your energy is the real strategy for the game.

Never let yourself be with out energy but also never be with out at least one troop on the field. That’s the key way of winning any battle.

I hope this guide was helpful and that you all enjoy battling each other through out the galaxy.