Hello everyone, and welcome to the Yu-Gi-Oh! Duel links Tips and Tricks guide. Yu-Gi-Oh! Duel Links is a new duel simulator game on the android and ios that is very similar to the TCG that’s been out for years. If you’re a fan of the Duel Monsters card game then you will thoroughly enjoy this game. Also, check out this awesome new site with card packs and deck builders! 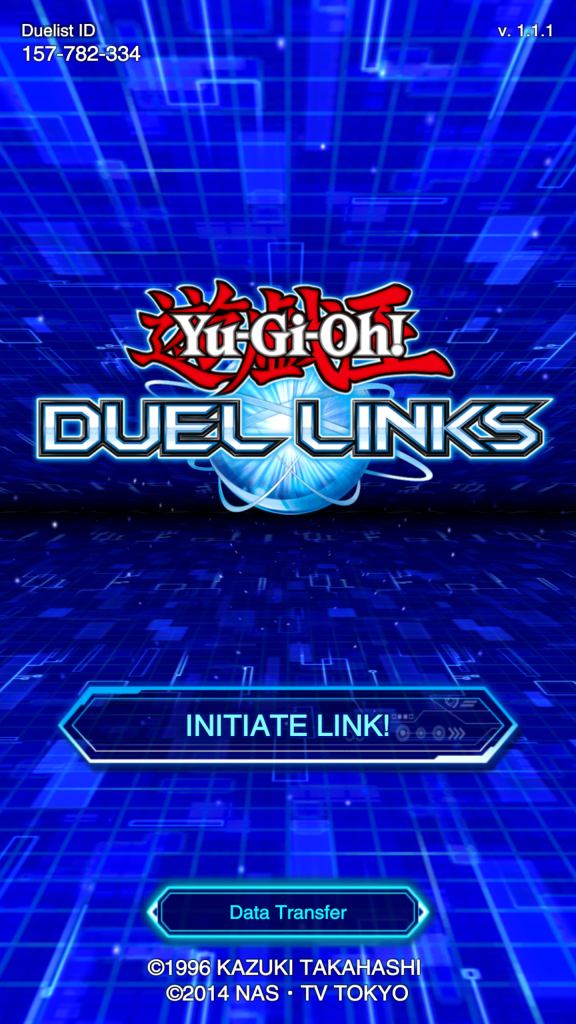 Yu-Gi-Oh! Duel Links is a game based off of the Yu-Gi-Oh! TCG that has been around for many years. It pulls heavily from the existing card game but changes the rules slightly to fit the games format.

In the game you can construct a deck of 40 cards and your goal is to summon monsters to defeat your opponent. You each have 4000 life points and your monsters that attack lower your life points with every attack.

Each monster has their own attack value anywhere from 100 and onward. Your goal for the game is to summon strong monster to destroy your opponents monsters but to do that you have to get rid of some weaklings first. 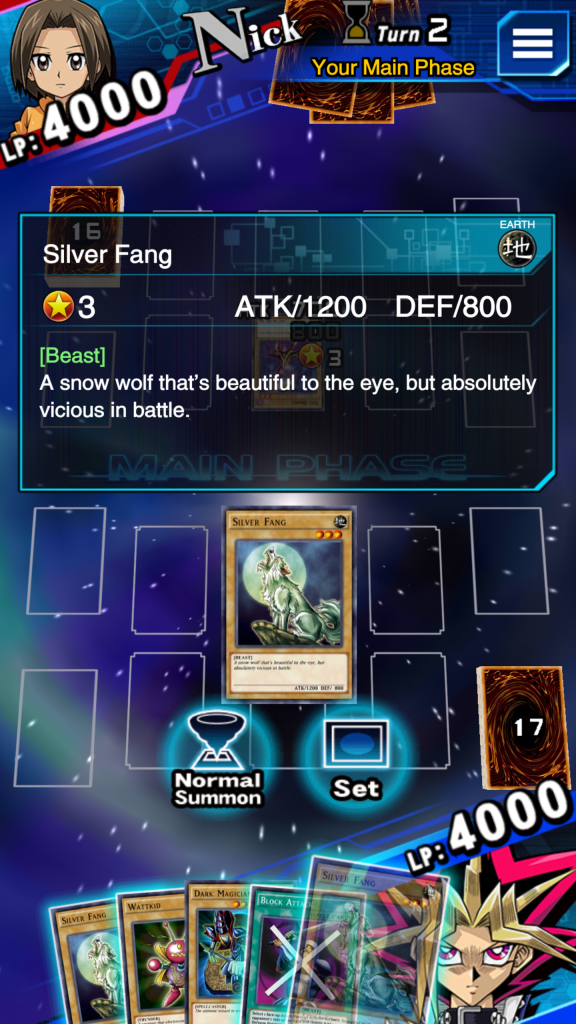 All monsters have star levels that determine their summon cost. 4 star and below can be summoned freely with no cost at all, where as 5 and 6 stars require 1 monster tribute while 7 and above need a 2 monster tribute.

On top summoning your monsters you’ll need a good arsenal of Spell and Trap cards. These cards are the support of the game that can help you turn the tide if you’re in a bad way.

Magic cards can typically be used when ever and have helpful effects like increasing your monsters ATK points or letting you draw another card. Trap cards can only be used after the first turn you set them and their effects vary, some traps destroying your opponents monsters while others let you raise or lower a monsters ATK or DEF points entirely.

The rules of the game are very simple. Each player summons one monster per turn and attacks until the other player runs out of Life Points. Once they run out you win the duel and you’re awarded for the victory.

Now this being a card game the biggest aspect is naturally, the Cards. To get cards you have to buy packs and to get packs you need gems. And funny enough gems are not hard to come by in this game. 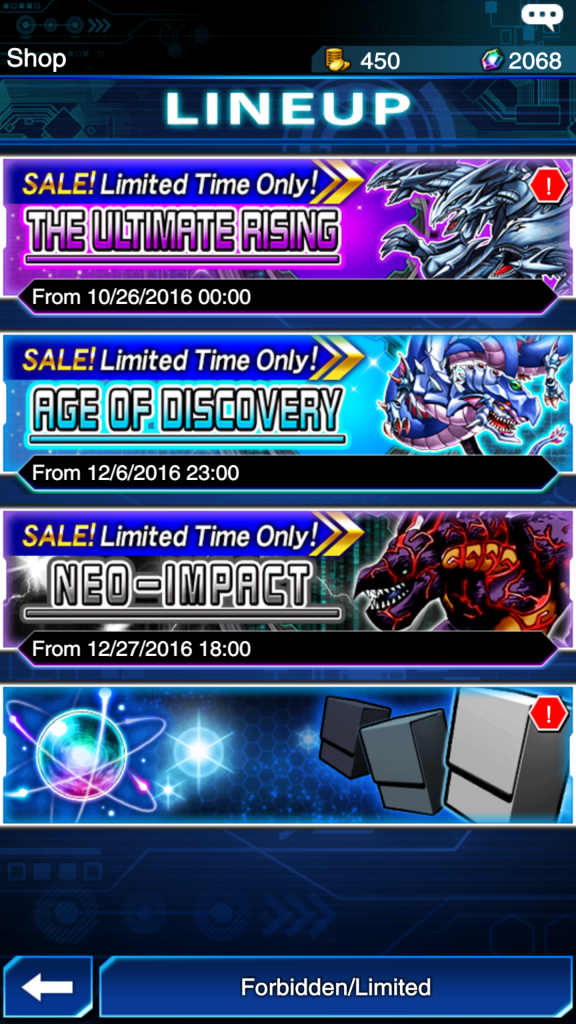 In the card shop you are able to select from 3 different packs of cards. Each pack has a different theme that fits with the cards that are within the packs themselves.

All packs are the same price and have two different forms of purchase. For 1 pack you pay 50 gems and for 10 packs you pay 500 gems.

Each pack contains 3 cards typically 1 monsters, 1 spell, 1 trap. But sometimes the formula is different not always giving those exact types of cards all at once.

Most people will usually save their gems and pay for the 10 pack pull and that’s perfectly fine. But you have to know how to get gems first.

The first thing you’ll notice is just by starting the game you are given a large chunk of gems. So you have plenty to start off with to help build your deck. 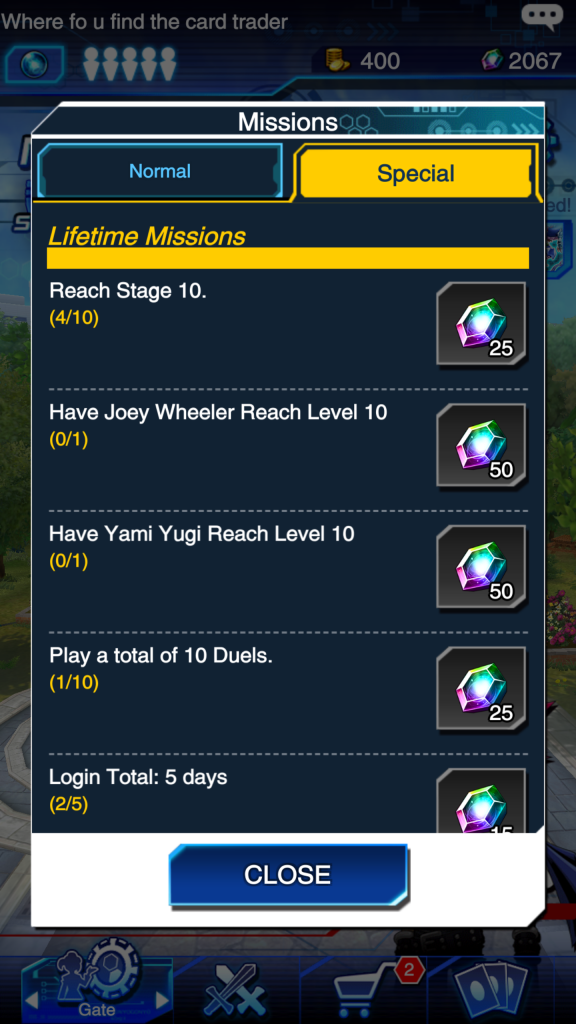 A good way to get gems is by completing missions. Most missions give basic rewards like Gate Keys but a lot of them give small chunks of gems and they add up very quickly.

Another way to get gems is simply by dueling. As your duel level increases you can obtain gems as level up rewards.

Or if you plan to invest time into the game you could always buy gems with money. They aren’t to pricey and sometimes give good deals on the price to gem ratio so its always a good idea to check.

Once you’ve got your gems and buy a couple packs its time to start deck building. Most people will just throw the strongest monsters into their deck and expect to win but there is strategy involved when it comes to building a good deck. 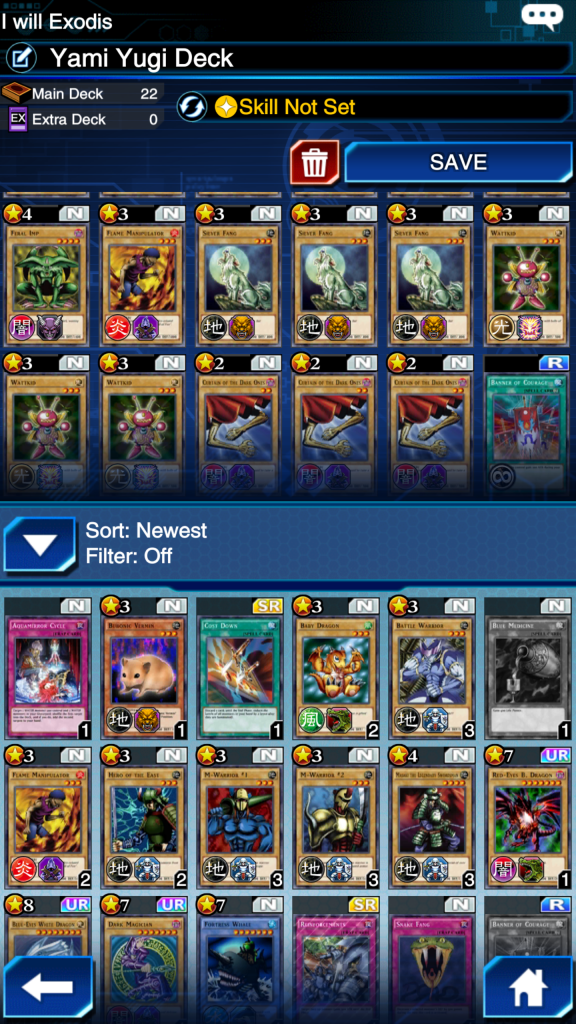 The first step to building a good deck is knowing what kind of cards you want to be in it. You need to have a good balance of Monsters, Spells, and Traps.

Having a deck of nothing but monsters will give you a huge disadvantage against someone whose balanced. Spells and Traps help support your monsters making them more powerful and effective.

You don’t want to overload your deck with super strong monsters other wise you’ll never be able to get anything on the field and you’ll suffer direct attacks from your opponent. 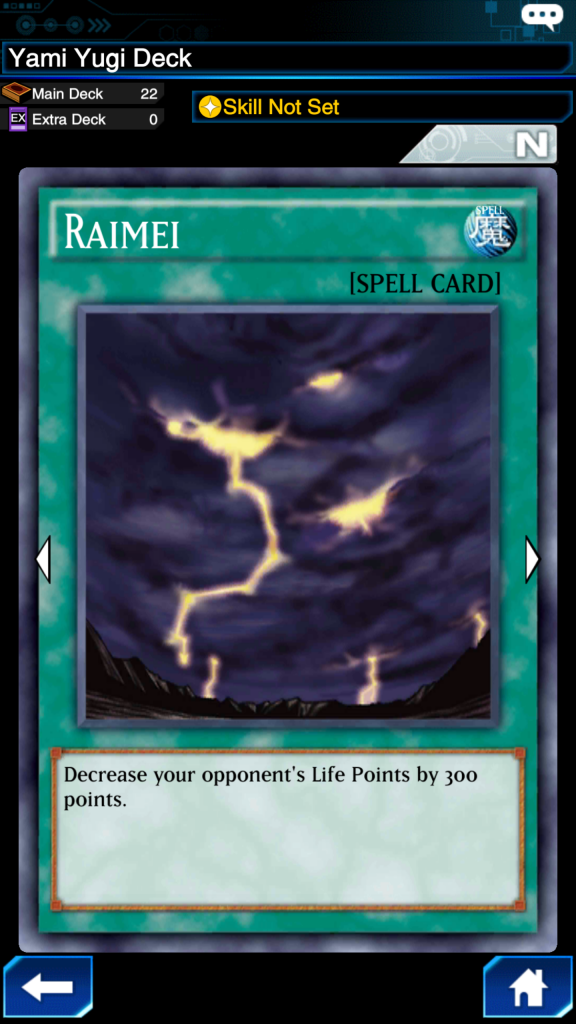 Once you know what kind of monster cards you’re going to have, which typically goes by what type of card you’re most interested into (Spellcaster, Warrior, etc.) you’re going to have to carefully pick what Spells and Traps work best for your monsters.

There are also spell cards that can lower the cost of a monster to summon it you just have to pick what fits your monster best. As for traps there are really two major things you watch for, whether you want to be defensive and safe or aggressively offense. 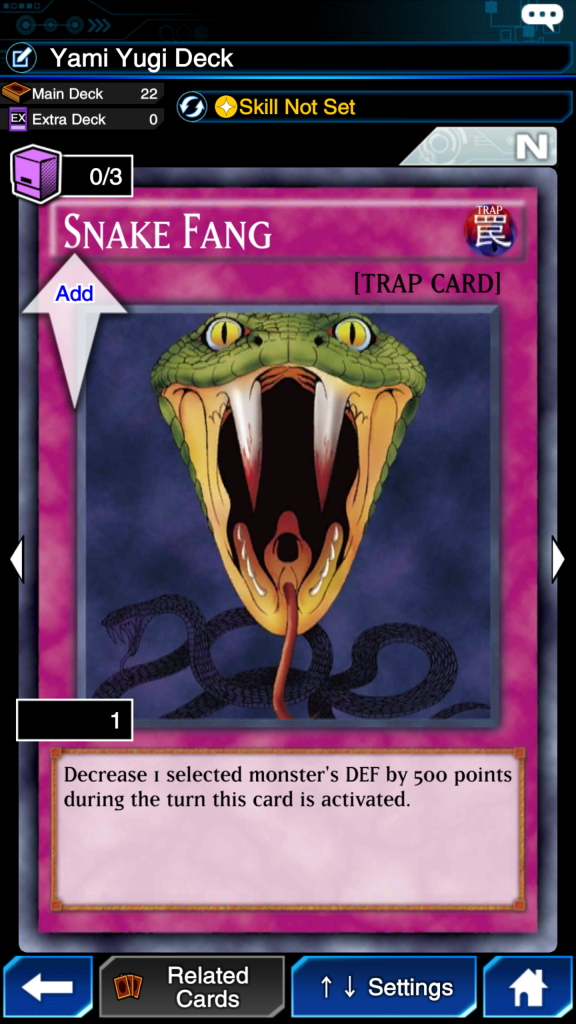 While the more defensive traps are built to protect you in order to build up your defense. Some traps like Skull Dice is used to lower your opponents monsters ATK when they attack.

Some other defensive traps are good use to summon monsters from places you normally wouldn’t be able to. Like Call of the Haunted allows you to special summon a monster that’s been destroyed and sent to your graveyard.

So combining cards like the spell card Card Destruction to discard both players hands then playing Call of the Haunted can allow you to special summon a high powered monster you had in your hand with out needing two monsters to tribute for it.

So when it comes to building a deck it’s all about strategy and play style. Do you want something aggressive that’s designed to field wipe your opponent and keep control?

Or something more defensive that’s designed to build up your field with powerful monsters and trap cards that keep you from taking any hits.

Yu-Gi-Oh is all about strategy and out smarting the other player and as it goes on it becomes more and more intense. The more cards you unlock the more opportunities for deck types you have.

So anyone whose looking to play this game I highly recommend it as a long time fan. It is a little different than the actual TCG itself but its still a blast to play and has a lot of nostalgic value.

So grab your duel discs and get ready to d-d-d-d-duel! 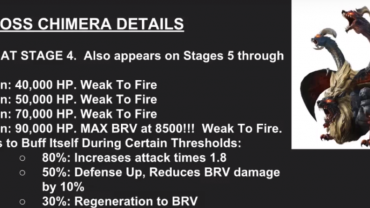