Teenage Mutant Ninja Turtles: Legends has flipped onto the mobile scene with pizza in hand and high action turtle power! I’m going to run you through some of my tips and tricks, so you won’t get shell-shocked while playing this game.

One of the main combat mechanics in Teenage Mutant Ninja Turtles: Legends is picking the right target to fight based on the type of character you have. Your character can be either neutral, strong or weak vs the enemy character. For quick indication there are  up arrows to indicate a strong match up, meaning more damage against that enemy.

For a weak match up, there will be a down arrow, meaning you deal less damage- even if the enemy is lower level. If there is no indicator you will do the standard amount of damage to the target. This also applies to the enemy AI when they are attacking you. 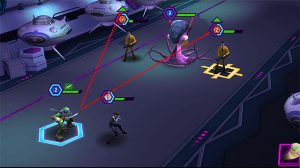 As you build your team you will want to include a variety of types so you can combat the enemies of that stage. So going forward you not only have to think about how many damage dealers, tanks and healers you will bring but if they are right for the level you’re on. This becomes important later on when you are clearing Hard mode levels. 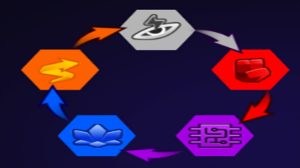 For the combat indicator this means you will see a red down arrow, if you’re using a purple type against a red type. Where as they will have the advantage against your character.

When it comes to clearing normal stages or Hard Mode you will gain the same amount of XP doing either. The loot will change depending on the stage regardless of the difficulty. There is a higher Pizza price for clearing a Hard Mode stage. The price rises from 6 Pizza slices to 12 pizza slices but the main benefit of clearing Hard mode stages is gaining DNA, DNA is what you need to unlock your character of choice. 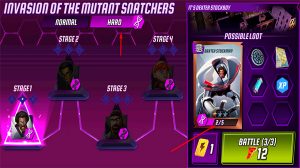 Each character requires a specific amount of DNA which can only be obtained from completing their stages or in some cases only be obtained through opening up card packs but keep in mind this is also a random loot drop, meaning you will have to clear the stage  or open multiple packs  to unlock the character. 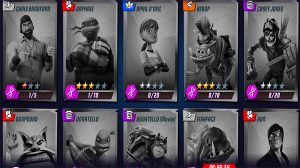 After you completely clear a map on normal, go back and complete the hard mode stages before going to the next map. This’ll give you additional XP to level up your characters, it also keeps you from moving into the next stages and immediately losing because you’re underlevel.

This is also how you can quickly add Spider Bytes and Newtralizer to your roster within the first hour of game play. It will make the game a lot easier with them on your side.

Daily Missions are a great way to collect xp, mutagen, greenbacks and even warp passes. Not only will you get the benefits of completing stages but you’ll receive all of these extra items on top of it. You want to complete these anytime they reset, especially the ones that provide warp passes. 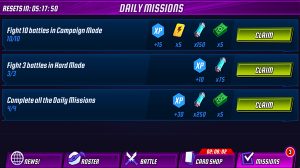 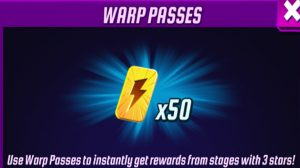 You can earn or buy warp passes, they will instantly clear stages that you have already 3-starred to obtain the rewards from the stage. Hold onto these and only use them on hard mode stages. They still require Pizza slices to use but they are invaluable when it comes to finishing a stage to unlock a new character. 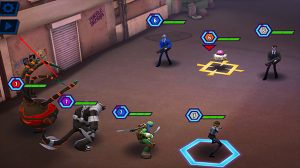 Once you unlock the auto play feature you can enter any stage, click the play button and the computer will play out the entire battles for you. This is a great way to clear normal or hard mode stages for items. It can work on new stages as well but as your enemies become stronger, the greater chance you have of the computer misplaying and causing you to lose, so use it wisely. Nothing can beat well thought out ability usage. 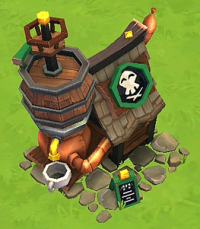