Learn the basics with this Unison League Guide for Beginners. We’ll take you through everything you need to know as you start off your journey and teach you about the things that will help you start this game off right.

When you start out in Unison League you will have your choice between five different types of character classes in each with additional advanced classes unlocked later on through game play.
Soldier – A sword and Axe wielding tank class.
Lancer – A Lance and Scythe physical damage class.
Archer – A Bow and Guns physical and magical damage ranged class.
Cleric – A Book and Relic using Healer / Buffing class.
Mage – A Staff and Charms Magical damage class. 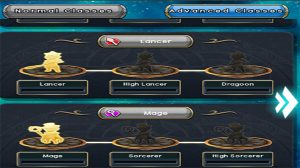 Try to stick with one class when you first start out. I know it will be tempting to switch around (It’s free to change classes) but you want to work on forging the rings for your specific class and it requires a lot of proficiency points, so you may not be able to master them all.

So try to stick with your first class until you’ve mastered it, then switch to something else or make an alternate account if you want to explore different class types. But if you really can’t help yourself you can find the class changing option under the Gear menu or alternatively make a new account to see if the other classes suit you.

Try to find an active guild within Unison League, this will help you out in completing missions in the long run and make the game more fun with the social aspect of a guild. So not only will you benefit from the bonuses of being in an active guild you will have people to talk to while you play the game. You will want to add and accept friend request as they will help you get Friend Points and help you on expeditions.

There are several forms of questing. Main Quest, Sub Quest and Event quest. The main quest follow the story line of the character. Questing is done in waves, with the final wave having a boss battle. While in a quest you have the option to do the battle yourself or to allow the CPU to auto play your character which is handy when you’re just grinding out XP. Occasionally when you’re doing quest you will get paired up with other players doing the same quest. When you complete a quest you will gain Gold, Proficiency, XP and items. You will also have the option to add any player as a friend and to vote for a MVP. MVPs receive additional Friend Points (No, you can’t vote for yourself!)

Sub quest are side story lines, and event quest are quest that happen at certain times both unrelated to the main story line quest. 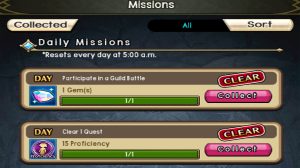 Gems are used to buy things from the shop. You can earn gems by just playing the game, you will find a lot of them through achievements, either doing certain task or quest so make sure you check your achievements menu and collect all of your gems. You can use your gems in the Spawn menu on Gem Spawns. For a certain amount of gems, you can spawn gear. This is great starting out and can lead to some really useful gear early on in the game.

Gems can also be used for expanding your inventory, expanding your gear locker, quest keys, restoring AP, quest boost and reviving. So while its useful to use a few on the beginning gem spawn for starter gear try to keep some on hand for later in the game.

Expeditions are a time based mission for your pet that allow you to send it on a mission which will be for several hours, when it comes back it will have various free items for you to use. Try to use this as often as you can, even if you’re not playing the game actively, it’s a great way to fill your inventory up.

Equipment ranges from your weapon, armor and Unison summon. You can have one main equipment piece which functions as your appearance slot unless you change it in the cosmetic menu and up to 4 sub equipment slots which are used to boost your damage or defense stats but don’t visually show up. Certain pieces have a “Cost”. You are required to allot cost to put on more powerful pieces of gear.

In Unison League you can level up your gear through Augmenting. By using 5 items as material and some gold you will increase the level of the item you’re augmenting. Augmenting an item increases its level and its damage. You will have plenty of material to sacrifice to level gear and its a great way to increase your overall damage. 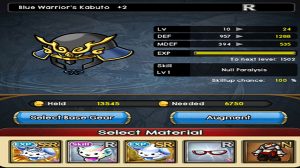 Reforging upgrades your gear / weapon to the next rarity level but you can only do it when that piece of gear is at its current max level. On top of that you will need the required reforging materials to reforge your piece of gear.