Kuja is a black mage with extremely high magic power and comes armed with a set of powerful skills that is good at clearing regular monsters. He has +20% Mp and Magic, which really increases his damage output by having more mana to cast spells. You can also stack more mp+20% abilities to further increase his maximum mana pool. He also has mp drain, which can be used to his advantage if he runs out of mana.

In terms of skills, Kuja only has a few. Barthundara is great when fighting heavy lightning based enemies, particularly the Europa, the Colosseum S-5 beginner boss. He does massive lightning damage using Plasma and barthundara will help with this. Dispel is useful against enemies with positive status effects. His 2 strongest AoE offensive spells are Thundaga and Graviga, which are both great spells against regular mobs. Graviga takes 75% health right away and Thundaga will be able to finish most monsters.

He is also very versatile and can learn all 3 types of magic. His limit burst is AoE magic damage and his trust master reward is Flare, a strong single target magic spell.

The downside to using Kuja is that his equipment selection is not the best and I would prefer he had more than 1 elemental AoE spell.

Verdict: Only max him if he is your strongest black mage. ExDeath, Kefka and Golbez are ahead of him as black mages.

Kuja is takes 50% more damage from Light and Wind element. He takes 50% less from Earth element. That makes him quite vulnerable to taking more magic damage. Equip him with spirit bonus items to reduce that magic damage taken.

Kuja does AoE magic damage to all enemies.

Kuja’s equipment selection is quite limited.


A beautiful and cruel angel of death who sought to destroy the world of Gaia from the inside out. He is a Genome, an artificial life that should not have independent will – and yet he does. Despite this “flaw”, he is ordered by Garland to throw Gaia into chaos and help their home world absorb it. He plots to betray Garland, who sees him as no more than a tool to be used. But he falls into a spiral of despair when he learns that his lifespan is nearly spent and becomes self-destructive, intending to take the entire world down with him. 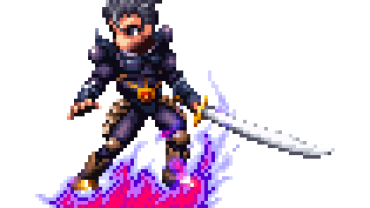