Home
Anime
The Evolution of Naruto Shippuden Characters – How Are They Now? 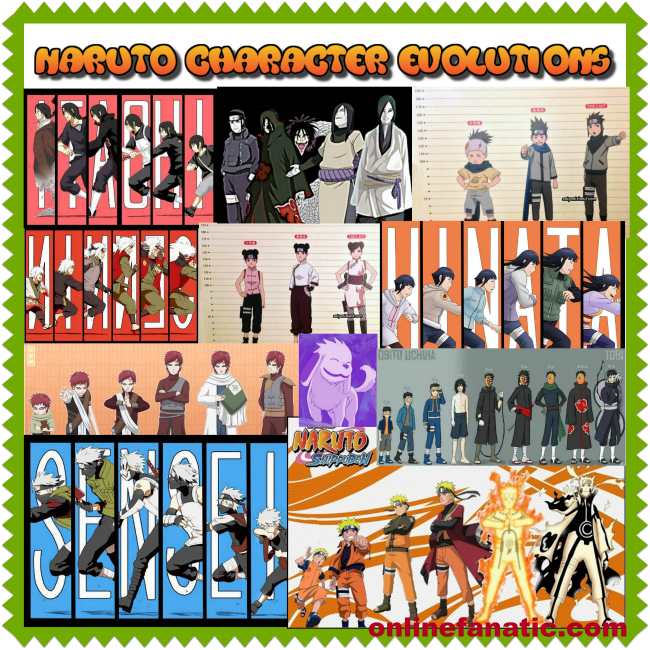 With the Naruto Shippuden manga coming to an end earlier this year, the long running ninja series has a final conclusion. Now it is time to take a look at the evolution of all our favorite heroes and characters of the anime. I am sure you would look back and go “wow!”, my character has evolved and matured beyond what he/she was back then X years ago when I watched it. And so the nostalgia begins… 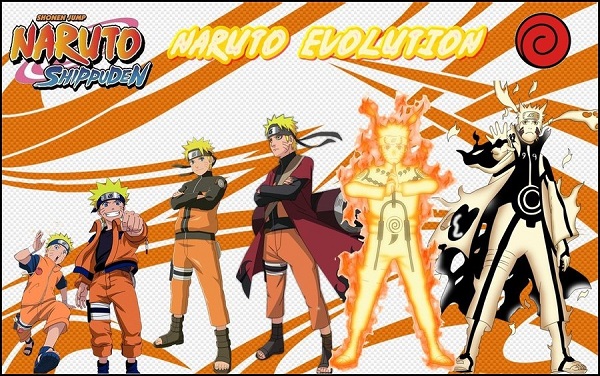 Of course, we can’t justify the greatness of the Naruto series without talking about the great Uzumaki Naruto himself. He starts off as the underdog of his village with everyone looking down on him for being the “odd ball”. He didn’t give up and always used other methods to gain the attention of his fellow ninjas by either being funny or causing a ruckus. His motto was always to never give up and that is his ninja way.

At least for me, that inspired me to always do my best on anything I do. Perhaps that’s why I am always attached to him in the series. The first act of being someone great is during the fight against Haku as Naruto and Sasuke do their best to defeat him. His friendship with Sasuke was always strong, despite them “not getting along”. It wasn’t until Sasuke’s pursuit for power that started to strain the bromance.

As Naruto grows up into the teens, we see that he wears a black/orange suit and has gained quite some power. The growth is seen with his big battle against Pain in Konoha Village. In his quest to become Hokage, he starts to tame the nine tails within him and soon gains control over him, which is depicted by his orange flame later in the series. 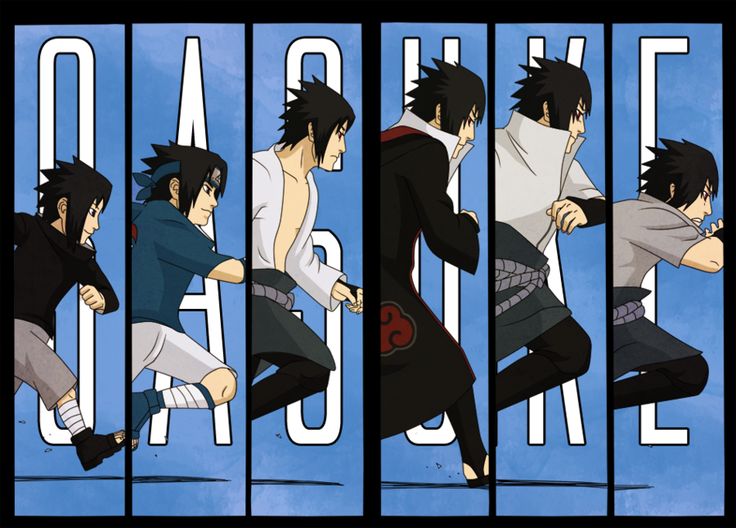 For Sasuke, he seems to be everyone’s favorite in the beginning as he is cool and handsome. Despite the tender age, he is skillful and is quite the lady killer. Once he hits the teenage age, he is already considered a force to be reckoned with. Despite that, he still yearns for more power and decided to join the dark side with Orochimaru luring him down the dark path by giving him a taste of raw power.

His attire also changes from blue to black(Akatsuki era) to indicate that. In the end, he comes back to the aid Konoha after years of hatred of his brother and the village. 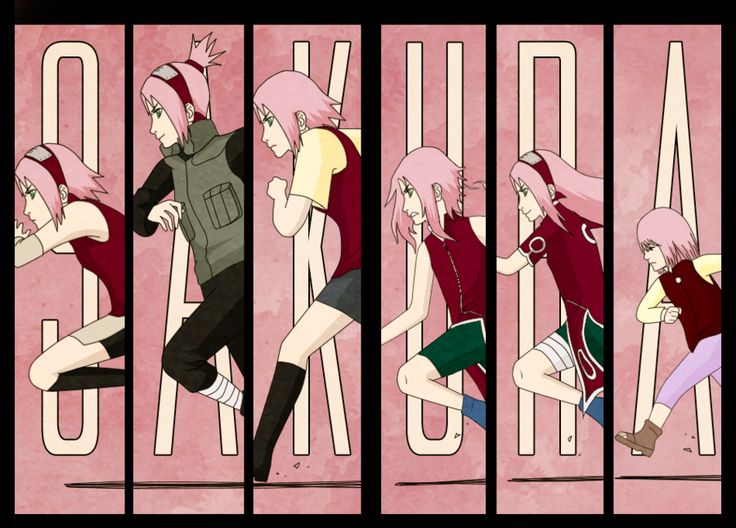 Sakura starts of quite weak and is a cry baby that is in love with Sasuke. I think at one point her judgement gets clouded by her love for Sasuke, which is evident during the search for Sasuke. Sakura starts off with long hair during her childhood and then her hair gets shorter in Shippuden. Her main characteristic is her super human strength that resembles her sensei Tsunade.

I just feel that the author didn’t give her enough development throughout the show and therefore my impression of her wasn’t too good. 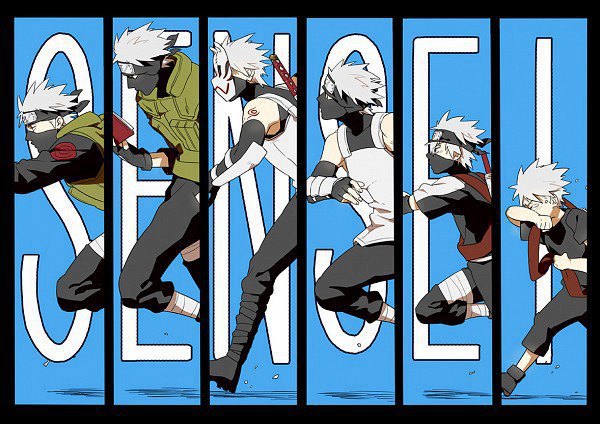 Our favorite squad teacher for the Naruto, Sakura and Sasuke is probably the only character we will never get to see his full face. His evolution is quite simple and is depicted by the ANBU attire and then the traditional Konoha attire. He also never seems to age past his initial appearance. But then again, who ages in anime? Look at Ash Ketchum. He looks exactly the same now then he was back in 2000. 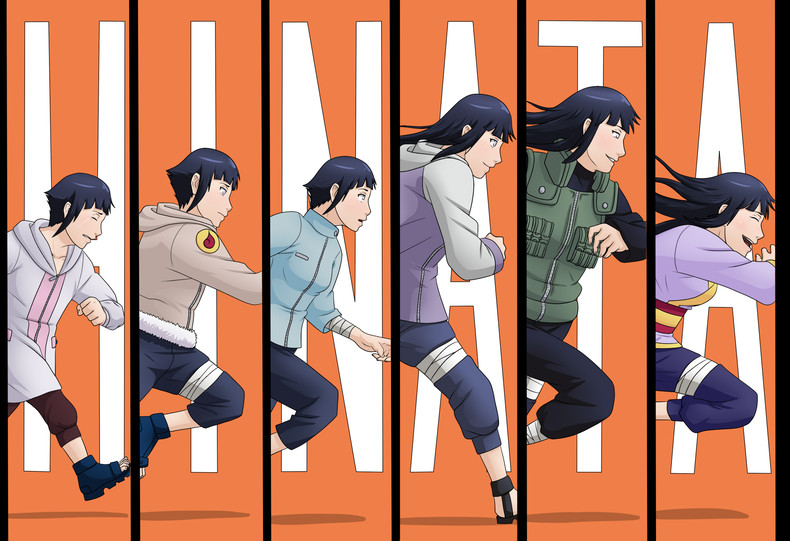 Hinata has been crushing on Naruto since she was a little girl. I guess SHE HIT THE JACKPOT. It is like nailing the richest and most talented man in the entire country. Hinata herself is shy and her appearance really shows that as well. At least she finally gets to be with Naruto. After countless faints throughout the series every time Hinata gets in close contact with the fine man she is secretly in love with, she deserves it.

Her evolution is quite simple as she has short hair with a bang. As she gets older her hair gets longer. I personally like her with short hair. It is much cuter in my opinion. 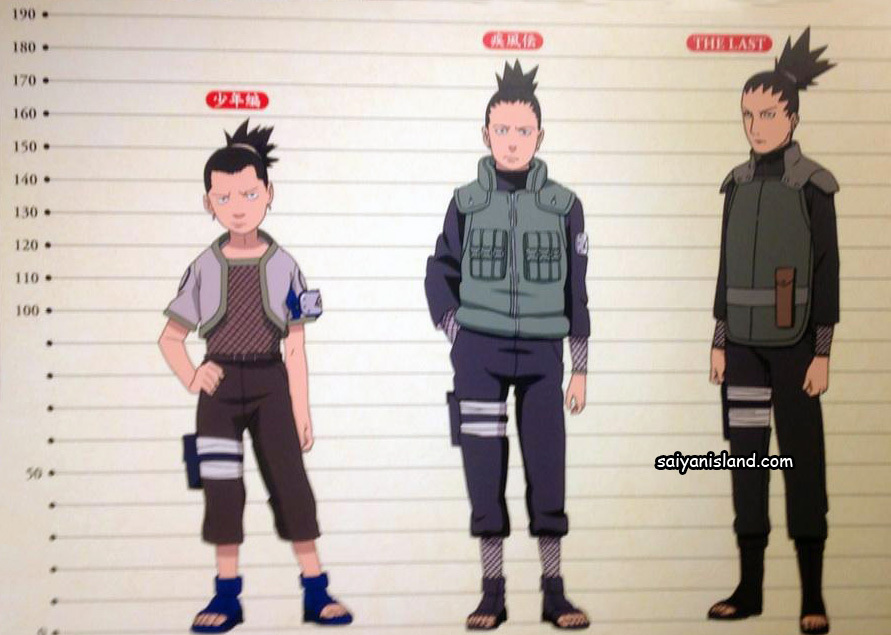 I think I like Shikamaru’s kid outfit the best. It fits his “lazy” look and everything he does. He is considered the highest IQ guy in Naruto’s batch and I always enjoyed his calculated battles in the series, especially his fight against Temari. 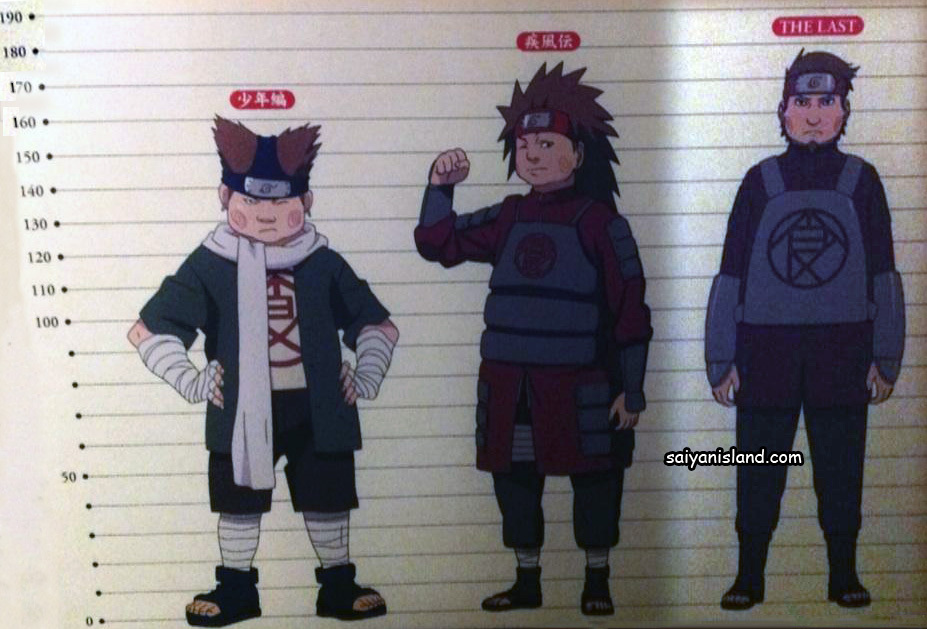 Chouji loses his chubbiness as he gets older. I am a little disappointed as he gets older. They should have kept the round and chubby child all the way to adulthood. Oh well, at least they made him consistent with his chip eating habits. 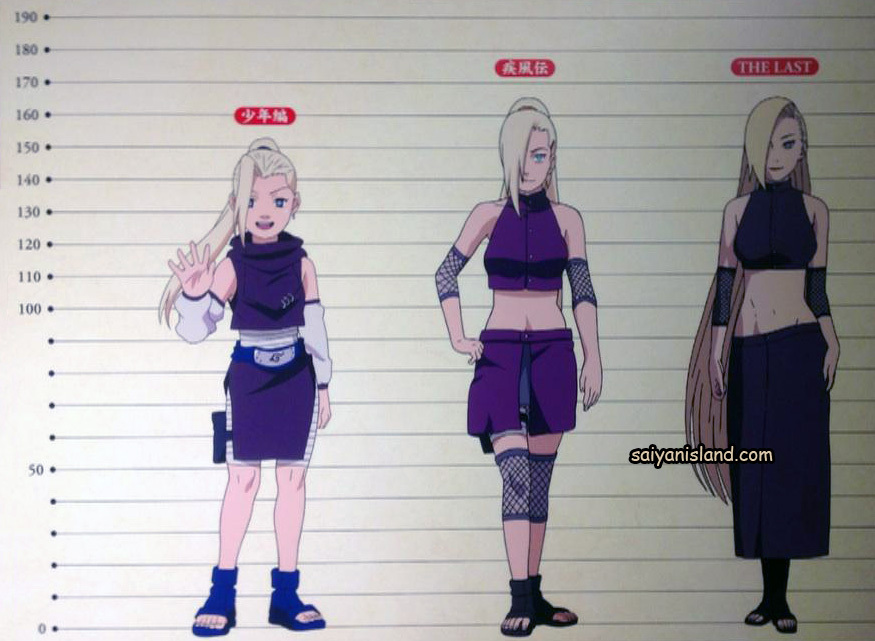 Ino’s growth is quite noticeable as she turns from being cute to very feminine and lady like. Being Sakura’s eternal rival since childhood, I think she wins in all fronts in my opinion. 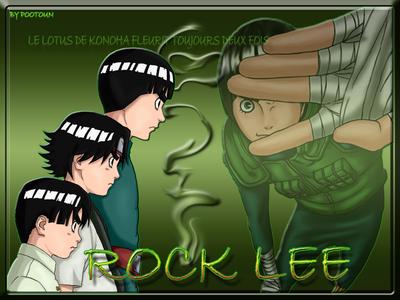 Rock Lee is probably a tribute to Bruce Lee and his fighting style is very similar to him. He doesn’t seem to change much aside from his attire. He is very easily recognizable with that notorious green suit. 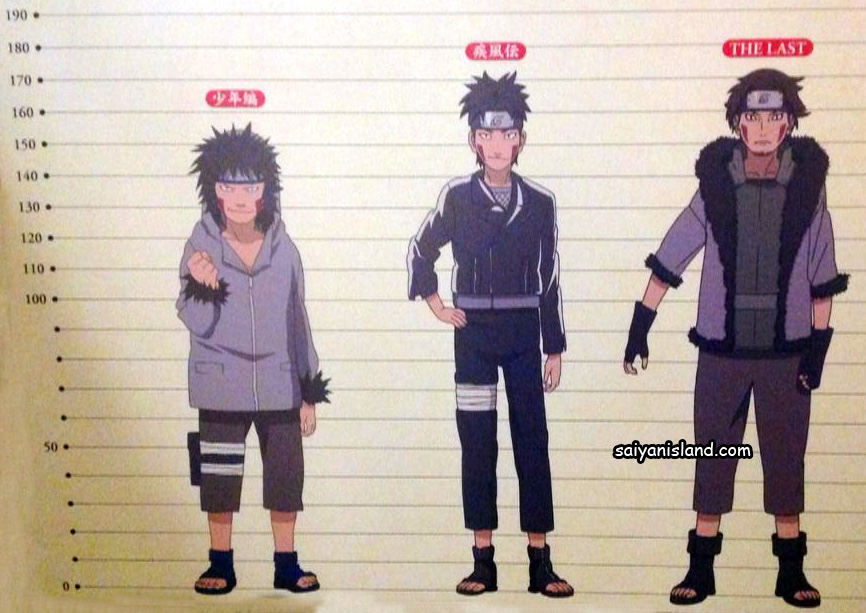 Getsuga Tenshou!!!! That is always my impression of him alongside his trusty sidekick, Akamaru. He has matured well over the years and I seem to like his teenage version the best. But we can’t forget about his cute Akamaru as well! 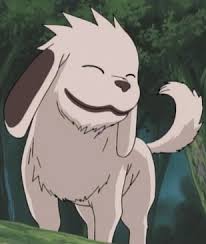 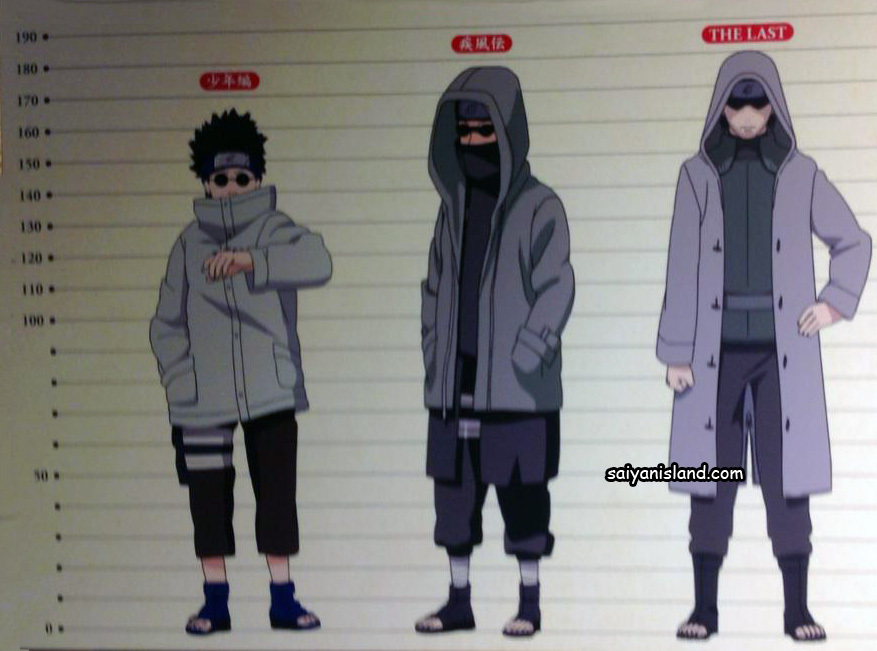 It always creeps me out when I see him when I was younger. However, I have grown on to like him as a character with all the smart and tactical moves he does every time he battles. He definitely loves to cover up and it shows as he gets older. 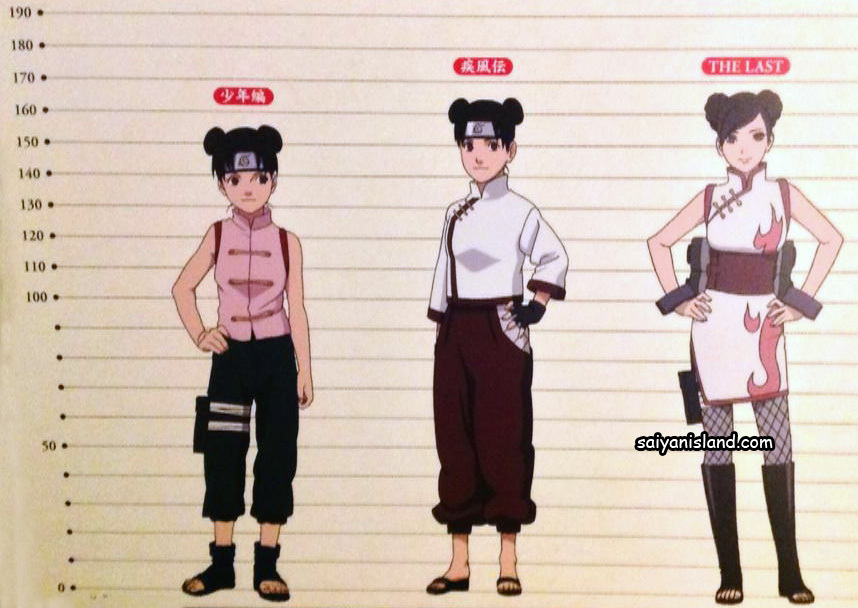 She reminds me of a ninja version of Chun Li, but unfortunately, she doesn’t get the screen time Chun Li does in street fighter. She also looks the best in Naruto Shippuden. 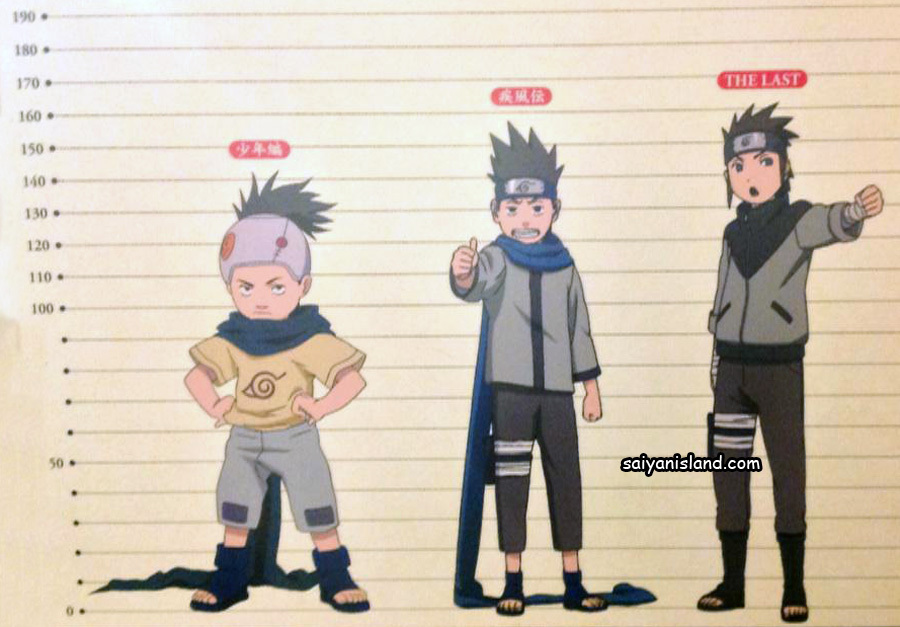 Much like Naruto, Konohamaru is also a trouble maker and is also a mischievous one. He looks up to Naruto and “copy” everything he does, including the sexy jitsu, which has given me plenty of laughs along the way. I still like his youngest version the best, as he starts to stand out less and less with his attire as he gets older.

Gaara’s younger self is very scary due to his crazy and unstable personality. It wasn’t until Naruto knock the senses out of him that he become better as a character. While he lost quite a bit of his power since losing his Jinchuuriki, he retains the serious look as he ages and eventually becomes the sand village Hokage. I like how he develops a great bond with Naruto after the fateful fight in the Konoha invasion.

As for his outfit, I like the Shippuden version much better. He looks cooler and less like a psycho path. 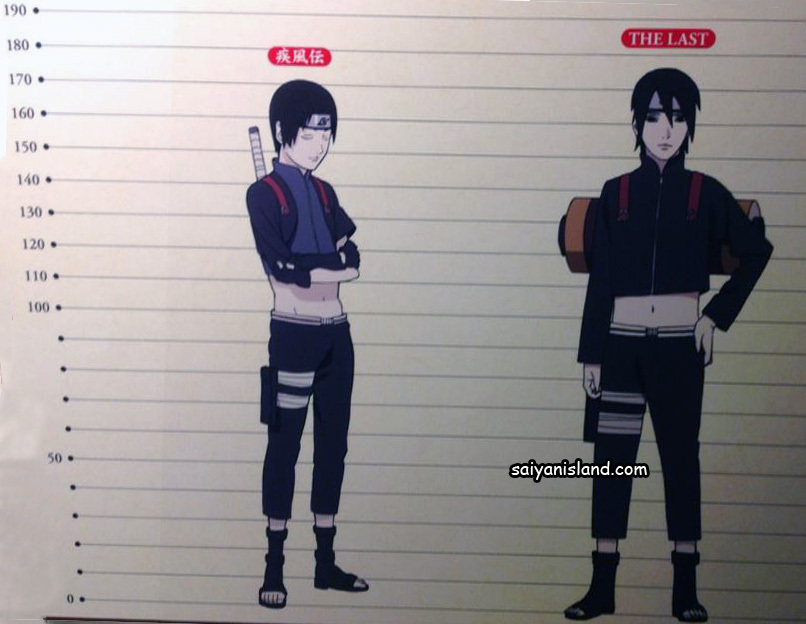 Haha, I can’t help but think Sai is gay with that outfit. Sorry Sai fans, I can’t think of anything else to describe him. He looks much better in the movie though.

The villain’s evolution looks the best in my opinion. He looks very geeky in the teens and then turns into a beast of a ninja, with that mask of his concealing his identity and also adding a shroud of mystery to him. He is also one hell of a villain too. 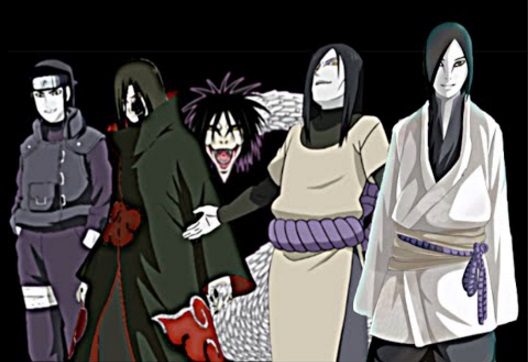 Orochimaru is probably the slimiest character out of the show. He definitely lives up to being the snake, as he sheds all kinds of masks throughout the series. I do like his first appearance the best. His other versions become too crazy for me to comprehend.

Well, the third Hokage was a fine young man in his time. He also suffers a weakness to sexy women just like Jiraiya. Too bad he bit the dust way too early in the series. RIP! To be fair, Naruto or Tsunade wouldn’t be Hokage if he was still alive. That makes me wonder how the story would have gone if he had survived his own jutsu? 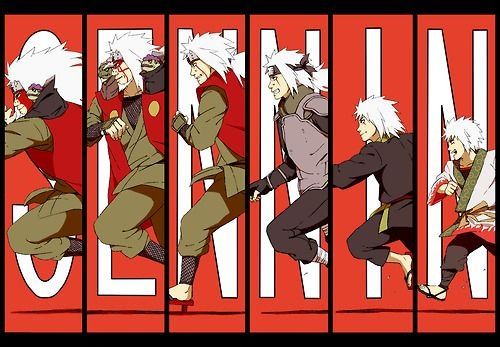 Ero-senin was probably the “weakest” san-nin in my opinion. He spent way too much time goofing around in his younger days. Had he trained seriously, he probably would be an even more powerful force to be reckoned with. But then again, Naruto probably wouldn’t master the Sage Mode that quickly. 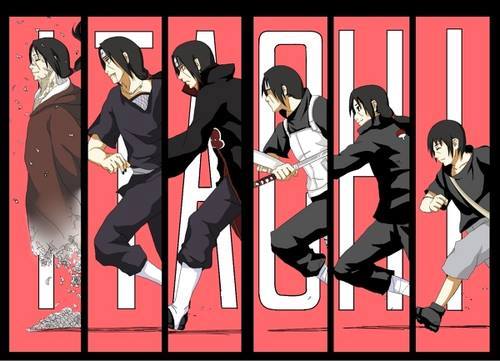 Itachi is probably my favorite character in the Naruto series. He is put in a tough spot as a young kid and has a lot of burden to bear due to the nature of Sharingan. Someone was busy cutting onions in my house when Sasuke finally defeats Itachi in that fateful fight. I am just glad he got some show time in the Fourth Shinobi War.

There you have it guys! Hopefully you had a great time seeing the changes of each character in Naruto. It sure brings back a lot of wonderful memories for me, at least.