This is a beginners guide for The Walking Dead: Road to Survival. We will be providing tips and tricks to help you be better at this game.

This is quite a fun RPG game that resembles some of the popular turn based mobile games such as Summoners War and Brave Frontier. I like it and the combat is quite bloody.

Let’s go over about the basics of the game.

Exp Bar(Top Left): Tells you your level and how much experience you need to the next level if you click it.Your region and account code is also shown,

Food: Used for leveling and upgrading your characters. They are also used to craft items and upgrade the material storage.

Material: Used mainly for upgrading and building your town buildings.

Survivors: You get survivors joining you after scenario battles. They are then used in the training grounds to train new characters.

Coins: The real money currency. These can be used to hire better characters, speed up building process and refilling your energy.

World Energy(Red Tank): The world energy is consumed when you battle in scenarios. Each time you level up, the max capacity goes up by 1. The energy refills by 1 every 10 minutes.

Raids(Green Tank): This is the energy for PvP. Each time you raid an opponent’s base, it takes 1 raid energy. They refill by 45 minutes.

There are primarily 4 character types. They are:

Characters have a grade of 1★ to 5★. Higher grade characters will have better stats and better leader skills. You can try your hand at getting rare 3★ to 5★ characters by recruiting them with coins. The recruit rate of 4★/5★ characters are very low though.

There are melee and ranged weapons. Depending on the character type, it defines which weapon they can carry.

Pistols and rifles are great against walkers during battle that are far away or are protected by walls or barricades. Melee weapons can get blocked when walkers are behind barricades and walls. Each weapon also gives bonus stats to the character. Weapons ranged from 1★ to 5★. 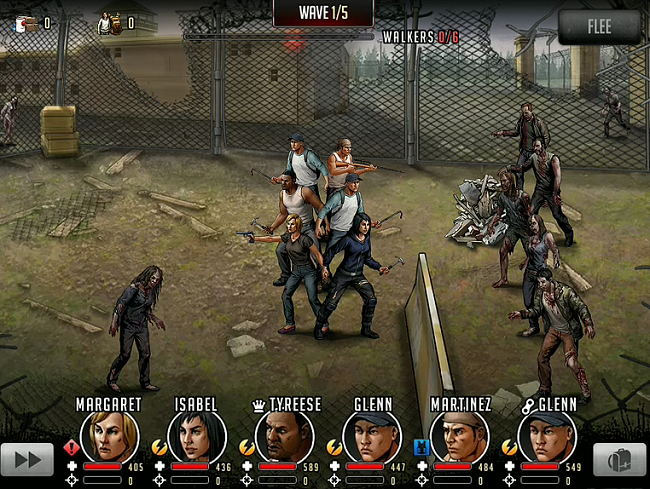 You will be fighting either against other humans or walkers.

Humans will be able to attack you after your first turn is over. Use the type advantage here to deal bonus damage.

You will always be surrounded against walkers. Since walkers have to be in melee range to attack your characters, you will want to kill them off before they get to you. There will be barricades that will make your melee character’s attack get blocked. It is always wise to bring at least 2 ranged characters. Normally, you will have 2 turns to take down the walkers closest to you. 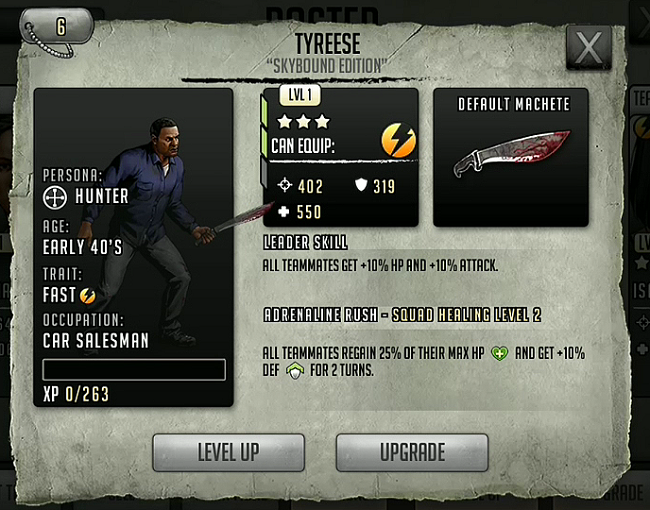 This is your characters special attack. You can use them once your yellow attack bar fills up in battle.

There are different types of adrenaline rushes:

For getting through tough scenarios, you will want at least 1 healer. For auto play and farming, you can just field all damage characters since you would run easier scenarios where you won’t die. You can also use faction members in regular battles after you have joined a faction at level 6. 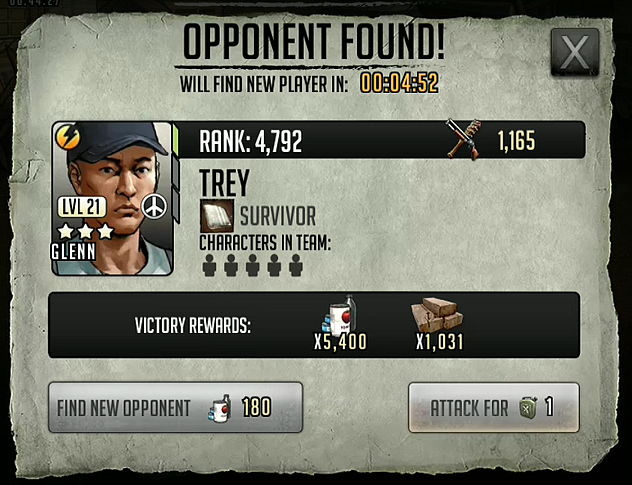 Raids are PvP battles against other players. You fight in a 5v5 battle which you can choose who to raid. At the start, just choose to fight people that have the most material and food. Since searching for opponents costs food(increases as you level up) each refresh, make sure to also target people with a at least 2000 food. You can also get tokens and rare prizes by ranking in the top 200.

If you don’t want to waste food, you can always get a new opponent in 5 minutes.

Home Base and Buildings 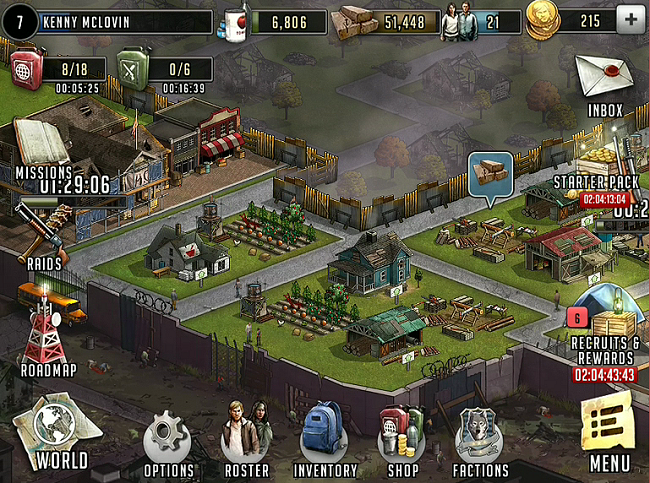 Another interesting aspect of the game is the resource and building management. You have your own town hall and buildings that needs to be upgraded in order to progress in the game. Here are the basic buildings you need:

Town Hall – Located at the left side, it allows you to build more new buildings and upgrade at the same time. It also unlocks new areas.

Farm – Generates food for you. Upgrade it to increase food generation rate.

Material Post – Generates material for you. Upgrade it to increase material generation rate.

Workshop – Allows you to craft items for use during battle. You can research new items when you upgrade the workshop.

House – This stores all survivors you get from scenario battles. Upgrade it to increase the max capacity.

Training Ground – This will train uncommon characters for you. Upgrading it will allow you to research different types of characters you can train. Creating a character costs 5 survivors. 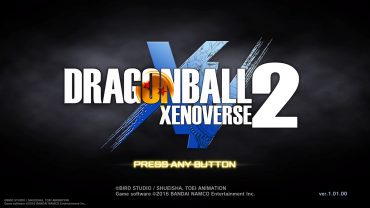