Welcome friends, to the DC Legends Tips & Tricks guide. This guide is built to help with understanding the games basics and a give a few pointers on getting better at the mechanics. We’re going to focus mainly on the Story Campaign and building your team of heroes. 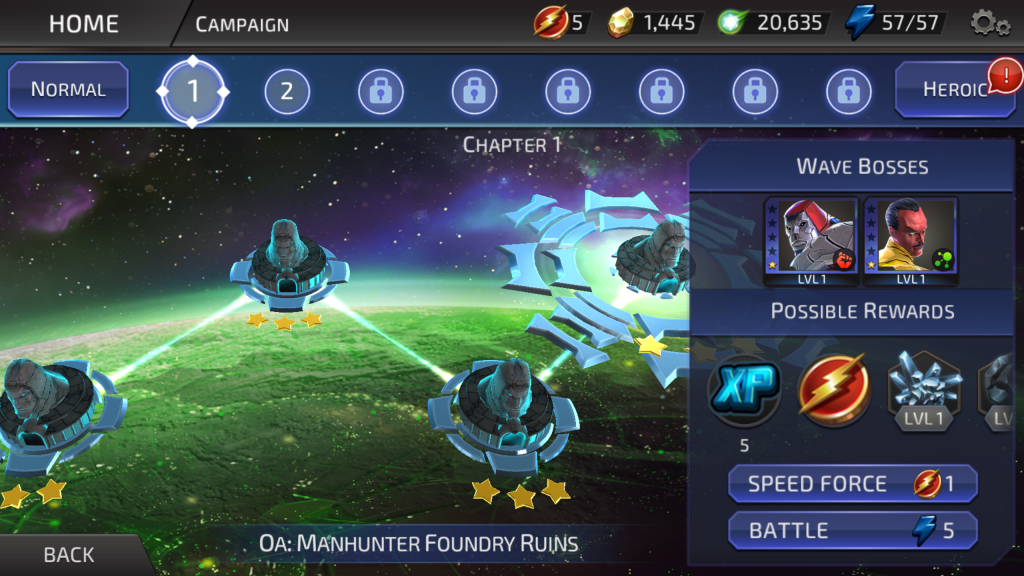 In DC Legends you play as a number of different heroes and villains from famous DC Comics. From Batman to the Joker all the way to Superman and Lex Luthor, there are a lot.

The game’s story is all about fighting the deadly Manhunters and freeing the heroes and villains from the evil energy controlling them. And through out these story missions are tons of goodies to obtain from XP to Gems and even Hero Fragments.

In the story you get to make a team of four heroes each with their own type. Strength, Magic, and Science.

The types are extremely important in DC Legends and pretty much build the entire mechanic system for the game. In each mission you go up against 3 waves of enemies each following the same types. 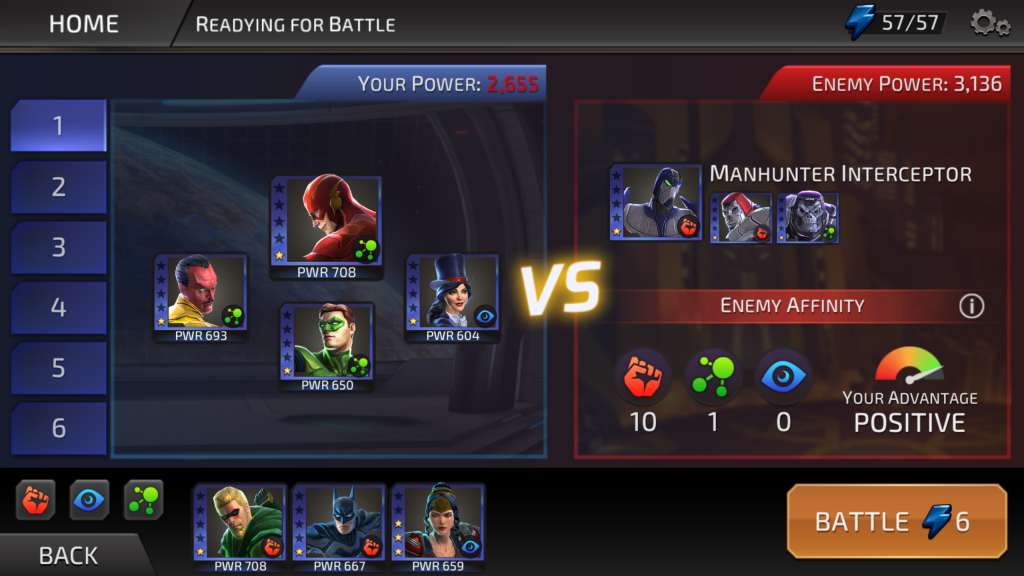 Each type is weak to each other in classic rock, paper, scissors fashion. Red beats blue, blue beats green, and green beats red.

So if you use a team of all reds against waves of greens and blues you’re going to be stuck between advantage and disadvantage. So you want to make sure to always build a balanced team and it forces you to use other heroes to do that.

It’s always best to have two of the same type in each team to give a higher advantage. So if the mission has primarily Red’s then you want at least two greens in your team like The Flash or Green Lantern.

If the mission has mostly blues then you go for reds like Batman or Green arrow. And if its mostly greens you go blues like Wonder Woman and Zatanna.

Paying attention to the types makes it easy to know what kind of team to build and what kind of heroes to have work together. On top of knowing the types it’s also best to know about each heroes  Super Powers. 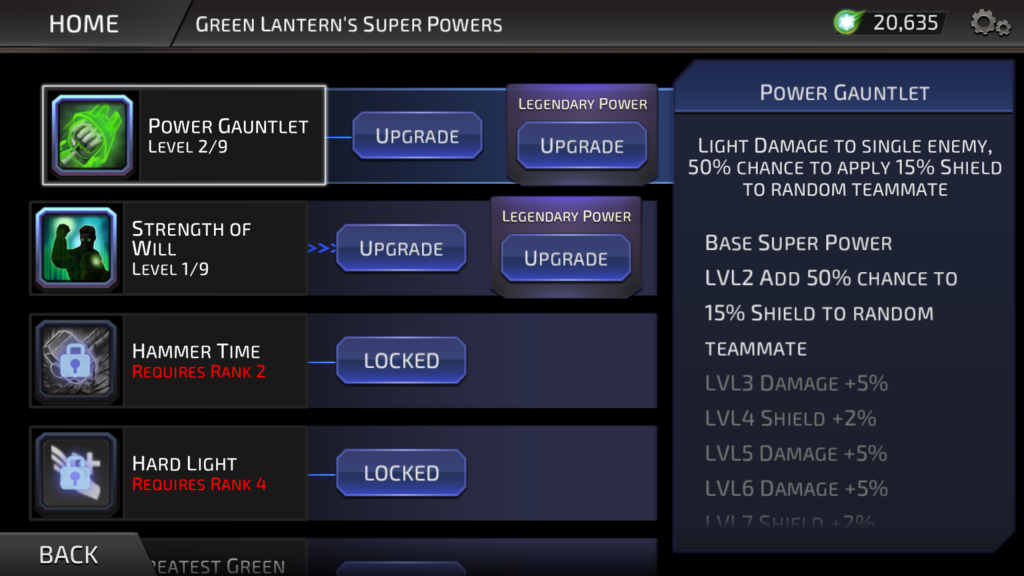 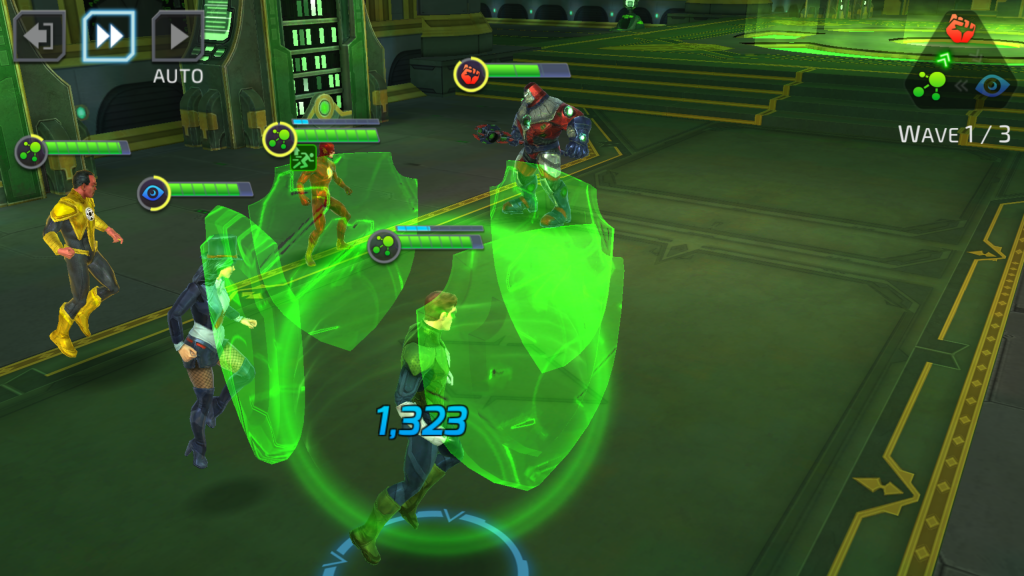 Heroes like the Green Arrow and Batman primarily have offense based Super Powers. From firing multiple exploding arrows as an AoE or doing heavy damage to a single target.

They also have their own buffing moves that typically work in their favor such as Batmans Smoke Bomb giving high Evasion which leads to lasting longer in a fight to deal more damage. Its always best to know the effect of every heroes Super Power so you can compare them to others.

The Blue heroes are the most supportive with most Super Powers being used to buff the team. Zatanna’s Stacked Deck heavily healing all team members while Wonder Womans Call to arms adds 2 Strength to the full team.

Having a good library of Blue heroes to mix and match is a great way to plan out what heroes you’re going to aim for. It’s okay to go for your favorites but watching the types may force you to end up using characters you may not have thought about originally.

Now the Greens are the defensive heroes in the game with most of their skills buffing up the hero themselves. Flashes Red Streak buffing his speed while Green Lanterns Strength of Will applies over 30% shield to him.

Super powers and hero types are extremely important in Dc Legends and lay the ground work for the entire game. So before you throw random heroes into a team make sure you know what’s waiting for you in the current mission and know which heroes powers compliment each other.

Now that’s not saying don’t use the heroes you like, chances are your favorite is going to be best utilized in any team as long as the rest of it fits well. So focus on learning and trying out different team match ups for every mission.

Now there’s all this talk about heroes but you have to be able to get some first. And in order to get heroes in Dc Legends you need to have Hero Fragments. 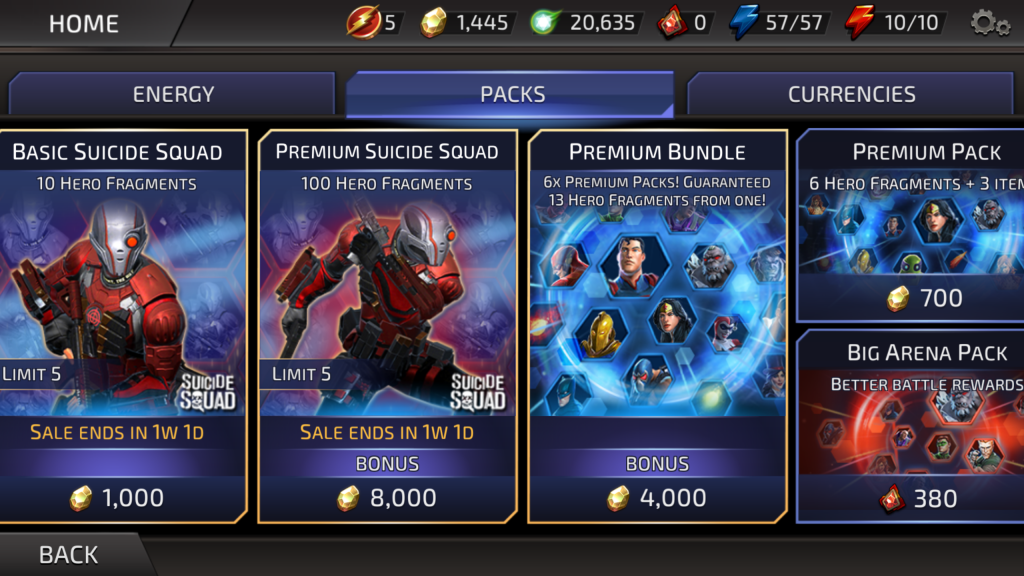 Hero Fragments are gonna be one of your main goals in Dc Legends. Everything you do is going to amount to you getting the Fragments you want for that special hero you’re holding out for.

Every hero has a different amount of fragments they need in order to unlock them. Some only need 10 while others need up to 90. So getting that many can be a hassle but there are ways to achieve such feats.

The most basic way is by spending gems to buy packs of heroes. You obtain gems just by playing through the story campaign and can even buy some if you feel like dropping a few bucks.

The basic will run you 330 gems and the Premium pack goes up to 700. But on top of them are bonus packs you can get that show up with different themes from time to time.

So keeping an eye on the shop is an important part of the game. Save up your gems and go for which ever pack fits you best. Paying a little at a time with the basic, paying more for more with the Premium, or saving up for the bonus packs.

Bonus packs are typically more expensive and can go up to being near 10,000 gems. But the rewards you get are worth it so how ever you like to spend your gems will determine the rate you obtain fragments.

So I hope this guide was helpful to some of you. Now you can understand the way the types work and how to apply heroes to your team based on their super powers.

Have fun saving the world, until next time! 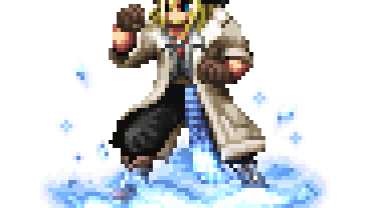