Rakshasa. Poor poor Rakshasa. In FFBE you’re either a physical DPS unit, a Magic DPS unit or a healer. Rakshasa falls in between the cracks of all three and is what is called a Hybrid Unit. Cool theory in that if a unit has a high defense Rakshasa is viable, if it has high spirit Rakshasa is still viable. Problem is that hybrid damage doesn’t work.

Rakshasa is a Physical DPS unit with no abilities, a Magic Unit with no spells, and a support unit with abilities that get resisted by almost every boss after Lanzelt. Rakshasa’s only single saving grace is Healing Waltz (Cure poison, blind, sleep, silence, paralyze, confuse to one ally) and if your using her for that, or at all for that matter, it means she is the 3rd member of a team consisting of Rain and Lasswell as the other two.

Rakshasa’s Trust Master reward is about the only redeemable quality she has, Holy Blade (Light hybrid damage (2.3x) to one enemy) is one of the stronger holy damage spells, and since it’s an attack ability any unit could equip it, but even then it’s still such a niche ability that if you were farming Trust Master Rewards, it would still have to be barely above Throw.

Rakshasa’s Limit Break, Rend the Heavens (Base: Wind hybrid damage (2.7x) to one enemy) has a cool name and that’s cool, unfortunately it’s also hybrid damage, so unless you have two Exceed Rings (unreleased) handy so Rakshasa could make the most of both the +ATK and +MAG parts of them then there is just is no point.

Verdict: Bad DPS as both a physical and magic unit, niche Trust master Reward, can support with Healing Waltz, but she will be the first unit to be replaced once you get better ones.

Rakshasa is neutral to all elements and status ailments.

Rakshasa can equip 4 weapons and 5 armors.

A mysterious swordswoman with considerable skills in magic who demonstrated her abilities in countless battles. Rakshasa never spoke of herself, and is remembered by history as a blade-for-hire who chose her friends and enemies by the rewards they promised her. She suddenly disappeared from the battlefield one day, however, leaving no hint as to her whereabouts. 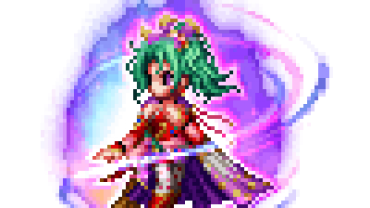