If Kain could ever get past his love interest Rosa, Fang might be the person for him. Fang is basically Kain with more elemental coverage, Esuna, Area Blast and less single target damaging abilities. Both are fun to play, unusable in arena (since Jump is banned in arena) and bring a unique style of play to FFBE. They should hook up so Fang could teach their kids Equip Spear. #stillabetterlovestorythantwilight

Fang brings along these notable active abilities:
• Jump (Physical damage (1.8x) with jump delay (1 turn) to one enemy), can’t be a dragoon without this.
• Flamestrike and Froststrike (Fire or Ice physical damage (1.4x) to one enemy, respectively), Fang, unlike Kain can take advantage of elemental weaknesses.
• Area Blast (Physical damage (1.8x) to all enemies), decent physical AoE damage for a 5-Star unit.
• Dispel (Remove all status effects from one enemy), always useful to have at least one unit with this move, especially if it isn’t on a healer.

Equip Spear (Allow use of spears). Fairly straight forward ability, allows your character to access equipment they otherwise could not. Elza’s TMR Demon Scythe being is the best of the bunch right now, and if you had Equip Spear, Demon Scythe and for some reason didn’t want to equip Demon Scythe on Elza you could equip it on some else cough Cloud of Darkness cough. Equip Spear is not a good as Garland’s Equip Long Sword, but that’s because Excalibur and Deathbringer are Long (Great) Swords.

Verdict: If you want to use Fang, are thinking about using Fang, haven’t started playing FFBE but want to use Fang, or are otherwise a completionist, get Fang’s Calamity Spear (Stats – Type: Spear, ATK+75, Element: Wind, Ability: Aero Blitz). It is the best non-TMR spear in the game that is accessible right now and gives Fang a pretty kick ass weapon for new players.
Niche Trust Master, good unit for new players, can’t compete with 6-Star base units. If you get Fang, it’s worth getting the TMR since the pool of good spears will only grow with time, but otherwise Fang is just a roster placeholder.

Fang is neutral to all elements and status

Fang can equip 4 weapons and 8 armors

A woman who appears in the tales of a world where the gods toy with humanity’s fate. Fang was a fearless, even audacious lance wielder—some might say a daredevil. Her tale tells that she became a l’Cie to protect her home world of Gran Pulse from an attack by the floating continent of Cocoon; however, her recollection of the incident remained sketchy.

What could never be in doubt, however, was her enduring affection for her friend Vanille; a love unequaled, having spent half a lifetime with her. 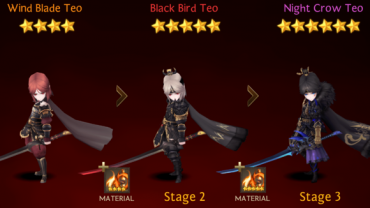