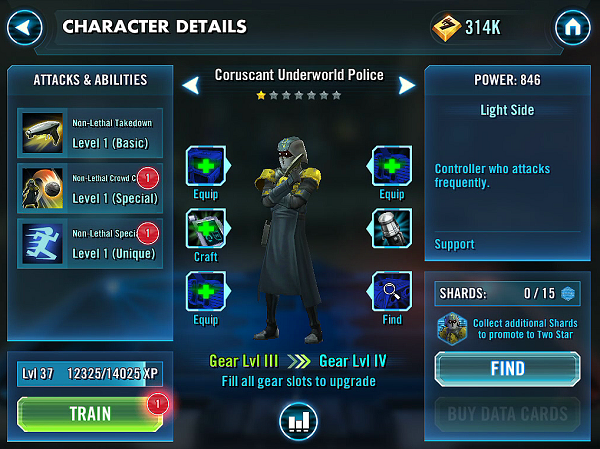 Coruscant Underworld Police is a support attacker. Let’s look at this brief guide and see what he has to offer to your team.

Basic Ability: Non-Lethal Takedown – Deal Physical damage to target enemy with a 50% chance to Stun the target for one turn.

Special Ability: Non-Lethal Crowd Control – Deal Physical damage to all enemies with a 70% chance to inflict Offense Down for 2 turns. (4 Turn CD)

This guy is actually decent if you choose not to go after an AoE damage team. He has the ability to stun using his first skill. He can also inflict offense down using his AoE, thus reducing the damage your team takes by half. That is a very useful crowd control skill to have. That skill works wonders against high damage enemies.

Alongside the Clone Sergeant, they make a decent starter team on your line up. The few downsides about this guy is that he doesn’t have a leader skill and his health pool is low.

Verdict: Only use him if you want an AoE team.