Hello fellow SWGOH players. Today I would like to present to you a very in depth arena guide. I will be giving you tips and tricks to climbing higher up so you can get your favorite characters a lot quicker in the long run. 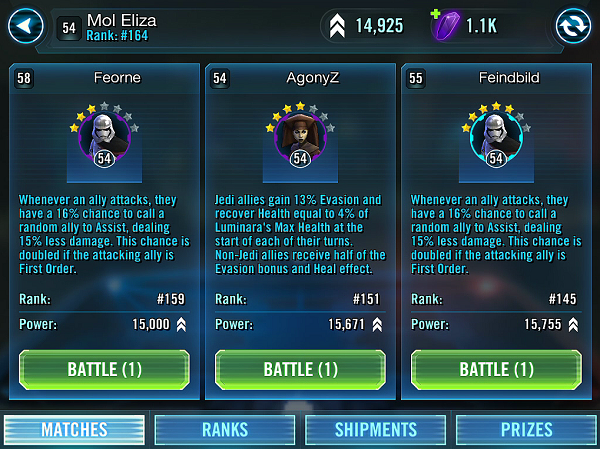 I personally am in the top 200 consistently, so I can give you some insights on what high level arena looks like and what you need to know. But before heading into the nitty gritty details on dealing with each character you will face in the arena, lets go over the basics and foundation of things to keep you ahead of 90% of the player base.

Now when it comes to focusing on gear vs upgrading your character to the next star, you should understand that gear is a lot easier to upgrade to 6 or 7 than it is to get a character to 6 or 7 stars. That means that if you want to make an arena team, you first and foremost should invest in gear on the characters you want in your arena team.

Since gear is about 50% of your power and stats, it means you get stronger a lot quicker just by having high level gear. Depending on what you pulled during the initial stages of the game, your team will most likely be composed of these 3 core members:

These three will be seen in lower ranking arena for a long time unless EA decides to give you other characters. Of the 3, most people will replace Chewbacca once they get someone stronger or can deal more damage. My suggestion is to gear up Jedi Consular first. 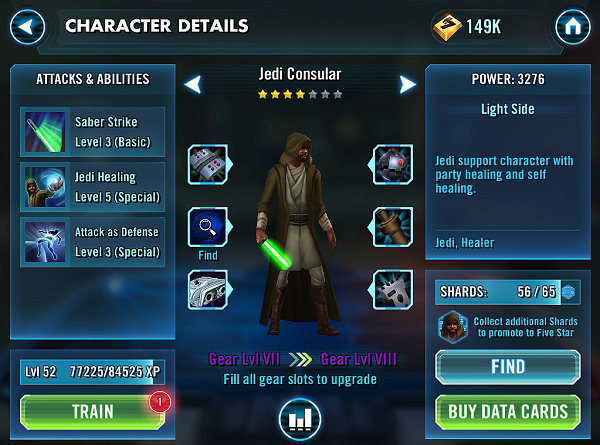 He is very good despite not being a “hero”. Jedi Consular’s gear is fairly easy to upgrade and I didn’t have much of a problem getting him to gear 6. He is currently at epic gear 7 and he is quite tanky. The reason you want him is because he is used everywhere. Until you get another decent healer like Luminara Unduli or Old Daka, Jedi Consular is indispensable to your arena team.

He will be in your arena team until you have enough characters to craft a solid core of PvP focused team. Talia and Chewbacca will most likely be on the back burner once that happens. Talia is still very good though. You can opt to gear her if you want her in your team.

The Cookie Cutter Team You Want Initially – Jedi Consular, Talia, Chewbacca, Luminara Unduli and Luke Skywalker. They are the easiest to obtain and you are welcome to switch around until you get the powerful characters.

The next thing you want to pay attention to is skill upgrades. Most skills unlock new “effects” once they hit level 3 or 4. For example, Jedi Consular’s first skill gives 25% chance to reduce skill cooldowns at level 3, so it would be nice to have it at that skill level before maxing it out. Just make sure to level skills to these power points where it will give your character an advantage in battle.

Another example is characters that can stun such as Count Dooku and Old Daka have bonus stuns to additional characters that requires higher skill grades to unlock them. Pay attention to them and make sure to unlock them once you have enough ability mk 1/2/3. These can be gotten from Squad Cantina battles or from the dailies. 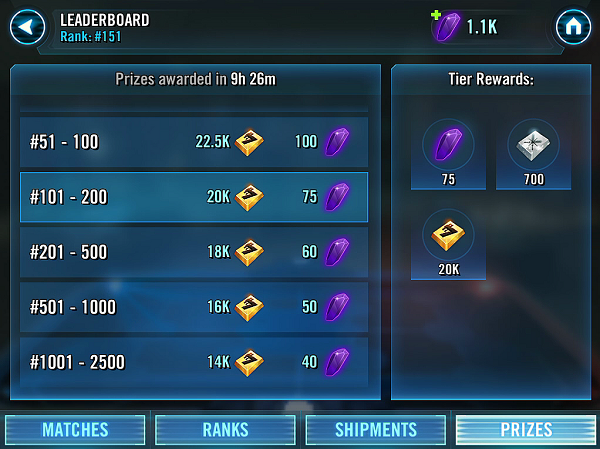 This one is fairly straight forward. As a beginner, I would suggest you aim for top 2500. The reason is that you will be able to get 400 arena tokens per day, which is perfect for getting 5 character shards of your choice from the arena shipments. You can attain top 2500 easily with a team lead by Jedi Consular, Chewbacca and Talia.

The next goal would be top 200. Then I would recommend you try and stay there unless you want to challenge for top 10 and also get more crystals per day. The reason is because the rewards have diminishing returns(aside from crystals) the further you try to move up to top 100 and higher. At top 200, you get 700 arena tokens and with the daily quest for 100 arena tokens, it allows you to buy 10 character shards per day. Here is the table for the rewards:

Tough Characters in the Arena

This guy is everywhere in the top 1000. First of all, he has the healing immunity debuff, which messes up 99% of the healers excluding Barriss Offee. Its a joy to have him on your team and sadness for you on the enemy team. His AoE deals damage over time, which is useful against high health members. Plus that 35% evasion against Jedi’s means you won’t want to use a Jedi heavy team against this guy. To combat against this guy, you need to run Luke Skywalker/Droids or any heavy damage dealer that isn’t a Jedi. Barriss Offee is good against him.

This guy is so powerful its ridiculous, especially against Jedis. His AoE skill and basic ability deals double damage to Jedis. So if you have a full Jedi team, be prepared to lube your butthole and get royally screwed. Thankfully, he is squishy. You need a fast guy like Count Dooku or Luke to nuke him down before he messes your team up.

While most of the time she won’t be a problem, you will lose to a well crafted team of Captain Phasma, First Order TIE Pilot, Poggle the Lesser, Count Dooku and Darth Sidious. A fast team totally will kill off at least a member on your team unless you have a fast character as well. It is the bonus damage on off turns that will catch you off guard. Your best bet would be to nuke down the First Order TIE pilot as he deals a LOT OF DAMAGE.

A well geared and high star TIE pilot can one shot any of your squishy targets if you let him get a shot off. Your best bet would be to kill him before he messes you up.

This guy hits hard when geared. Take him down! His AoE deals a lot of damage. You need a speed team to beat him comfortably.

He has immunity debuff. Don’t attack him when he has retribution buff. He will destroy your healers. His damage is very good as well, especially below 50% hp. Time your damage and finish him off at 60-70% health before he wrecks you.

As long as you don’t run a Jedi heavy team, you should be able to easily nuke him down with non Jedi damage dealers. Bring 1 single target damage dealer in your team. AoE damage dealers are not a good choice against counter attacking teams. 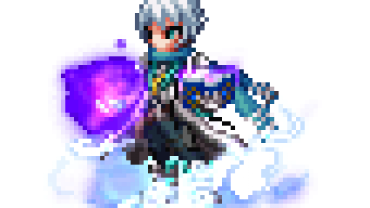