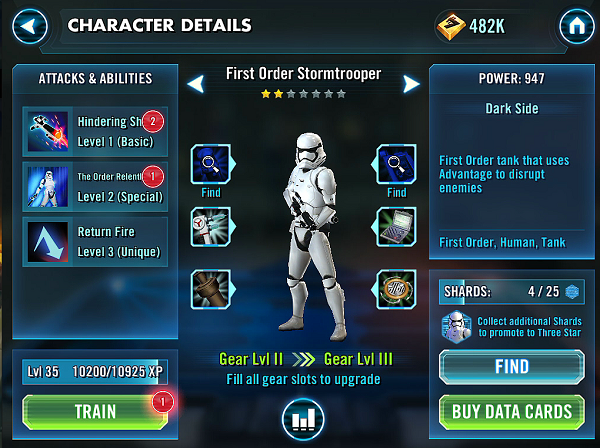 The First Order Stormtrooper is a tanky guy with counter abilities. Let’s take a look at what this trooper has to offer.

Basic Ability: Hindering Shot – Deal Physical damage to target enemy with a 45% chance to inflict Speed Down for 1 turn. This chance is doubled if First Order Stormtrooper has Advantage.

The First Order Stormtrooper is a very tanky character. I personally use him in the INT gear challenge during the daily events. He doesn’t do much damage, but he can counter enemies, which will add up if he gets attacked often.

He has a lot of health when you gear him up, so he works great in dark side campaigns if you need a tanky member. His advantage bonus will give him some added fire power when needed. He also works very well in the FO team alongside Kylo Ren, Captain Phasma and First Order TIE Pilot.

I suggest you level him to about 40 and use him for the INT gear challenge member.

Verdict: Level him enough as a backup character.