Gau is a 5 star character with good stats for his rank and standing as a Physical Damage character. His build as a character fits well with his role though his skills leave a little to be desired.

Gau has a lot of physical damage attacks, one magic damage, and some poison attacks. Those together are all fine the physical damage ones are pretty much his staple moves that’ll be used above all others.

So all of his skills are based around dealing damage and that’s good for his role. But the downside of his character is his final skill Leap.

Leap is a randomized effect skill to where you have a chance for a number of different effects to take place. Now this isn’t necessarily a bad thing but it’s not really a good thing either.

Gau has some great effects in his Leap skill, some that are pretty powerful and useful in their own right. But he’s also got some pretty bland ones that could be annoying if you got the same one in a row.

He’s a fairly basic 5 star character and doesn’t really have much difficulty in learning how he plays. His only real issue is the randomized final skill and that’s entirely based on opinion.

Verdict: Fine for a basic 5 star

Gau is neutral to all elements and status ailments.

Gau can equip 2 weapons and 3armors.

feral child from another world where magic and espers once lived. Gauwas abandoned by his father as a babe, and consequently grew alongside the beasts of the region known as the Veldt. Although he is not adept with words, he tries to communicate his emotions through gestures and physical motions. Eventually he runs into Sabin and his friends, who are en route to Narshe, and demands food from them. After Sabin gives him dried meat to earn his trust, Gau joins the party to show his gratitude. In turn, this ultimately results in him permanently joining the Returners on their efforts against the empire. 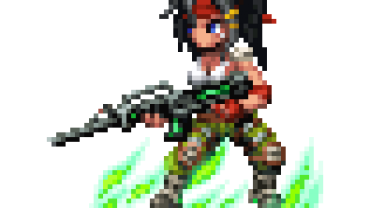