Agrias might be inferior to a 6-Star unit but she is still one of the best 5-Star units to have right now. If you can’t pull a Delita or a Ramza, pulling Agrias would be a decent door prize since she also has some great debuffing abilities that make her tied with Warrior of Light in the 5-Star support role.

Save the Queen! And what better way to do that by being proactive and using it to pwn some monsters? At +112ATK Save the Queen is almost as good as Excalibur, but if it’s on a tank unit, Save the Queen’s secondary ability of Auto-Protect might make it a better fit. Having this sword just might make you the Queen Bee.

If you don’t know how awesome stop is, imagine this, your party is all but wiped out, Agrias is the last unit standing, only a sliver of HP left, you have no hope of winning so in a desperate gambit you use her limit break and it connects. You now have 3 whole turns to get back on your feet and go win. Yes, Stop is that awesome.

Strictly speaking any 5-Star unit going forward will probably be inferior to a 6-Star unit, but units like Agrias will come every now and then and give those 6-Stars a run for it. Agrias is well balanced, does a great job at what she is supposed to do, and has a niche limit break that compliments her abilities rather than does the same thing as them (looking at you Ramza).

Awesome Trust Master Reward, awesome Limit Break, fulfills her role as a support very well. No tanking abilities to speak of, but she would be good a support on melee centered team, solid character all around.

Verdict: A viable character in the support role.

Agrias is neutral to all elements and status ailments.

Agrias can equip 7 weapons and 8 armors

A woman who appears in the tales of holy stones known as auracite in the distant world of Ivalice. As a holy knight, each devastating swing of her sword was charged with a sense of justice and honor. Her position as a knight of the Lionsguard, which protected the royal family, led her to become Princess Ovelia’s personal bodyguard.

Sympathizing with the sequestered life the princess led, Agrias threw herself into the heat of battle to protect her from all harm. She would later find a kindred spirit in Ramza, with whom she braved death numerous times throughout her mission to guard the princess. 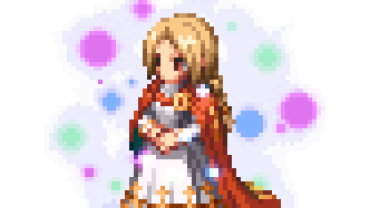