This list says something when Ultima is in the last spot on it. Ultima is the best spell in the game hands down, does lots of AoE damage and bypasses resistances. But Ultima does have a few weaknesses, it requires any unit to have at least a Black Magic Level of 8, cost a hefty 60 MP per cast (The –ga spells are only 20 MP) and can be eaten by Celes’ Sealing Blade. Ultima is by no means bad, but it’s not a spell that can be used often and it high cost make it better suited for when you’re facing a group of tough monsters. When the PVP arena comes to Global, Ultima is a player favorite because of that reason, but since this game is still very PVE centric, Ultima’s uses now are more limited.

High attack weapons hold spots 9,8, and 6 on this list because once you get your units leveled to max only by having great gear can your character progress further. Newcomer Delita brought an awesome weapon that can be widely used since it’s a sword and most characters have access to that weapon slot, being Dark Elemental can be a blessing or a burden based on resistances, but right now it’s neutral being as most things outside of a Diablos equipped unit won’t have resistance to Darkness.

Excalibur was the best weapon in the game prior to the release of Rank 6 units. If you had one, you were awesome, if you Dual Wielded two, you were Godly. Well to be honest you still are, but there is a new best sword in town, but Excalibur isn’t going to let go of its throne quite that easily. While only a few things have resistances to Dark, almost nothing has a resistance to Holy, and Diablos equipped units are negatively resistance to Holy meaning in a PVP setting Excalibur will still shine brightly.

What could be better than having awesome defense, and more attack or more magic? Putting it on an item that most characters can use. Being a clothes item, odds are if you have a Brave Suit it will be on someone. Mineva Bustier might be better on a healer unit with its damage reduction and high spirit but Brave Suit is the best in slot choice for DPS units.

It might be odd that the Dark Knight version of Cecil has the better weapon since this seems to be going in reverse of what the story of FF4 was, but Man-Eater makes this weapon instantly better than its light version counterpart. When PVP rolls around this weapon will be the arena favorite for melee units since almost all playable units are considered humanoid and will take the extra damage that having the Man-Eater effect will confer. Excalibur might be the anti-Deathbringer, but Deathbringer is anti-almost everything else.

Increase ATK (+50%) when equipped with a katana

Oddly none of the best weapons were a katana even though right here is a passive ability that strictly only confers a benefit if you have one equipped. Well yes, Blade Mastery is like, here’s my fancy butter cutter, let’s make it hit as hard as Excalibur, ‘kay thanks. Blade Mastery also works in great synergy with Dual Wield, you can have a Deathbringer and a Sakurafubuki or use a Chirijiraden if you want the fire bonus damage, and since you have a katana equipped in one hand you can have whatever beat stick of choice you want in the other.

Doublehand is for those of us who rolled a Bartz and not a Zidane (myself included in that group). While not being nearly as good as Dual Wield, it’s not a bad door prize. While Doublehand suffers from the fact that it forces a character that can use a weapon and a shield to only use a weapon it’s bonus to ATK power could be well worth it if you have the gear to support it. As of 10/14/16 the max attack power that Doublehand can confer is 108 and that forces you to use a very specific gear selection, Dual Wield is at 120+ (since you can use any gear you want, some of which like Brave Suit would be far superior to Black Belt Gi which would be the Best In Slot for Doublehand).

Doublehand though does find its niche in helping out Bow and Harp users, since neither of them can use Dual Wield. So that Killer Bow equipped Artemios you have that still collecting dust might be just slightly better off now that he’s using both his hands to use his bow.

It will be a while before Barrage stops being the benchmark of what makes a melee unit great or not.. Lightning was the first unit to usurp Chizuru without having Barrage, but Lightning does have plenty of other tricks to compensate for that, one of which being an innate Dual Wield ability, but being able to do an extra 320% damage over your base attack per turn will never not be worth it. Barrage also has a very low MP cost at only 16 MP, meaning most units could just endlessly spam this one ability until they win.

Special – Use magic twice in one turn

While you may find it odd that Dualcast and Ultima are the only two caster specific Trust Master Rewards on this list and that Dualcast is so much higher in rank than Ultima, which is of course the best DPS spell you could cast, Dualcast offers so much more than just being Ultima X 2. The amount of utility this Trust Master Reward gives a unit cannot be underestimated. Any ability that is black, green, or white magic can be used twice in one turn in any combination of ways. Raise and Curaja, Osmose and Osmose, Deshell and Ultima etc. Dualcast is why Krile even in her 4 star status is an okay end game unit, and it’s also why Krile in her upgraded 5-star status is still okay even today in the Japanese version of the game.

Allow use of weapons in both hands, except bows and harps

Well it may come as no surprise that Dual Wield reigns supreme over all other Trust Master Rewards. Just how awesome is it you ask? I’ve seen a Dual Excalibur and Sakurafubuki  Wielding Lightning with a beefy attack of over 600, yes some other Trust Master Rewards were used (Blade Mastery, Lunge Combo, ATK +20% [from the market a few months back]) but still… That unit could solo most end game content right now.

*Your Team is Victorious!*

Well it’s not quite that over powered, but it is getting close. Also did you know that Dual Wield helps casters as well? Since only bows and harps can’t be Dual Wielded, staffs and rods can, mean Dual Wield is also one of the better caster enhancements as well. 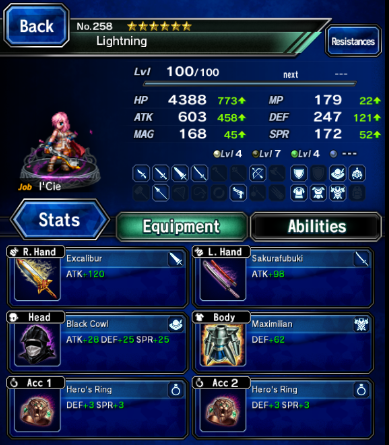 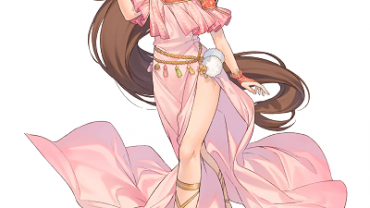