Dark Fina is a character based around Magic Damage. And with her stat layout and skill setup, she is very well suited for filling that role.

Her magic stat is pretty good and should be for the damage she’ll be dishing out. Her skills are built very well to suit her and her magic is just as good.

Her ability Revoke is also very good because it gives her 100% resistance to Silence and that is an amazing thing to have on a magic focused character. So combining her resistance to the ailments she can dish out makes her a pretty good DoT or Stall character.

And her strongest spell is Ultima. It hits with a 2.8X multiplier and ignores 25% SPR to all enemies. And what makes her even more effective with her magic is her skill Dual Black Magic.

Giving her the ability to cast two spells in a row kind of makes her a magic powerhouse. And her final skill pushes her over the top.

Her final skill Dystopia has a 2.8x multiplier with a consecutive damage increase of 1.6X for 3 turns. So all of her magic and Dystopia’s damage over time effect sets her up as a highly usable magic attacker.

Her downside is that of any magic based character and that is how easy she is to take down. Her defense is low and she can’t wear any real defensive armor. So she’s a glass cannon, she’ll hit hard but shatter easily.

Verdict: Dark Fina is a great character to use if you’re looking for good Magic Damage.

Fina’s alternate form, a powerful attack magic-wielding warrior. Though completely different from the mysterious-yet-adultlike girl Rain first came across, the sincerity she shows from time to time is just like the old Fina. She seems to yearn for being given power, as if she has some sort of mission that depends on it. 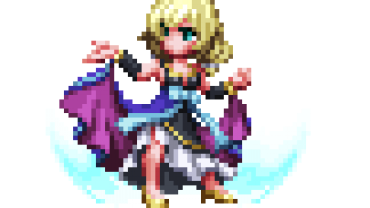