Maria is a 5 star character with pretty decent stats and is a Healing role character. Now for a healer her stats are pretty much what you’d expect them to be.

She is built to support the rest of the team and die very easily so there’s not going to be much of a variety when it comes to play style. That being said she is outfitted with all the spells any white mage would need.

Abilities give her a few basic buffs making her less of a fragile character but they really don’t do anything special. Keep her protected by stronger characters and keep those other characters alive.

With her spells she has exactly what you’d see a White mage having. All levels of cure, a heal for almost all status ailments, and raise to bring back fallen allies.

So as far as White Mages go she is out fitted pretty well to be put in any party. And her limit burst is actually really good and plays up on her healing capabilities.

Life Rain is just a team wide heal that cures everyone a set amount of HP. Having it maxed really helps when its used and after using it she can continue to throw her White Magic onto her team continuing the constant strain of heals.

The downside to Maria is the fact that she is so fragile. But like any mage you really can’t expect anything more than that.

She’s not meant to take damage or deal it out she is meant to keep the real fighters alive and keep everyone going. So her downside is that shared with any other White Mage.

Maria is neutral to all elements and status ailments.

Maria can equip 3 weapons and 4 armors

A young lady who appears in a tale of rebels and empires, in a far-flung world. Driven from her homeland after a strike by the Palamecian Empire, she joins the rebellion alongside her childhood friends Firion and Guy. She worries deeply for the fate of her lost brother, and is devastated when he reemerges before her as the evil emperor’s Dark Knight. Though strong of spirit, she is profoundly affected by the death and suffering around her, and wishes nothing more than to regain the peace she once knew. 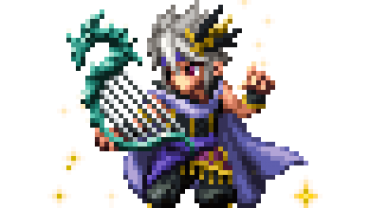