His skills make him viable in a fight giving him a lot of damage capabilities. His skills Aim and Burst Shot both deals out heavy physical damage.

Aim having a 1.2X multiplier attached to it and Burst Shot having a 1X multiplier but a 100% critical chance to one enemy. Most of his skills are designed to do quick physical damage which is good for quick victories.

Multiburst is more of an updated version fo Burst shot, having the same effect except with an AoE effect on the 100% critical. Burst Delta is another skill that deals  Physical damage with a 1.3x multiplier with a 10% HP drain to all enemies.

Trey’s final skill is honestly nothing too special but isn’t horrible for a five star. Dynamite Arrow has a 3X multiplier and gives a delay effect for 1 turn.

His limit burst is Arrow Shower and it’s actually not that bad. It deals fire physical damage with a 3.45x multiplier and ignores defense 25%.

Now his downside is pretty crucial. He can only equip one weapon and his armors are not built for any heavy defense. So for the damage he does the lack of armor doesn’t really help his case very much.

Verdict:  Trey is really just a run of the mill 5-star. There are better 5-stars in the game but you’re better off with a 6-star.

Trey is neutral to all elements and status

Trey can equip 1 weapon and 3 armor

A young man who appears in the tales of a world divided into four nations that individually control their own unique Crystals. Trey is a member of Akademeia’s Class Zero, and a cadet in training to become Agito, the legendary savior or saviors. His excellent marks make him one of the most intelligent cadets in the class, and as such he has a lot of wisdom to impart on others. However, his tendency to ramble on without end often causes his classmates’ patience to run short. In battle, he can take enemies down from great distances with his bow. 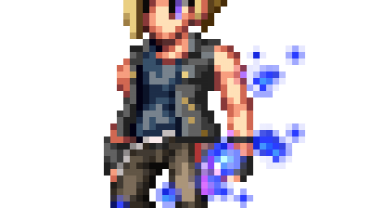