Xiao is a monk, and monks are cool because they know Kung-Fu. Unfortunately Xiao seems like she’s still a young grasshopper with a few needed years of training left to go before she can become the PWN Master we all want her to be. Her first step in being awesome? Equipping her own Trust Master Reward Kaiser Knuckles (ATK+101 Element: Wind.) Ouch!

Xiao is a mixed bag of abilities, some like Raging Fist (Physical damage (1.2x) with ignore DEF (25%) to one enemy) and Kick (Physical damage (1.1x) to all enemies) play into her Monk background, but others like Counter (Counter physical attacks (30%)) and Last Stand (Increase DEF/SPR (20%) when HP drops below 30%) are better suited on a tank.

Speaking of tanking, Xiao does have an awesome self-heal in Chakra (Recover HP/MP (30%) and cure poison, blind to caster) but without having a Tier 2 Golem with Provoke (Increase likeliness of being targeted (70%) for 3 turns to caster) it prevents Xiao from being viable.

Xiao’s Limit Break, (Devastating Combo – Base: Physical damage (2.7x) to one enemy), is limited in that it only deals single target DPS and even then is only slightly better than other units with a single target DPS Limit. Xiao’s though suffers from poor access to quality gear.

Xiao’s unfortunately has a few drawbacks that keep her from being top tier. Lack of gear selection and only being able to use Fist weapons keeps her viability as a DPS unit down, while you can get the ATK +61 Murasame, the ATK +82 Enhancer, and now the ATK +72 Shining Splendor. Xiao’s best weapon outside of her own Trust Master Reward is the +40ATK Poison Knuckles which isn’t available until the Marada Coast Exploration. Xiao looks like a 4 Star unit with a 5 Star rank, and is easily outclassed by other 5 stars.

Her 6 star version makes her a bit more viable, with skills that focus on ignore defense.

Verdict: Mediocre DPS, great Trust Master Reward, good tanking abilities and can be viable if you have an upgraded Golem.

Xiao is neutral to all elements and status ailments.

Xiao can equip 1 weapon and 3 armors.

A precocious brawler, whose young age belies her considerable mastery of the martial arts. Bright and cheerful, she is beloved by many. Her techniques have been passed down in her family from father to son, mother to daughter, but there were those that saw them as dangerous relics from an arcane age.

Some believe her smile was a means to protect her people from the prejudiced eyes of the outside world as she used her skills to help the weak and defenseless. 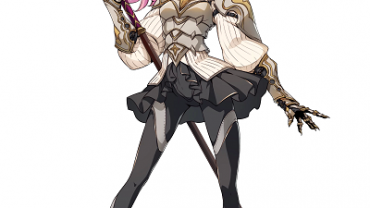